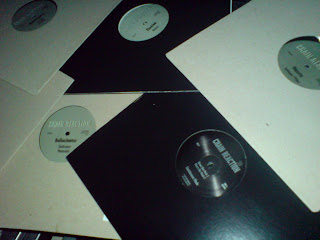 Earlier this evening I was studying the fetishistic imagery over at Hard Format, and in particular Colin's mouthwatering collection of Chain Reaction compact discs, photographed in such detail and clarity you feel like reaching out and touching them. I'm a little jealous because I don't have them myself, though I do have a modest selection of the label's 12" output, but this is one of those instances where the CD catalogue is cosmetically superior to the vinyl, which is nearly always packaged in plain beige or black sleeves with their trademark battleship grey label art. Chain Reaction is/was a subsidiary of the Basic Channel empire, which, from 1995 - 2003, released a steady stream of product inspired by the original sonic blueprint created by Moritz Von Oswald & Mark Ernestus. Perhaps it is an indication of their generosity of spirit that Oswald and Ernestus chose to create the label specifically to release the music of their disciples, and it's output far outstrips that of the original host label. I'm not sure if the imprint is currently dead or dormant, but most of the 'first wave' imitators (Substance, Vainqueur, Monolake, Torsten Pröfrock, etc) have since carved out careers of almost equally legendary status in the field of minimal/dub techno.

But there was a second wave of producers who's names don't trip off the tongue quite so regularly, some of whom seem to have disappeared off the map (unless of course they release so anonymously that no one even realises they're still active). One of the most prolific of the latter-period Chain Reaction artists was Konstantinos Soublis aka Fluxion. Tracks like "Haitus"(from CR-24, 1999) saw him galloping headlong into the abyss - the monumental repetition and magnetically slow pace of development creating a thunderous calm. Devoid of nearly all dynamic gear changes the rhythm becomes a still-life to be contemplated for it's subtle details. It's quite strange that this track should sound quite current in 2007. Not enough time has elapsed for it to have attained a certain retro charm, but that seems to be part of the Basic Channel equation: the music is so hermetic and inner-focused that it transcends fashion.

Not all releases slavishly adhered to the original blueprint. A particular favourite of mine is "The Red Line" by Shinichi Atobe, which revels in an endless cascade of sweet melodic ennui; an uncomplicated expression of emotion that most artists on the label would rarely allow themselves to indulge in. As far as I can tell, the EP from which this track comes (CR-34, 2001) remains the sole release from this mysterious artist. Other acts, like Hallucinator, experimented with various tempos and patterns outside the standard 4/4 mindset. A track like "Waterline", from the labels' final 12" release (CR-35, 2003) is a gorgeous slice of meditative dubtronica, but it's doubtful it'd ever crop up in a techno mix due to it's languid, tripped-out groove.

Although most of these second wave producers don't seem to inspire the same level of reverence that Oswold and Ernestus enjoy, I still think there's plenty of wonderful music to be found nestling in the Chain Reaction catalogue. Perhaps now would be a good time for a full-scale re-issue program. Having many gaps to fill in my collection, I'd certainly welcome such a move.
Posted by N.E. at 2:18 AM