Record labels objecting to their tunes featuring in a 160kbps mix? 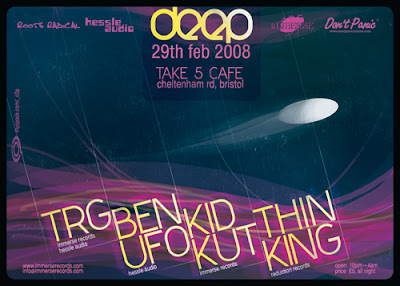 29th Feb sees the launch of a new bi monthly night 'Deep' brought to you by the promoters of Noir. The music featured will be an exploration of the forward thinking and experimental artists within the dubstep scene in the intimate venue that is Take5 Cafe in Bristol, sound supplied by Roots Radical. The format for each night is the same, two guests, each of which will have 90 minute sets so as to provide a detailed showcase of their own unique sound alongside residents Kid Kut and Thinking. The opening night sees Romainian rude boy TRG with his UK debut, plus Ben UFO, one of the co-owners of Hessle Audio, a label fast building quite the reputation with the recent Pangea EP, forthcoming Untold EP and the sublime Martyn Remix of TRG's - Broken Heart.
Posted by N.E. at 12:32 PM No comments: 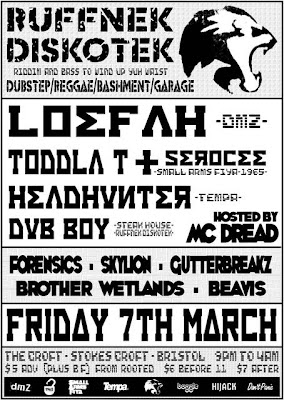 Is it really two years since I last played at Ruffnek?

Will Headhunter make good on his promise to play a dub techno set? 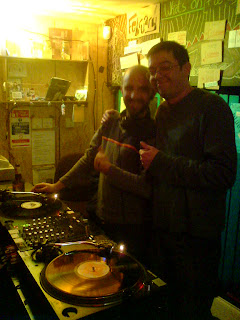 Just got back from the screening of Jimi Tenor's 'lost' documentary "Sähkö The Movie" at the Cube cinema. As expected it was a pretty lo-fi production, mainly shot on hand-held camera, with clunky edits between scenes. The fidelity of the film varied dramatically - some scenes were recorded on reasonably good standard video tape, others looked like they'd been captured on grainy b&w super-8 film. Some scenes looked so ancient they could almost have been recorded in the 1940s rather than the mid-90s. But that kind of added to the appeal. What little dialogue there was was mainly in Finnish, but there was a vague narrative, beginning with Mika Vainio at home in the studio surrounded by his incredible collection of analogue gear, then gradually introducing other members of the 'cast', including Jimi Tenor himself, as they went on their various adventures in Helsinki, Glasgow and New York. It combined live performance footage with oddly mundane scenes of the guys playing pool, drunkenly singing along to Lee Perry records or just sitting around glumly in train stations. I thoroughly enjoyed it! Before and after, myself and Under_score's Jim Petherwick played out the Sähkö 'classics' in the bar, along with other related/sympathetic sounds from the likes of Sleeparchive, Plastikman, Emptyset, Sandwell District etc, drank a few beers, had some good conversation with Duncun, Luke, Mike and others. Best fun I've had on a Sunday evening in ages! Watch out for the next Under_score event on 1st March, with the mighty Marcell Dettmann headlining! Full details here.
Posted by N.E. at 11:20 PM 3 comments:

Please excuse the slack mixing - he hasn't done a mix for years. It would've been longer, but the old bugger over-excerted himself and had to have a lie down.
Posted by N.E. at 11:27 AM 5 comments: 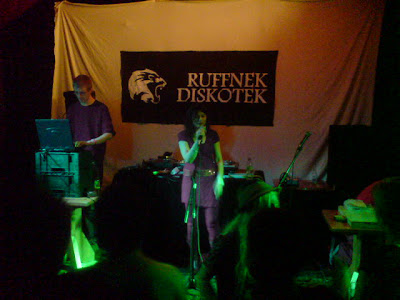 A star-studded extravaganza at Ruffnek Discotek last night. Bass Clef returned to his old adopted home for another of his unique one-man-band performances, showcasing some fresh tunes with the usual madcap trombone/theremin/percussion extemporising (nobody plays woodblock with as much soul as our Ralph). Unphased by some early technical difficulties, his invention and showmanship delighted all who witnessed it. I managed to grab a cd-r of fresh tunes from him, which included a couple of rather splendid remixes of Appleblim & Peverelist's "Circling". Both the "Diameter" and "Radius" mixes take the original into facinating new territory - I really hope Skull Disco see fit to release them!

Atki 2 reunited with vocalist Indi Kaur, whilst simultaneously his Monkey Steak partner Hanuman stepped in at the last minute to play in the bar next door. Atki and Indi's vibe was deeper and more cerebral (what was that crazy abstract shit they were playing at the end?!), but Hanuman won the soundclash with a cheeky selection of bassline booty-shakers - I've never seen the bar area at the Croft so animated with dancers! Bassline fucking House, eh? I never listen to the filthy stuff at home, but I can't get enough of it when I'm out partying, and I admit I was egging John on all the way.

Then it was back to the serious stuff when Kode 9 stepped-up to the deckles, for what turned-out to be a sensational 90-minute set. Let's not call it dubstep, though. This was truly hyperdub - a frenzied attack of beats, bass, jagged synth oscillations and Warrior Queen vocals of the kind I haven't witnessed since Plasticman/Plastician in his prime circa 2005. It reminded me why I got into this shit in the first place. Maverick genius in full-effect. And "Magnetic City" is still the dog's bollocks. Then afterwards he cadged a fag off me and we went for a cosy chat outside with Doppleganger. But by that point I was feeling my age (can you believe I had a fucking headache?!) and just couldn't face the final hour with Peverelist. But what the hell, I've seen him play out on many occasions. I know he was great, and you know he was great, right? Ditto Thinking.

Plenty of friendly faces in attendance, as one might expect for a line-up of this calibre, so big-up Appleblim, Headhunter, Kid Kut, Forsaken, Joker, Wedge, Gatekeeper, Henry, Richard Carnage (who I've been spending far too much time chatting with on pavements recently) and of course the Ruffnek regulars Dub Boy, Forensics, Beavis and Brother Wetlands for putting together another wicked event. Watch-out for the next one...look carefully in the pics below and you'll see a flyer revealing next month's line-up. I'm playing too, though obviously that's only exciting from my viewpoint. 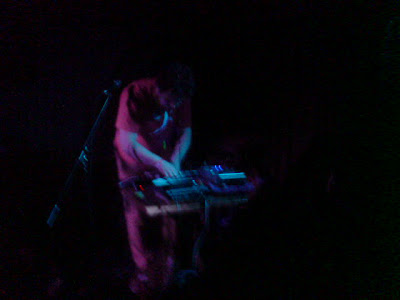 Bass Clef doing whatever the hell it is he does. 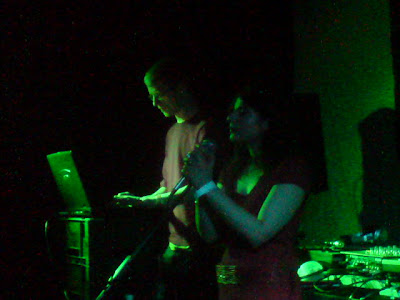 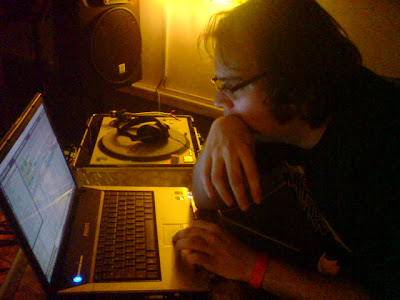 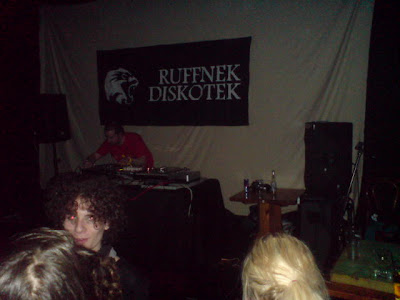 Kode 9 prefers doing it with the lights off 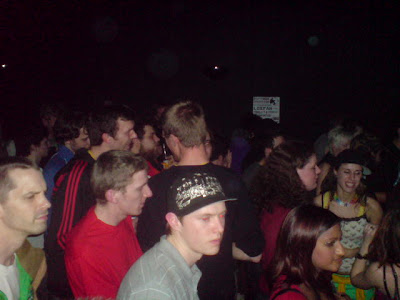 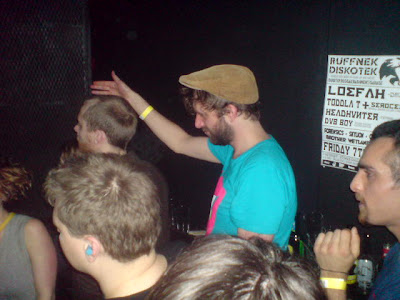 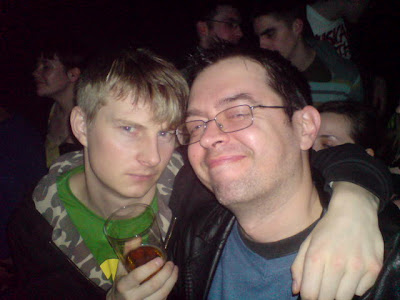 The now-familiar gratuitous shot of Gutter hanging with his cool friends - in this case Headhunter
Posted by N.E. at 9:03 PM 5 comments: 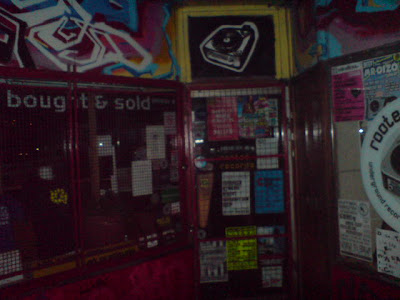 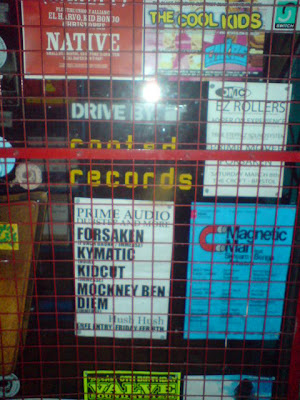 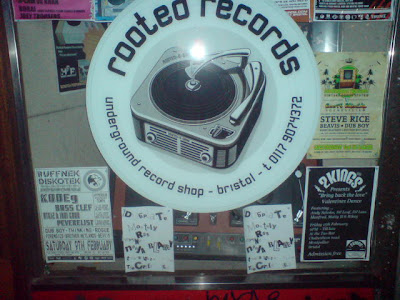 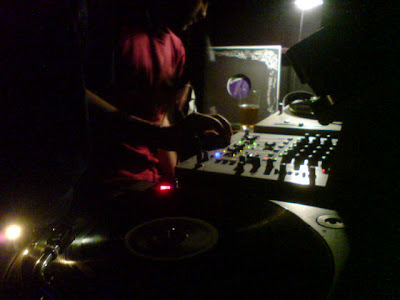 Totally crucial night down at the Tube last night, with the Netherlands' finest Dave Huismans delivering a clinically precise 2-hour set of perfectly measured technoid intensity without even breaking a sweat. Somewhere in the middle he morphed from his A Made Up Sound persona into the dubstep-affliated 2562, though it was impossible to spot the join. The beats got a bit faster but still pushing a sub-heavy 4/4 flava until near the end when he dropped a few more recognisably dubstep-orientated tunes from Mala, Compound One and his own bad self, of course. Amazing to see the whoops of excitement and recognition when he dropped Peverelist's "Infinity Is Now" - measured purley on audience reaction it was the biggest tune of the night. Indeed I got a really palpable sense from the people I spoke to that Bristolian civic pride is at an all-time high right now - people really feel that this city is actually leading the way. So maybe we're on the crest of a wave, but I'm glad we've got Mr. Huismans along for the ride, cos I had a fairly long conversation with him beforehand and he comes across as a very switched-on guy with a wide depth of knowledge, and a real gentleman too. His album is scheduled for release on Pinch's Tectonic imprint soon (along with the aformentioned Peverelist tune) and I reckon it's gonna tear shit up good and proper. 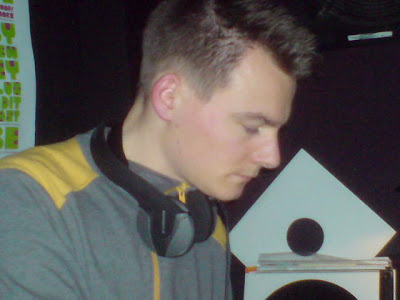 Deeply concentrated: Dave Huismans aka 2562
Respect also to the Under_score residents Jim Petherwick, Luke Malcher and Placid for their uniformly excellent selections as well. As usual I spent far too much time chatting and hanging around on the pavement outside smoking rather than staying purely focused on the music, but that's all part of the communal experience and half the enjoyment for me. Nice to meet up with Richard Carnage (of Tape infamy) again plus Duncan, and a surprise appearance from Komanasmuk, though no other familiar faces from the dubstep scene in attendance - probably all still recovering from the previous evening's Subloaded all-nighter. Also great to make some new acquaintances, including Paul from Emptyset, that bloke from Luton, the guy who's organised a headlining set from Gatekeeper this weekend, the other guy who's involved with a Bruk night on 15th Feb. and those lads who'd just turned 19, etc etc. Wicked, friendly vibes all night, the crowd was mad for it and the dancefloor was pretty much solid from midnight through till the end. How much of that was down to pills I don't know (maybe I look like a drug-dealer cos a couple of times I had people asking me if I had any). Was it a techno night or a dubstep night? On balance it was the former, but the lines never felt so blurred before. Note to self: attend more Under_Score nites!! 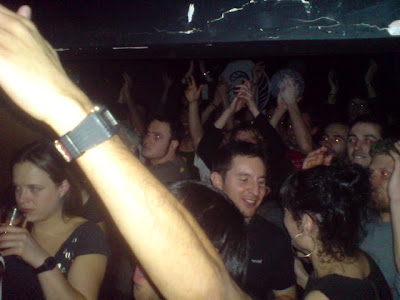 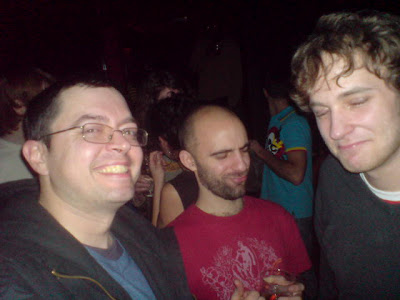