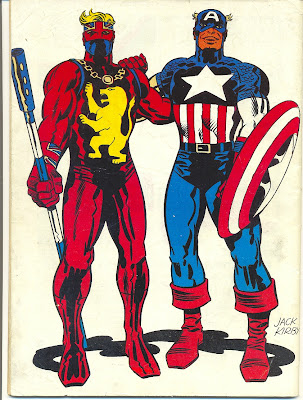 Another rare meeting of the two Captains, this one fancifully delineated by the late, great Jack 'King' Kirby. There they stand, shoulder to shoulder, those two proud and noble hereos of our respective nations. Sigh...takes me back to the times when you could feel proud of your Western origins and values. These days I feel fucking embarrassed. Never mind though, eh?

Incidently, this little masterpiece can be found on the back cover of the Captain Britain Summer Special 1980. It's printed on glossy paper. Don't you just wish you had an original copy too?

Helpful hint: This would make a great Xmas Present. So would this. That's Kirby's mid-70's run on Cap America collected up nicely. I used to have all the original comic books, natch. But then I sold them when I was really, really skint. A collection so carefully maintained in childhood plundered, betrayed and totally fucked-over by the grim necessities of adult life. Makes ya wanna spit, don't it? These would make a nice replacement. Add this, too. Thanks in advance...
Posted by N.E. at 11:59 PM 5 comments:

Holy living fuck! This is the Space Calculator, an ingenious cardboard device enabling children to instantly access useless information about the planets in our solar system. It was given away with issue #1 of Star Lord comic in 1978. Or was it issue #2? I'm not entirely sure, as I appear to have, er, mislaid my collection. Shame, 'cos I had the full set. It only lasted about a year, mind. Eventually, presumably due to poor sales, it was absorbed by 2000A.D. That was the common practice at IPC Magazines, wasn't it? They didn't just cancel a comic, they merged it with a more popular one, thus ensuring that the small loyal readership it had gained would continue to buy. The same thing happened to Tornado a couple of years later. Actually, now I think of it...Marvel UK did exactly the same thing - like when Captain Britain merged into Spider Man..as did Hulk Comic. And so on. Eventually, all that was left of British adventure weeklies was the bloated, omnipotent 2000A.D. and Spider Man Weekly, which for a brief period was known as Spider Man TV Comic, fact fans.

But to resume. Although the actual comics are lost, this Space Calculator has somehow remained in my possession for the past 28 years. Having lasted that long, I guess it'll have to stay with me for the rest of my natural life. I can hardly dispose of it now, can I? Oh well, best put it back in the old biscuit tin where I found it (lots of blogging potential in that biscuit tin, oh yes!).

But hang-on a sec'...why was Star Lord not as popular as 2000A.D.? I thought it was way better. It had nicer paper quality, for a start. And it had a least two sure-fire classic strips in the shape of Strontium Dog and Ro-Busters (no surprise that those two strips continued in Tharg's rag). Of course Ro-Busters introduced the character of Hammerstein, the ex-war droid, who would find greater fame years later when his earlier life was re-told in ABC Warriors. And I think he had a bit-part in the Judge Dredd Movie.

Star Lord was also the name of the fictitious editor of the comic (that's him top left in the picture below) and he was on some sort of mission to train the children of the UK to be battle-ready against the threat of imminent invasion from the deadly Interstellar Federation. He referred to his readers as 'Star Troopers', whilst that condescending alien bastard Tharg just called us all 'Earthlets', like we were some fucking juvenile lower lifeforms or summit. Maybe the whole concept was just too stupid, even for children of the post-Star Wars late '70s. But then, 2000 A.D.'s 'alien editor' and script/art/lettering droids (hello Kek) was hardly believable either, was it? Let's face it - the answer to 2000A.D's continued success is Judge Dredd. 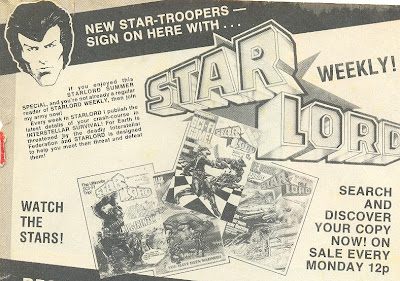