For anyone out there who still checks this blog, I'm back very briefly to bring your attention to the highly limited DVD documentary "Living Inside The Speaker", an excellent exploration of the burgeoning Dubstep scene here in Bristol, filmed earlier this year by Mike Madboy and Spermchaser. Featuring interviews with all the main players - Pinch, Blazey, Thinking, Headhunter,Peverlist and all the other souljahs who became such a big part of my life, and consequently woven into the fabric of this blog for many months. It's a well-paced, logically edited film interspersed with footage from the various clubs like Noir, Dubloaded and Ruffnek Discotek, with appearances by Skream, Chef, Distance and S&D, and a great soundtrack featuring several unreleased tunes by local producers like Whiteboi and Forsaken. Oh, and I'm in there too. It's a perfect summation of everything I experienced and wrote about over the past couple of years and I'm very pleased to be associated with it. There's also a bonus video for Pinch's "Qawwali V.I.P." with visuals by The Sex Pixels, featuring digitally distressed nocturnal scenes...like wandering through the streets of central Bristol late at night, passing landmarks like Rooted Records and Cosies, as Dubloaded flyposters loom out of the murky shadows. It's a bit obvious, but still very effective in evoking the feeling in the music. Available exclusively at Rooted Records, grab your copy now, or face an eternity of regret.

While I'm here, I really should mention a couple of other CDs that are available...

Anyone remember Bass Clef? I wrote a bit about him earlier this year, which helped to get him a record deal, culminating in the alarmingly great debut album "A Smile Is A Curve That Straightens Most Things". Ralph's distinctive take on bass-heavy electronica has been on heavy rotation at Gutterbreakz HQ, and I can't recommend it highly enough. I also got another chance to see him live when he performed at Cosies earlier this month, and it was sen-fucking-sational. If he ever comes to your town, don't miss the opportunity to witness Bass Clef in the flesh.

Finally, don't forget that The Tectonic Plates double CD is in stores now, collecting all those vinyl-only 10" releases from Pinch's Tectonic label, plus an extra mix CD featuing several exclusive new tunes. An essential summary of the label's impressive catalogue to date.

FYI:I don't have any plans to get back into regular blogging anytime soon, as I've recently become a father again for the third time and am currently busy getting to know my new son. There may be a few intermittent posts over the next few months, but don't hold your breath.
Posted by N.E. at 4:35 PM 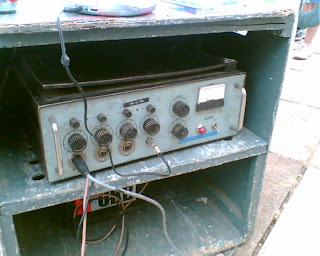 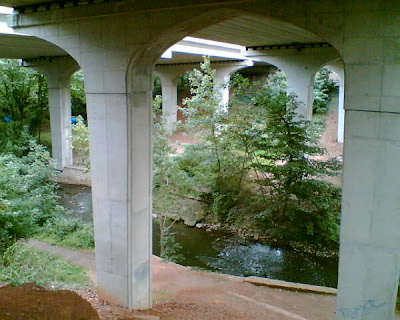 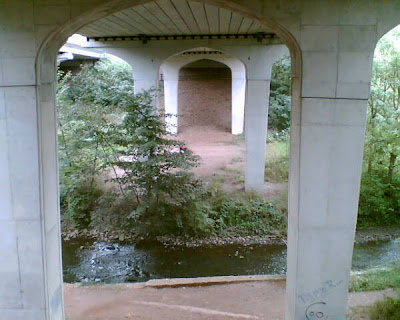 Note: This is actually at a different location from the previous flyover post, although it's still spanning the River Frome, just a mile or so upstream.

Why? Oh, I dunno. I just like it here, okay? Gives me something to post until I figure out what this blog's actually for...
Posted by N.E. at 11:52 PM No comments: 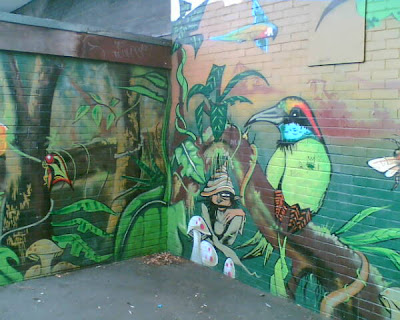 A noble attempt to brighten-up a particularly grim corner of Staple Hill. Yet what this image is unable to convey is the unmistakable stench of stale urine that hangs malignantly in the air.