Martin Rev's new solo CD "To Live" arrived on my doormatt this weekend. I'm still trying to come to terms with this mindfuck album. So much so that I'm still not quite ready compose a fitting description of it's contents, or explain my own personal reactions. So, as a prologue here's...

...some history. I guess most people with an interest in electronica & punk know at least some of the Suicide story, so I'll try and focus on a few key points and offer some fresh viewpoints. 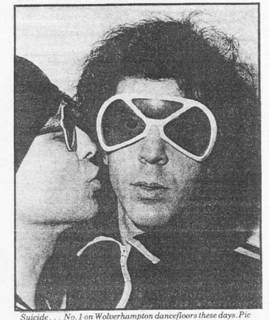 Suicide came into being sometime in 1971 when jazz keyboardist Martin Rev hooked up with avant-garde sculptor Alan Vega at the Project For Living Artists in New York City. Together they created a sound once described by David Fricke as "a joyless noise so relentlessly brutal in it's crude electronic throb, so abrasively savage in it's vocal primitivism, that it was widely assumed that some day - sooner or later - Rev and Vega would fall back into the gaping hole in pop sauce from where they'd crawled".

Luckily for us, that didn't happen. But for several years Suicide struggled to get gigs at all those legendary NYC venues like CBGB's and Max's Kansas City, living on their wits as Vega recalled "The years on the streets, man. Me and Rev used to go behind the local supermarkets at night looking for the bruised fruit they used to throw out. We'd find these bakeries on the west side of Greenwich Village; early in the morning they'd be baking bread. We'd walk by and they'd throw us free bread. That's how we lived for five years".

Jesus! Talk about suffering for your art!

Anyway, eventually the New York Dolls' manager took them into a studio and the resulting eponymous debut long-player was released in 1977. Predating all debut releases by UK post-punk electronic experimenters (except maybe TG) "Suicide" remains the foundation on which Rev and Vega's reputation stands, along with those intensely violent audience confrontations when they toured Europe in 1977/78.

Now I freely admit that I was too young to witness Suicide's original explosion onto the scene, but I can imagine it, thanks to people like Ian Tyson, a correspondent of mine, who (after much persuading from myself) was kind enough to write about his experience of witnessing Suicide when they supported the Clash in Glasgow in 1978. Over to you, Ian:

"No introduction. A bare stage. ( two piece synth bands did not
exist at this time, guitars drums, that was it!) A man (Martin Rev) walks on
and holds a note on the keyboard. The audience is still talking amongst
themselves unaware that half the band is already on stage and the
performance has started. The noise gets louder, a tape loop.. Repetitive
electronic noise.. Gets louder, the audience start to look at the stage.
Alan Vega walks on. He is wearing a glitter jacket, with one sleeve torn
off. Is this punk? He takes the microphone and screams. The noise echoes
round the theatre. He says something. Just a distorted echo. I remember
thinking.. "What the fuck is this!!!" It was clear his accent was American,
and he posed like the audience loved him. (at the time punk was a
particularly British thing, The Clash had a song called "I'm so bored with
the USA" ). So who was this American strutting around in a glitter jacket
sounding like Elvis, and where the hell was that loud distorted pounding
beat coming from! The audience looked in bewilderment for a few minutes
before deciding to start a slow handclap of disapproval. This is usually
the sign for a support band to finish off before things get worse. But
Suicide were only just on stage. Alan joined in with the handclap acting
like the audience were clapping along to the music. This stopped the hand
clapping but provoked the audience to shout abuse and hurl objects at the
stage. I did not see an axe, but I can quite believe the reports that this
happened would be true. I did see cans, bottles and even an attempt to
through the first row of (formerly fixed) seating onto the stage. The
Apollo Theatre had a notoriously high stage of about 10 feet so this was not
successful. I remember Allan poised on the edge of the stage on his knees
supported by one hand, the microphone in the other, looking down at the
audience like a hunting dog ready to attack. Alan picked up one of the cans
thrown at him and pretended to drink from it, giving a wave of thanks to the
person who sent it. I was completely confused. Punk was the most outrageous
thing to have happened in my lifetime, so what was this? A loud industrial
noise. Drum beats like disco music but psychotic. A singer who tolerates
this abuse and performs with such confidence and seems to think he is a star
like Elvis. I was open minded about music. Even in those days I was
listening to the avant garde, and had at least three Kraftwerk albums so was
not unfamiliar with electronic music (although I am sure this would not be
the case for most of the audience). I couldn't make out the words.. they
just echoed round the theatre.. He seemed to be screaming and taunting the
audience, but also speaking with affection and passion. A real emotional
explosion. And that could be said about the audience as well I suppose.
How could it be possible to create such a violent reaction so quickly with
just music. And then silence. I thought I saw blood on his face. Whether
it was the result of the missiles being thrown or self mutilation I don't
know. He seemed not to be bothered by it. He still acted like a showman.
The music stopped, he said something.I don't know what, but then calmly and
coolly he walked off. It seemed like the audience were suspended in silence
as they suddenly came to terms with the state of madness they were in. In
probably just 20 minutes they were taken from a state complacent acceptance
of a another support act, to complete anger, then suddenly nothing. As for
me, I didn't know if I hated the band or not. All I knew was that I had to
buy a record to try and make some sort of sense out of what I had just
witnessed. I bought the first and only Suicide album of the time, and here
I am still listening to it, and every other Suicide, Vega, Rev album that
followed to this day."

Now, when was the last time YOU witnessed a gig like that?

And YES, Suicide played in Sheffield and YES everyone who was anyone was there to witness it and absorb the influences. Check this quote (unfortunately I can't remember who wrote it, so my apologies to the author):

"I first saw Suicide perform in Sheffield (The Top Rank), England in
1977 supporting The Clash. The music was so new - no guitars, no
drummer - it was VERY shocking at the time; an event so thrilling,
you never forget... Cabaret Voltaire , The Human League, ABC, they
were all there, like myself, not to see the clash-city-rockers, but
to see Suicide, whose strange, scary album had been released in
America only months before they played here. They managed to play
for about 10 minutes under an ABSOLUTELY CONSTANT barrage of bottles
& phlegm - not unusual in those days, but certainly THE most
consistently spirited attack I've ever seen from an audience at
large."

So remember kids, next time you're headbanging to the latest Pan Sonic album (or whatever), Kraftwerk are only part of the equation. Suicide fought the Electro Wars so you could enjoy all this crazy shit today, and don't you ever forget that, mutherfucker.

After that initial period of madness, Suicide had mixed fortunes with the onset of the '80s. Their second album, produced by The Cars' Ric Ocasek, was a sleeker, cleaner interpretation of their sound; in some ways as radical as it's predecessor. In fact, when reviewing the album for the NME in June 1980, Andy Gill thought it was "incomparably better" than the first LP. Nevertheless, Suicide fell on hard times and, apart from the occasional gigs and 'comeback' albums, Vega and Rev went on to pursue very different solo careers, which I won't go into here, otherwise this post will go on for hours. Another time maybe.

Those solo careers continue to this day, happily co-existing with Suicide's occasional reformations. Last year Suicide released their fifth studio album "American Supreme" on Blast First and, as I can personally attest, were on top form for the accompanying tour. As with most Rev-related albums, "American Supreme" seemed determined not to repeat that winning formula that made Suicide so special in the first place. Like an electropunk Todd Rundgren, Rev seems to be always running away from his previous work, always trying to break new ground, always looking forward, never behind. An admirable attitude of course, and one that has brought some fascinating music, but I always felt that he had some unfinished business with his old style that needed to be confronted, and with "To Live", I think maybe he's done just that....
Posted by N.E. at 10:50 PM