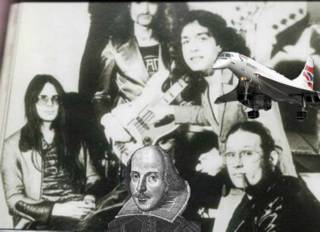 Got a nice e-mail from Dan yesterday:

When I woke up this morning I was thinking for some unknown reason about your post on Concorde a while ago, oh god nearly a year ago...

I was thinking of the meaning of the word concorde as I understand it - I had an old LP issue of Can's "Ege Bamyasi" and printed on the inner sleeve was a quote from Shakespeare about "concord of sweet sounds..."

Now I don't know if Can were opposing their product to the noise of the plane - I think the record was released in 72 so it's a possibility...maybe...

I was most gratified to think that a piece I wrote on Concorde back in October last year should still be providing stimulating thoughts for someone else now and, in turn, Dan's e-mail tickled my fancy to the point where further investigation seemed necessary.

Naturally, Concorde's name is derived from it's more well-known definition, meaning 'harmonious agreement', representing the spirit of co-operation between Britain and France that made the project possible (ironic then, that the two nations actually argued over the spelling of the name for some time - at one point, after Prime Minister Harold Macmillan felt slighted by President de Gaulle backing out of a scheduled meeting, Britain insisted on calling it Concord, only relenting to the Gaelic spelling some time later), but the word also appears to have a second music-related meaning (previously unknown to me) defined as "chord satisfactory to ear without other(s) to follow" or "Agreement or harmony between things; esp. said in reference to sounds and rhythmical movements, and in uses thence derived"

Along with Shakespeare, Dan came across several literary quotes relating to music:

1509 HAWES Past. Pleas. XVI. xiv, The vii. scyences in one monacorde, Eche upon other do full well depende, Musyke hath them so set in concorde.

1596 SHAKES. Merch. V. v. i. 84 The man that hath no musicke in himselfe, Nor is not moued with concord of sweet sounds.

1744 J. PATERSON Comm. Milton's P.L. 171 If two stringed instruments be exactly tuned alike, the one that is not play'd on, will answer to that which is playd on, in perfect concord.

1849 M. SOMERVILLE Connex. Phys. Sc. xvii. 158 When their vibrations are so related as to have a common period, after a few oscillations they produce concord.

Although it's obviously incidental, I find it a delicious irony that the world's most notorious noise-polluter should have a name that represents perfect musical harmony. The secret of Concorde's distinctive 'sound' is due to hot gases leaving the engine's exhaust system and hitting the surrounding air, creating turbulent eddies, which can reach twice the speed of sound. The eddies act like a stream of Mach 2 bullets, each creating shock waves - and sonic booms - as they twist and turn back from the engine. These shock waves are the strongest source of noise for exhausts like these. Although I would hesitate to claim that the resultant deafening roar is music, I would certainly say that it excites me in a similar way to good music played at high volume. The way it seems to slice through the very fabric of reality, overpowering the senses, is (was) an intoxicating experience, proving - to me at least - that Noise can produce vibrant, ecstatic emotions and hence validating it's potential as a rich source of exploration in the field of conventional music composition. Which brings me full-circle to Non, Whitehouse, Pan Sonic etc etc... 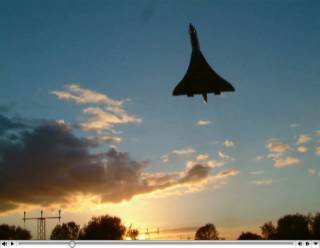