Over the last few years, with affordable cd-r burning and high speed MP3 downloads becoming the norm around here, I'd almost forgotten that I had a cassette collection. It's huge! There's piles of the fucking things lying around in boxes and cupboards, just collecting dust. There was a time when cassettes were the life's blood of the hard-up music obsessive who's earnings could never match his voracious appetite for fresh sounds, and I'm sure there are many people out there who still have much affection for those home-made compilations their girlfriends and buddies made for them or those inspired mix-tapes they cobbled together on a wet afternoon in 1992.

So anyway, I was thinking what to do with them. Keep 'em, and just let them lie there taking up space? Can't sell them - they have no monetary value. Which means - gulp! - throw them away?! Yeah, I'm actually considering chucking the bloody things out. About 50% is probably stuff I'll never listen to again (Bronski Beat's "Age Of Consent"? The Cure's "Disintegration"? Gary Clail live broadcast?!!,) and the rest can probably be obtained in nice shiny digital format on Soulseek if the urge to hear them should return.

But before I jettison this portion of my music collection, I've decided to spend the next few weeks just listening through them, hoping to find forgotten thrills, sorting the wheat from the chaff, maybe relenting on the Stalinist Purge vibe and keeping some of them. I'll also be reminiscing about a few favourites here at the blog - so consider this to be Part 1 of an ongoing, occasional series.

One thing I've noticed is the surprising amount of off-the-shelf pre-recorded cassettes I own. Makes me realise that, even before I started buying CDs, I was never a vinyl purist. I've always been into convenience, so I guess that was my motivation for buying albums in cassette format. Easily played on stereo, walkman or in the car without any fuss. Come to think of it, cassette compilations played a vital part in my musical education. Take this one, for instance: 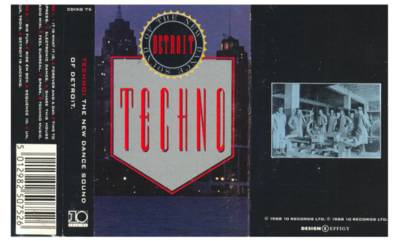 TECHNO: The New Dance Sound Of Detroit
No doubt all the hipsters will claim that they bought all the originals on 12inch import long before it came out, but this 1988 cassette comp. from 10 Records was my first exposure to Detroit Techno. Listening back now, some of it sounds a bit average, particularly the Blake Baxter tracks like "Ride 'em Boy" which is almost moronic, although when he gives over the vocals to the serenely disengaged Mia Hesterley on "Spark", it elevates the vibe ten-fold. I think she also did the vocals on that other weird Baxter tune "When We Used To Play" which appeared on the "Retro Techno" album later on. There's some solid tracks from Eddie "Flashin'" Fowkes, Anthony Shakir and Tongue & Groove (who I know almost nothing about), but there's too many examples of gimmicky stutter-vocals and 'mega-mix' effects which makes me suspect there was an attempt to cash-in on the House music explosion. Even Model 500's "Techno Music" is mired by some daft speak'n'spell robot voice nonsense, which is thankfully absent on the version on R&S's "Model 500 - Classics" anthology. At least "It Is What It Is", the peerless opening track by Derrick May's Rythim Is Rythim, is unblemished by such cynical maneuvers, although compiler Neil Rushton credits Derrick as 'Detroit Co-Ordinator', so I guess he approved everything. The man had bills to pay, I guess.

But whatever my gripes now, I remember this as a special release at the time. Maybe much of it isn't as 'timeless' as I would've liked to think, but as a symbol of change and gateway to future pleasures, it ranks as one of the greats. I think I'll be keeping this one for a while yet...
Posted by N.E. at 11:33 PM