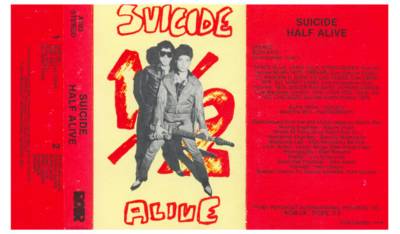 Although Suicide's eponymous debut album is generally considered the essential item, I must admit that, when it comes to 'Desert Island Discs', then "Half Alive" would probably be the one I'd choose. In both concept and appearance it has a distinct bootleg vibe; the selection of live tracks and home demos has the feeling of a homemade compilation, whilst the basic typeface and slapdash hand-drawn cover lettering suggest it was knocked out in five minutes by some enterprising bootlegger. In fact, this is a very official release from Reachout International Records Inc. (ROIR) that employed Martin Rev's reprocessing skills to get the tapes into shape. I think I actually bought it in HMV. Strictly budget cassette release though, as the small print states: "Warning: This material not available on vinyl"

Here we have the first ever examples of the incredibly dense, claustrophobic music recorded during the '75 rehearsals ("Space Blue", "Long Talk", "Speed Queen"), an earlier, more solemn and utterly devastating studio version of "Dream Baby Dream" (renamed "Dreams" for copyright reasons?) and three demo's from 1979 that would later be reworked(with the help of Ric Ocasek) into sleek, futuristic, multi-layered electropop on the Second album. But I prefer the demo versions. "Cool As Ice" (which became "Touch Me") is just fantastic - Rev's grinding, monotonous organ riff and pounding rhythm machine proves that it's possible for One Man to sound better than the Velvet Underground. Likewise, "Love You" (aka "Sweet Heart") and "Chezazze" provide a frustrating glimpse of what the second album might've sounded like if they'd kept to the original basic set-up of Farfisa/drum machine/vocals.

The live tracks are all killer too. The Marquee track "Sister Ray Says" is a lesson in repetitious delirium that we can all still learn from - the bit near the end where Rev suddenly cranks up the volume mirroring John Cale's similarly violent organ work on the song that this track is a homage to. And let's not forget Vega at his absolute best on "All Night Long" from Toronto in '78 - part blustering egomaniacal crowd-baiter, part trembling emotional wreck - my god, the sheer fucking charisma of the man makes even the brightest new 'Pop Idols' look like a bunch of vacant wet blankets by comparison. It hits me in the head. It hits me in the heart. It kicks my ass. I'm filling-up just at the thought of it.

"Half Alive" has since been re-issued on CD with extra tracks. I have that too, natch. But the original cassette remains a personal treasure of such talismanic power that I used to carry it around with me, drawing strength from it's close proximity. I could handle anything life threw at me with this baby by my side. 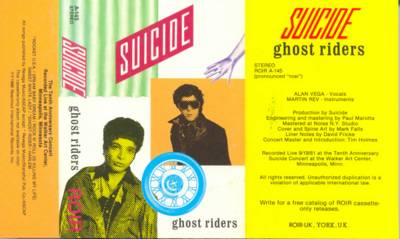 This is a recording of Suicide's Tenth Anniversary Concert at The Walker Arts Centre in Minneapolis on 19th Sept. 1981. Again there's a cheap, artless feel to the inlay graphics that belies the important documentary evidence contained within. There's a nakedness about this performance; bereft of the echo effects and other mixing desk tricks that usually come with the Suicide package, this is the nearest thing to Rev & Vega Unplugged you're likely to hear. Of course, the electricity is very much turned on, as Rev's harsh Farfisa-boogie testifies, but there's a clarity about this recording that highlights the abilities of the men, rather than focusing on the technological roar that usually envelopes them. I wouldn't say it was my favourite concert recording of theirs, but it certainly has a distinct charm of it's own. Vega's anguished shrieks on "Harlem" - usually echo-plexed into infinity - are startlingly near-focus. At one point he sounds genuinely demented, almost choking on his own bile as a series of insane whoops, yelps and gurgles spew out of him; Vega's vocal chords seemingly a vessel to emote the pain and suffering of all the down-trodden inhabitants of the New York district of the song's title. This is art on the absolute edge of panic. How he managed to wrench this stuff out of his guts on a regular basis defies rational explanation. I mean, I couldn't do it once. Like many people, I have an inbuilt safety valve that cuts in when things get too extreme - I just sort of shut down. Yet Vega could turn on the horrors like a fucking tap. Although he's still a great performer to this day, sadly I don't hear that level of intensity in him anymore. Maybe it's because he's accepted now. That's why the much-publicised hostility of the early audiences was so crucial to what made Suicide tick (and maybe it's also about New York City, their home in life and spirit, which is a very different place now). But as David Fricke notes on the inlay, "All that energy, frustration and indestructible pride comes blasting through on this recording". Amen to that.
Posted by N.E. at 11:49 PM