For a little while I attended Wanking School in the house of one of the lads called Rex Barrow. We would gather in a circle and extract our organs. Barrow himself had a prodigious cock and was very proud of it. We would all watch nervously while he got going. Even at the slack his member was daunting. But as he began to recite the names of local girls and rock back and forth to our accompanying groans, the miracle took place before our eyes.

'Rosie Ball, Rosie Ball', Rex would mutter hoarsely, for libido and hoarseness always go together. 'Rosie Ball', and as we all groaned his snake flickered into life. 'Evelyn Coffee', said somebody else to a new groan of approval and Rex's prick filled out further, mesmerizing those of us whose tackle remained inert.

'Bertha Moonan?' I suggested, desperate to kindle the flames further. There was a howl of anger as Rex's dick died.

The above extract is just one of many highlights from possibly my favourite autobiography ever: 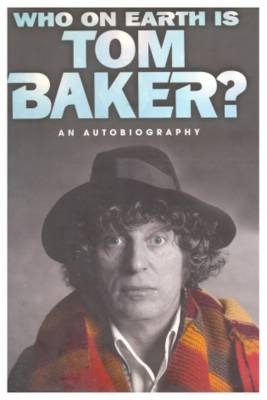 Who On Earth Is Tom Baker? (Harper Collins Hardback Edition, 1997)

I've been on a Tom Baker tip all day, after seeing him interviewed this morning on the otherwise dull-as-ditchwater "Heaven & Earth" show on the telly. With some gentle prodding, Baker discussed several themes from his fascinating past, including his time as a monk, his disastrous first marriage and attempted suicide. I was inspired to start rereading the autobiog yet again. It's a real page-turner. Then tonight his wonderful voice was heard again, as the narrator of "Little Britain", at which point I realised I must share my love of the great man with the rest of the world.

Baker wrote another book too, a humorous fiction called "The Boy Who Kicked Pigs". I have a signed copy: 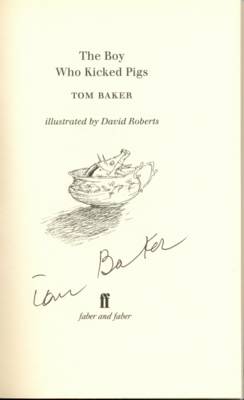 Okay, I didn't actually get it signed by him myself. My mother-in-law, of all people, heard he was doing a book-signing in Belfast (yes it's true, my wife's an Irish lass) and went along to get a copy so she could send it over to me, 'cause she thinks I'm such a bloody great son-in-law. If only she knew the real me...

The nearest I ever got to the mighty one was this: 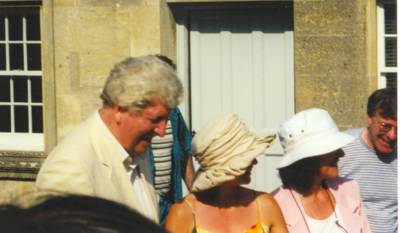 I took this shot at Longleat a few years ago. Tom is seen here with ex-companions Sophie "Ace" Aldred and Liz "Sarah Jane Smith" Sladen at some ceremony to celebrate K-9's 20th Birthday. I did get to have a chat with the girls (who were both lovely) and also Producer John Nathan-Turner, who I personally thought was the ruination of the series, although I didn't tell him that. I couldn't be arsed to wait in the massive queue to meet Mr. Baker - I'm not that big a fan fer chrissakes.

It seems slightly academic to point out that Tom was the greatest Doctor by a mile. You all knew that already.
Posted by N.E. at 10:11 PM