MUSIC HAS THE RIGHT TO BE HEARD

Unreleased demos & live performances. Alternate mixes. Abandoned recording sessions. Promos that never made it to full release. There's always been a healthy market for the stuff that, for one reason or another, the artist or label has seen fit not to release. The hunger for more work by a favourite artist, when all official product has been consumed and digested, is not uncommon amongst serious music obsessives, like myself. And so, for many years now, the bootleggers have done a roaring trade. Illegal, yes - but let's make a quick distinction here. We're not talking about pirate copies of officially released material that robs the Industry of millions of pounds every year, but those enterprising individuals who plug the gap between what the Industry chooses for the consumer to hear and what the consumer wants (and in some cases needs) to hear.

The standard of bootleg products can vary wildy, from immaculately packaged vinyl pressings and lovingly compiled CDs to dodgy Xeroxed sleeves with poor audio quality or questionable authenticity. Back in the days when I regularly frequented Record Fairs, I often found myself invariably drawn to the shady character with a stall full of cassette bootlegs - row upon row of gaudy, primary colour spines beckoning me with their artless, punkoid Xeroxed inlays, amateurish typewriter track listings (if you were lucky) and the music recorded onto domestic C90's. A few personal favourites: 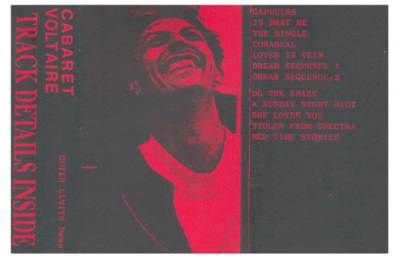 Cabaret Voltaire - Outer Limits Demo
Back in the days before Mute excavated the Cabs' early back catalogue and looong before "The Attic Tapes", this was the sort of thing us chronically addicted Cabbaholics coveted. This one features early demos recorded at Chris Watson's loft, most of which have since made it onto CD. Notice that although the music dates from the mid '70s, whoever 'designed' the inlay choose a jocular pic of Mal that clearly comes from the '80s, completely inappropriate for the vibe, illustrating the 'anything'll do' aesthetic. 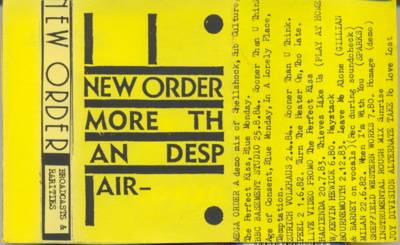 New Order - More Than Despair (Broadcasts & Rarities)
Yeah, okay, I was a big New Order fan back in the '80s, and this is one of the best bootlegs of theirs I ever found. A nice combination of demo mixes, BBC sessions, live tracks and a demo from their first post-Joy Division recording session at the Cabs' "Western Works" studio. The tape finishes with an early version of Joy Division's "No Love Lost", from the abandoned album sessions recorded with Richard Searling in Spring 1978. Interestingly, although the band were horrified when synths were overdubbed onto their songs (ironic, no?), I think the added electronic throb sounds wicked. 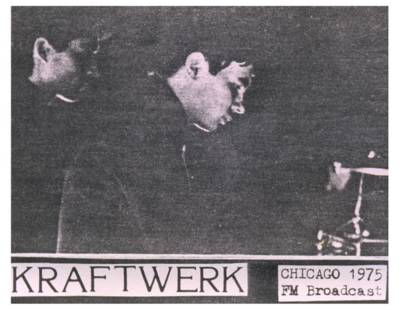 Kraftwerk - Chicago 1975 FM Broadcast
After "Autobahn"'s surprise success in the States, Kraftwerk undertook an extensive tour, from which this Chicago gig originates. They performed a full-length "Autobahn", along with "Comet Melody 1 & 2" plus a re-arranged "Rukzak", the opening track from their eponymous first album. To be honest, Kraftwerk sound knackered here - the tracks all seem to be at least 10 bpm slower than the studio versions. But it's still a fascinating display of early live electropop, with all the technical problems that they must've had to be overcome to replicate the studio sound. I mean, would you trust a Minimoog to stay in tune for the whole duration of a gig? A document of true pioneering spirit and bravery.

So bootlegs can be great, even when they're shoddy. But traditionally, someone is always making a profit out of other people's intellectual property. Now, with the advent of P2P filesharing on the net, these people are probably going to go out of business. Why? Because of the international network of knowledge that's housed on the harddrives of thousands of filesharers across the globe. Because filesharing has nothing to do with money. The middlemen have been cut out. Once these recordings get into the system, they spread like a virus, from user to user, each filesharer offering his treasures for free on the speculative assumption that he might (and almost always will) get something free in return. A simple bartering system - 'I'll show you mine if you show me yours'. I often leave my PC running overnight. Who knows how many files get copied from my shared folder during that time? Who cares? I have a moral code, of sorts. I never share stuff that's freely available to buy elsewhere, only deleted items and associated rarities. I am a bootlegger. But I don't do it for personal gain, only to bring joy and satisfaction to others and to keep that music which I cherish alive, because music's no use to anyone if you can't listen to it. If the artist or label are unwilling or unable to make their recordings available to the public, then we will do it for them.

Richard D. James aka The Aphex Twin is a classic case in point. Although he often brags in interview about all the unreleased material he's sitting on, his unwillingness to make it available is bizarre and, quite frankly, mean-spirited. He's built up a strong fanbase over the years and yet seems to have little or no concern for the interests of those who adore him. His output in recent years has been slender to say the least and when he does release some product, it's often unsatisfactory. The last new thing I think was the remix of the Bug's "Run The Place Red", accompanied by two almost unlistenable experimental pieces, which simply wasn't thirst-quenching enough after such a long drought. And as my good friend Robster recently stated:

"The earlier, more serious work is my preference without the enforced oddness that seems to pepper his latter stuff"

Yes, totally. James seems to be playing a game that we the fans don't understand the rules of. Which is why it's so important to get access to the great music that he almost released. The most recent I've discovered is "Analogue Bubblebath Vol. 5". Although the link shows that a cd-r exists, the MP3s I've acquired appear to come from the vinyl pressing, via several generations of cassette dubbing. The sound quality is therefore rather muddy, with the first track beset by waves of undulating high-end inconsistency, as though the music has been swept through an equaliser, although this is almost certainly due to the poor state of the cassette from which the track was digitally encoded. Yet even in this degraded state, the music's beauty is undiminished: deliciously naive, contemplative melodies dancing across irresistibly efficient electronic rhythm tracks; like the pastoral visions of mid-70's Cluster relocated to the mid-90's.

Then of course there's "Melodies From Mars", the projected follow-up to "I Care Because You Do" that was scrapped and subsequently replaced by the "Richard D. James" album. I've been living with MP3s of this one for a while now. Some of it's incredibly odd, especially the opening track with it's childlike, 'sequencer-for-beginners' beats and ultra-cheesy melodic figures. One track survived for the RDJ album, namely the immaculately composed "Fingerbib", which might give some idea of the vibe on this album's strongest pieces - playful, lighthearted arrangements which still exert a strong emotional pull; a vital snapshot of where James' muse might have gone if he hadn't discovered drill 'n' bass.

Another increasingly reticent act are Boards Of Canada. In the six or seven years that they've been in the public eye, the Boards have released a comparatively slender catalogue of work. Factor in the almost mythological status of their early private releases and you've got a classic recipe for bootleg frenzy. Having apparently been working on music continuously for many years prior to unleashing their epochal "Music has The Right To Children" album, BoC have amassed a huge amount of material. Whilst rumours of a box-set of early works still remains unconfirmed, the fans have been busily sharing the few documents that have come to light. The most well-known being "BoC Maxima", which appears to be an early draft of MHTRTC with various substitute tracks. Some fans reckon it would've made a superior official debut. Opening with the now familiar "Wildlife Analysis", it then segues into a truncated version of "Chinook", which has only ever appeared officially as the b-side of the "Aquarius" 7inch. 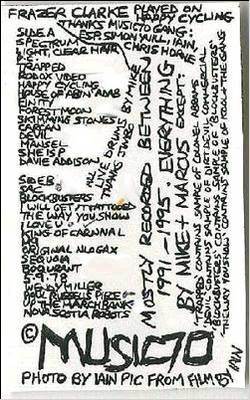 A Few Old Tunes - handwritten cassette inlay
Perhaps more even more interesting is "A Few Old Tunes". There are two volumes of these, apparently originating from cassette compilations that BoC made for friends and/or family. Somewhere along the line, someone in their inner circle must've betrayed them, 'cos a couple of years ago they started appearing on the P2P networks and have since spread like wildfire. There has been much speculation over the authenticity of these tapes, though 'Vol.1's credentials are now probably beyond dispute. Although there are several throw-away doodles, such as "Light, Clear Hair" which is a loop of some women talking about shoes and hosiery on TV, followed by some porno film grunting, there are some real beauties on here that, if I had one, I would stake my reputation on being by BoC. Opener "Spectrum" uses a rhythm that would later be used on the track "Twoism" but features a different, gloriously uplifting melody that take a certain unique talent to achieve. "Forest Moon" is over six minutes of heart-rending beauty and it amazes me that BoC have never seen fit to release it properly. Another familiar track is "I Love You", an exceptionaly evocative piece that uses samples of a young girl from Sesame Street trying to spell those 'three little words', which was subsequently renamed "The Colour Of The Fire" and included on "MHTRTC".

Volume 2 features 36 tracks, most of which are very short sketches or possibly fragments of longer works. Some of the files claiming to be Vol.2 are actually composites of Vol.1 and the real Vol.2, so if you're ever hunting for them on Soulseek, take care that you find the proper one. There's enough clues here for me to be satisfied of it's authenticity, but even if this isn't the work of BoC, it's still a beautiful collection and the forger should be applauded for his talent.

Whilst these are examples of my own personal obsessions, you can rest assured that, if an artist or group has a fan base, then their 'unavailable' output is busily speeding down phone lines across the globe right now. This is the real gift of filesharing. - millions of music lovers need never go hungry again. We're an international self-help group and we're doing it for love and for the music and pleasure it brings. But let's use the system wisely, people. If the music's available through official channels, get your credit card out....
Posted by N.E. at 12:15 AM