Continuing with what is rapidly turning into 'mid-80's' week here at Gutterbreakz, and with reference to Uncarved's recent post on 'The lamentable condition of charity shops' , here's a little something I picked-up on a recent charity shop trawl: 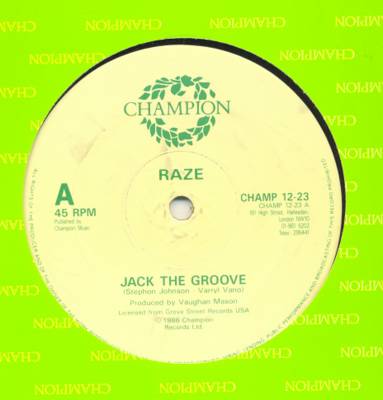 There's still plenty of fun to be had in Charity Shop land, it just depends how high you raise the bar of expectation. I've never been into that whole 'shopping for profit' trip. This one cost me 99p and that's probably all it's worth. It's not an import - just the standard UK issue, licensed through Champion Records. For me, it's just about finding some cool old skool relics...either new discoveries or nostalgic reminders of days gone by. I've never been concerned with labels, catalogue numbers, 1st or 2nd pressings etc. I would consider Woebot to be a Record Collector. I'm just a Music Collector. The format is of secondary importance - which is probably why I've taken to MP3 collecting so easily. For ease of access and storage it's an unbeatable format! This attitude goes back to my childhood comic-book collecting days, when I was perfectly happy to buy UK reprints if there were no US originals around (which is why my last post was in black & white!).

So, onto "Jack The Groove"...this is one of those tunes that I'd completely forgotten existed.
I think it was Farley 'Jackmaster' Funk's "Love Can't Turn Around" which was the first Chicago House tune to chart in the UK, in August 1986. But, brilliant though it was, it was essentially a vocal 'song-based' high-production track with a thumping House beat under it. I think that "Jack The Groove" was possibly the first proper 'Jack Track' to chart over here, just sneaking in at #57 in November 1986. But it would appear that January 1987 was when the 'Jacking' virus really went overground in the UK, as it re-entered the charts on the 3rd, peaking at #20. This was quickly followed by Steve 'Silk' Hurley hitting the #1 spot with "Jack Your Body".

"Jack The Groove" is seriously fucking brutal. Not in an aggressive sense, more in it's basic, almost amateurish production values. The main 808 backbeat features an incredibly stiff snare pattern - the nearest comparison would be with LFO's "Track 4" from four years later. The busy latin percussion loops alleviate the monotony slightly, but you still can't escape the overpowering regularity of that stinging snare! Then there's that crudely effective 2-bar bassline - christ, you just don't hear b-lines like that anymore! The hand-played vocal sample is about a million light years behind Mantronik's production levels. Brilliant skittering handclap fills tho' - with just the right amount of echo. I really fucking rate this tune - like all the best early Chicago tracks, it sounds great despite and possibly because of it's primitive hand-made aesthetics.

I love the whole idea of 'Jack Trax'. I was pleased to see at least two examples of the word 'Jack' being used in song titles this year - DJ Hell's "Let No Man Jack" and Detroit Grand Pubahs' " Nurse Hurse Jack Move". Time for the big revival. Although it was undoubtedly a phrase cynically concocted by Pete Waterman to appeal to 'the kids', I'd still rather Jack than (listen to) Fleetwood Mac. It's got nothing to do with musical prowess, it's simply a matter of affirming one's Cultural Identity, which - the more I think about it - is what this blog is all about...
Posted by N.E. at 11:58 PM