DOWN WITH THE SCHEME

Of all the places for Autechre to lay their seed of influence, who would of thought that Miami would be one of the most fertile eggs of creativity?

I associate Miami with sun, sand, Gloria Estafan and the 2 Live Crew. But then, I've never actually been there (unless you count that time hanging around for an hour at the airport waiting for a connecting flight to St. Lucia). Yet it's a place that has spewed-out some of the most twisted, oblique extemporations of the "Tri Repetae++" blueprint, and central to all this activity is the Schematic label.

This track is from "Expect More From A Past Life", the label's first CD album (I think!) back in 2000. I know very little about this artist, but here's his profile at Schematic's site. Specialising in densely-packed clicky rhythm-patterns that always manage to sit just on the right side of groovy, but occasionally sinking into a deep reverie of melodic melancholy, as on this one, which I find particularly satisfying.

First came across the work of Edgar Farinas on the "Day In The Life" EP released appropriately enough on Autechre's Skam label back in 1999. More Hip Hop flava to the beats, combined with some spine-tinglingly evocative arrangements, that occasionally verge on 'haunting'. A bit like Boards Of Canada, only not quite as good. I really love those beats, mind. This track comes from the "Dirty Dozen" album, again from 2000. The sort of tune I play on the iPod late at night, sitting in the garden, staring at the stars, supping on a can of Stella and puffing my way through a pack of Lambert & Butlers. Bit too chilly tonight, though.

Schematic's catalogue has been available at Bleep for quite a while now, so it's easier than ever to sift through their output. To be honest, I find a lot of it hard-going. Maybe I'm not as hardcore as I make out! I can take any amount of queer sound-bending, but I like a good groove going on underneath. One should never lose tha phonk, no matter how glitchy-twitchy-abstract-shitty things get. Seen?

One recent album that's really up my street is 09's "Church Of The Ghetto P.C." Described at the site as "a kind of graffiti action-script dedicated to all the industrial back-alley disjecta of our Bill Gates-induced modernity", this is a sprawling urban epic that flows through many moods, from chystalline slivers of juicy electro to icey slabs of sustained atmospherics. Like Mark One in the UK or Jimmy Edgar in Detroit, 09 is creating an audio reference map of his environment, the way he sees and feels it. A great record, although I would hesitate to claim it's as "important as the fucking Bible". But maybe time will tell... 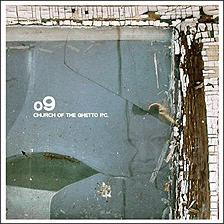 Currently my top tune on the album, a breathtakingly seductive blend of watery beats and bleepy staccato synth patterns. This may be beaming-in from another continent, but I bet it'll hit the spot for Psychbloke if he plays it on his new iPod next time he's wondering around Stokes Croft....