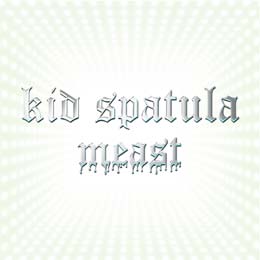 I thought I'd kick-off this little run of Planet Mu reviews with an album from the main man Mike Paradinas himself, here working under his Kid Spatula alter-ego. Although released this year, "Meast" isn't actually new material, it's a two-disc collection of DAT-detritus culled from the period 1994-98. Why get excited by that old stuff? 'Cos it's lush! Like most of the early Mu-ziq albums, this simply doesn't have a sell-by date. The Rephlex debut Tango 'N Vectif didn't sound like the music of 1994 anymore than it does 2004 - it existed in a chronological bubble that seemed oblivious to styles and trends and was therefore preserved in a perpetual state of 'freshness'. I don't consider Paradinas' strongest output to be Dance music, or even electronica - it's more like some beautifully mutated alternative form of synthesized Pop, where '70s children's TV themes influenced the development of the Top 40. C'mon, there's definitely something a bit Noah & Nelly about Paradinas tunes, isn't there?

Part of his enduring charm must come from the methodology; Paradinas at his best works with a palette of Midi-synth presets in conjunction with Cubase, a mixer and some outboard FX, to the extent that he actually switched Richard James on to the creative possibilities of presets (although James never managed to bend them to his own will as masterfully as Paradinas). Even in this age of plug'n'play Grime soundtracks, nobody works a preset as hard as Mike P. It was only when he started messing with drill'n'bass and sampling that Mike started to sound like he was in the same decade as everyone else.

Thankfully, the majority of tracks on "Meast" are more preset-based, allowing Paradinas to focus on melodic invention rather than hours spent editing breakbeats. And what an ear for melody he has! There's always that faint wiff of cheese, but not some mild, tasteless chedder. These tracks have aged like a raunchy, full-bodied lump of Stilton - the sort of thing that'll jazz your tastebuds and probably make you have weird dreams later on. When the breakbeats do surface, on tracks like "Jackel", they're kept firmly in their place, acting as rhythmic anchors for Paradinas' uplifting melodic flights of fancy. Imagine if, when you pushed the 'rhythm on' button on one of those home-keyboards, instead of some poxy waltz-rock beat you got a sped-up James Brown loop to play against - that's the sort of mentality. Elsewhere, Mike gives us creepy introspection on "Mocaseg", proto-bollywood-dubstep ("Carrier"), Aphex-like orchestral scores ("Squirms") and impossibly lovely, wistful tune-fests like "Buttress".

That Paradinas was able to dredge thirty-four unreleased pieces of music from his vaults and assemble them into such a satisfying, life-affirming collection is testament to his unique vision. A Meaty fEAST, indeed - vacuum-sealed for maximum freshness!
Posted by N.E. at 7:06 AM