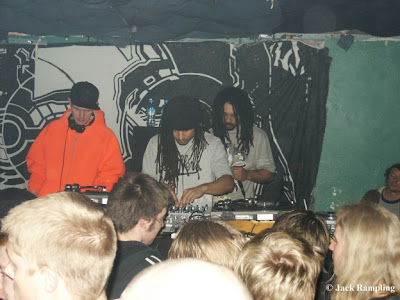 It had been carefully planned for months, but for the first couple of hours at Subloaded IV, there was a palpable feeling that it might become the biggest anticlimax of the year, sabotaged by the hateful sound-limiters installed at the insistence of the dreaded Environmental Health Officers. The Black Swan hosts extremely loud events on a regular basis, but, probably due to the unbelievable decibels generated by Subloaded II last year, it seems that this particular event has been marked out for special attention by the Powers That Be. The bastards want to kill our sound. And for Headhunter's set at least, that's exactly what they did. Anytime the soundsystem went beyond a certain level, the limiter (an evil little box at the back of the main room) would kick-in and squash the beats flat. Plus the microphones didn't appear to be working, which meant that J@kes and Scorpio were unable to host what remained of Headhunter's music. The 45 minute H.E.N.C.H showcase was utterly annihilated. It was so frustrating. As I mingled in the crowd (where you could easily talk without even having to raise your voice) the general feeling was of despondency and dismay. The limiters had reduced the impact of Subloaded III last November as well, but nowhere near as badly as this. Rumours started floating around that the engineer was gonna try and disconnected the wretched thing. We waited and prayed for a miracle. Things hadn't improved much by the time Blazey and Pinch stepped up to the decks. With the mics still out of action, Blazey gamely played on with a choice selection of grime instrumentals whilst his MCs stood impotently by his side. But I know what this music's supposed to sound like, and I could hardly bare to witness it in this neutered state, so I went for a wander, chatted with Vex'd in the bar, recorded my interview for Madboy's Dubstep documentary in the yard outside, and tried to at least enjoy the socialising. 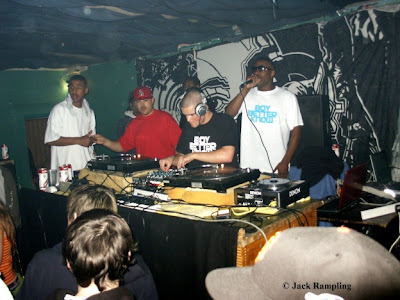 
I returned to the main room sometime after midnight to find that The Plastician was already on stage, with a noticeably improved sound, although still nowhere near what it should've been. The beats were hot and Skepta made a surprise appearance on the mic (functioning at last!) but, unbelievably, I just couldn't feel much enthusiasm for it all. That was perhaps partly due to the lack of volume, but also the lack of new Plastician material (the only one of his I noticed was the "Cha VIP"). It seems like ages since he released a record. The last I heard, his album was supposed to be released at the end of last year, but that seems to have disappeared off the agenda. It looks like he's focusing on his djing more these days, but I wanna hear some of his new productions! Admittedly, any set that includes Wiley, Slew Dem and DMZ beats is worth hearing, but I was hungry for some new shit. I wasn't even massively impressed with Skepta's performance, to be honest. He did a few of his customary "go on then, go on then" scats and kept bigging up the "alcoholic massif", but just seemed like he was going through the motions. Or maybe it was just me - my perception tainted by the depressing turn of events. I could see that the crowd were really up for a it, we all wanted to hear a big explosion of sound but it just wasn't coming yet. A couple of guys from Bath introduced themselves to me, explaining how they'd discovered this music from reading my blog (I always love it when people say that) and that this was their first live event. I felt bad for them cos I knew they weren't getting the full picture, although they seemed to be enjoying Plastician. One of them was a bit bemused by all the rewinds. He'd never seem a dj 'pull back' a tune before. I suppose I should've explained about the rewind tradition that comes from Jamaican soundsystem culture, but just said "that's the way its done in this scene, mate". 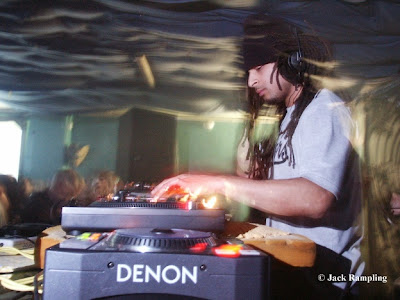 Behind the scenes, it transpired that the Environmental people had relented, and allowed the limiter to be switched-off, or changed to a different setting, or something. Whatever, by the time DMZ hit the decks, the soundsystem was finally operating at an acceptable level. It wasn't as heavy as Subloaded II, or even last month's Noir, but the sound was full, the bass was punchy and the high end was well-defined. It wasn't crushingly intense, but it sounded nice, and for that we were all extremely grateful and relieved. For me, this was where the evening actually started living-up to my ridiculously high expectations. Mala and Loefah, back-to-back, with Sgt. Pokes on the mic, delivered the goods in fine style. I reckon the absolute peak of pleasure was Loefah's "Mud" going into "Ruffage" (featuring what must surely be the perfect kick drum) and Mala dropping a new Coki tune called, I think, "Torture", utilizing one of those wonderful modulated bassline pulses, that was slightly out of sync with the beats, creating an amazing rhythmic swing that had the crowd in raptures. Mala also sneaked in a couple of his more Techno-influenced 4x4 bangers, including the luscious "Anti War Dub", which met with mixed reactions from my crew, some of whom come from a diehard d'n'b background, but my roots are in the 4/4 pulse of early House and Techno, and I think Mala's bringing a fresh spin on the format that's very appealing to these ears. Wonderful, fantastic music all the way. 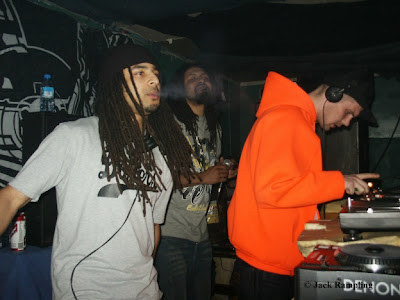 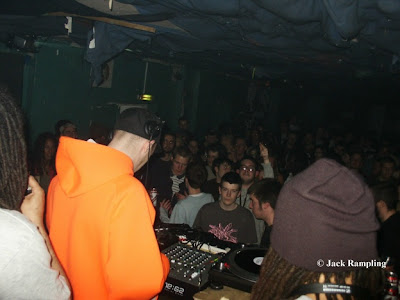 Next on were Vex'd, showcasing their new 'dex 'n' fx' format, which is still in development. Speaking with them beforehand, they explained that their ultimate aim is for a live set that doesn't rely on laptops, using hardware and bringing more 'physicality' to the performance. I think this could be a major development for live dubstep in the future. Even Loefah, a core devotee of the dubplate, has similar plans, and is already experimenting with an MPC unit at home. But for now, the set-up basically involves Jamie handling the turntables, with Rollie fiddling about behind him emitting a subtle range of bleeps, bloops and delicious blankets of pure dub-texture, like watery tape-echo distortion that sweep across the beats in ghostly waves before quickly evaporating. Vex'd are definitely interested in pursuing the more textural, atmospheric possibilities that were only hinted at on their album, and hopefully the results will see the light of day soon, although for this event Jamie was mainly selecting heavy-duty Vex'd beats, interspersed with a bit of DMZ, Distance and vocal grime. He's a very generous dj and likes to bring in lots of beats from other producers, rather than creating a pure Vex'd set. Pure class. 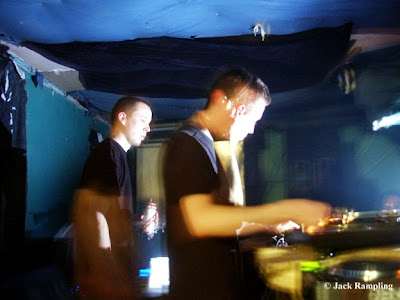 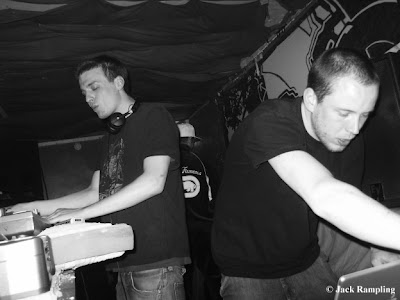 Youngsta was originally scheduled to play before Plastician, but somehow managed to get double-booked, so was put back to 4am. This was bad news for people like me who struggle through these allnighters, although if he had played in his original time slot the sound would've been fucked, so it was a no-win situation for me. I managed to hang on for the first half of his set, which even in my exhausted state, I could tell was superb. All the stories you hear about him being a very technically precise dj are true. It was a lesson in the art, no mistake. Of course it was all exclusive Transition 10" acetate business, the highlight for me being an amazing new Skream tune that starts out with the standard modulating bassline skank before suddenly plunging into a new section where the bass swoops and shudders in an astonishing way, the sonic equivalent of the sudden decent on a steep rollercoaster. Truly next level bassline science. Someone reckoned the track is called, appropriately enough, "Welcome To The Future", which seems to be confirmed if you look closely at Jack's photo, below... 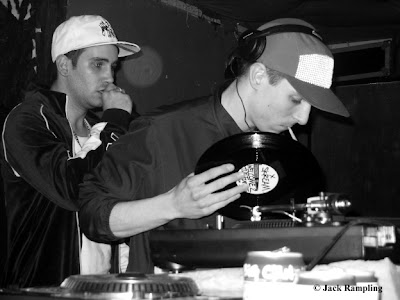 
Amazing stuff, but by this point it was 4.30am, so I reluctantly staggered from the building to the sound of "Monsoon". Despite the early misgivings, the event kicked-off when it really mattered and I'm still basking in the memory of that final three hours. I'm still bitterly disappointed for Headhunter, cos his set was so cruelly sabotaged, but we'll be seeing plenty more of him this month. It was a very respectable turn-out, despite that fact that there didn't seem to be a significant number of Londoners making the trek over. As far as I can tell it was nearly all local support, which is very encouraging. The vibe was generally positive, and everyone was really patient and understanding during the difficult early period. I think there might've been one or two individuals making twats of themselves, but nothing serious. Big-up all the crew who made it, including Appleblim, Boomnoise, Atki2, Delsa, Wedge, Luke Envoy, Pete Bubonic, Kymatic, ThinKing and Kid Kut, Rich B, White Boi, Jack (lush photos, mate!) , Kommonasmuck, and the bloke who traveled over from Aberystwyth. I'll finish with a mini-gallery of us, the punters, the fans and supporters, the fucking soundheadz, during those wonderful peaks of shared experience. Come meditate on this... 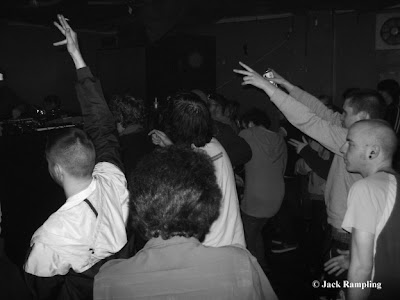 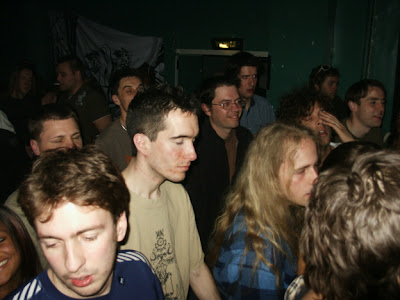 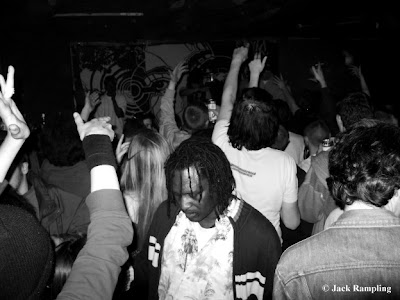 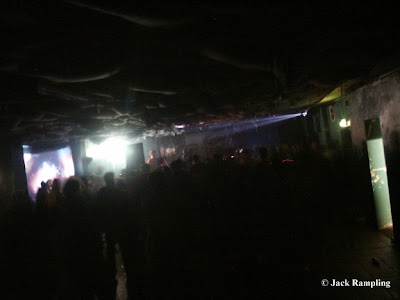