GUTTERTECH: CLEARING OUT THE CUPBOARD 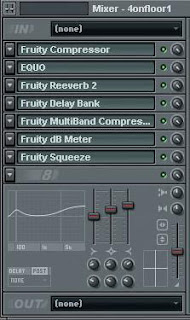 Despite being resolved to get back into producing this year, I only managed to complete a meagre half-dozen tunes, nearly all created within a brief two-month creative spurt in April/May. My extended absence from blogging should've been a perfect time to concentrate on the music, but it just didn't happen. I seem to be crippled by a deep-set lethargy. The ideas are still coming, and there's several other unfinished sketches lying around on my hard drive, yet I just can't find the will to see them through to the finish line. I think the problem might be the soft-studio environment I'm working in now. Although initially excited by the potential of FL Studio, I must admit I now find the whole thing a bit of a chore to work with. I see Fruity Loops now like an executive toy - fun to play around with for ten minutes, making a little 8-bar riddim, but then all the box-pushing, copying and pasting required to build it all into a finished piece of music just seems too steep a hill to climb. It's never really felt natural to me to build music in structured sections. I like to set something linear and repetitive in motion and then modify it at the mix-down, in real time. I like to feel that I'm performing as the music is recorded...applying freeform/intuitive improvisation, because I think maybe that's the part where a bit of my soul might leak out...or maybe just because I feel comfortable and satisfied by that approach. And of course that methodology requires a certain 'touchy-feely' interface with the machines, and that means hardware. It means knobs, sliders and switches, because I need some kind of physical relationship with my machines...which is maybe pretty weird, but that's just how it works for me. And I like linking machines with other machines...not just in the sense of midi/sync, but in terms of creating audio chains - jacking a drum machine into a distortion pedal, then into an echo unit, then through a synth filter...treating the whole studio like a big modular laboratory, surfing on a sea of quarter-inch jack plugs. Yeah, that's what making electronic music is all about for me. Of course I admire loads of stuff being done with software - I love the amazing results other people can obtain, but it's just not what makes me tick creatively. Listening to that Reanimator record that came out a few months back, and then reading Philip Sherburne's article on them in The Wire reminded me of the joys of hardware exploration, and I began to realise what I'd been missing. I've done my best to embrace this digital-virtual world, but a vital chunk of my creative instinct is stuck in the old analogue one. 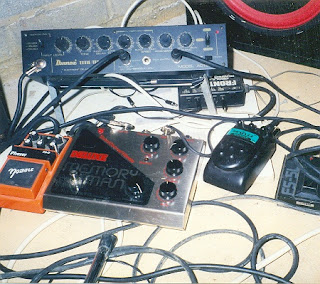 Okay, so now I've isolated the problem, but unfortunately I no longer have a hardware studio, other than a dusty old cassette four-track and a few other bits and pieces stored away somewhere. There's also a big cardboard box that's literally stuffed full with every type of audio connecting cable you can think of. At one point I was thinking of just throwing them all away, but now I wish I had a few machines to plug them all into again. The idea of rebuilding my old hardware studio is tempting, but right now I have neither the time nor spare cash to even consider it. Thankfully, the writing and dj mixing provide a sufficient level of creative outlet to make me feel that I'm at least doing something productive. I'm not sure what the far-flung future might hold for me, but for now I guess I'll have to just bide my time. The really irritating part is that I now have more industry contacts than ever - I'm pretty friendly with a number of people running good record labels, and if I only had some decent product I reckon I might've been able to convince someone to release it. But I'm just not cutting it as a producer. The tracks I made this year are okay...they're quite basic, but I wanted them basic, because I like to work with a very restricted sound-palette. I can't deal with too many options. Keep it simple. And they're all attempts to emulate older drum machine sounds and synth textures and dub fx, taking the feeling from the classic music that first inspired me, but trying to place it in a contemporary setting - which at that point was 140bpm halfstep. I was trying to realise my own personal take on 'Roots 'n Futurism', and there's a couple of things in there I'm actually quite pleased with, but I know they're not really 'marketable'. So I'm giving them away to you, dear reader. Some of my close friends and associates will already know some of these - "Show Dem 626" got played once on Wedge's radio show, "Cloister Bell" featured in one of Forensics' recent mixes, and I sneaked "Substation" into my own Afterimage Mix under an assumed name - but I think there's one track in there that's never been heard by anyone apart from me. Maybe it should've stayed that way, but what the fuck.

Guttadubz 2006
You know the deal with Yousendit links - this download is only available for a limited period. There will be no reloads.