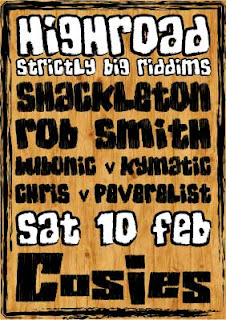 Highroad returns next month for it's second outing, after a very successful launch party back in November. The brains behind all this is Chris, Tom's right-hand man at Rooted Records. By the way, there's been signs of life at the Rooted blog recently, including some nice Youtube'd footage of Bass Clef's in-store appearance.

#2 looks like another winning combination, with headliner Shackleton's stock at an all-time high recently, due in part to the Villalobos connection. Looking forward to seeing Sam play-out. I've met him a couple of times but never managed to catch the man in action. As with Bass Clef, there will be an in-store appearance/performance at the shop beforehand at about 6pm.

Apparently Rob Smith has been writing 'wicked' dubstep tunes and is promising a hot selection, new and old. Sterling support coming from local heroes Pete Bubonic, Kymatik, Peverelist and Chris himself - probably playing a bit of reggae early on (but c'mon mate, can't you think up a catchier DJ name?!).

Cosies is a tiny venue, and I reckon it's gonna be fucking rammed for this, so get down early to avoid disappointment!

See you there, all being well...


On the subject of Rooted, it's good to see the online store is expanding it's horizons, with the vinyl section now including reggae, jungle and, er, 'other'. There's so much more to Rooted than just grime and dubstep, and I'm really glad they've decided to upon things up a bit. But it's still only a small part of what you can find in the racks. Sure, they've got the latest Sleeparchive doublepack, but when I was in the other day I managed to scag a couple of hard-to-find limited techno pressings I'd been searching for, which weren't listed online. There isn't much demand for minimal techno, apparently, but Tom's on a mission to keep a few choice releases on the racks for discerning customers. Always worth e-mailing if there's something you want but can't see on the site. You never know...

Tenuous Shackleton link to Minimal Techno: Sam shares a name with the famous explorer Earnest Shackleton, who had a right miserable time when his ship got stranded on Elephant Island. The first Sleeparchive ep was called 'Elephant Island' too. Surely this is no coincidence? Eh? Eh?!