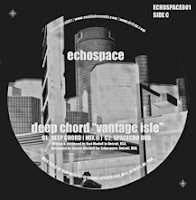 For all addicts of dubby ambient minimal techno, you gotta grab a copy of the new Deep Chord release. It ain't cheap, but 'Vantage Isle' is some of the deepest shit you're likely to hear this year. The various versions are spread over two 12-inch and one clear-vinyl 7-inch, sheathed in a plastic sleeve. As usual, produced in Detroit by Rod Modell, but with additional remix/collaboration from Convextion and Soultek, this is the sound of the Motor City dubmerged in Berlin. The ongoing data-exchange between these two cities can still throw out some incredibly subtle, emotional music. Modell has been a shadowy figure for a number of years releasing limited-run vinyl transmissions, but this release, the first from new imprint Echospace, suggests he's ready to start claiming some much-deserved respect and attention in the current Basic Channel-inspired climate of atmospheric chord-based, echo-drenched techno mindscapes. Grab it at Boomkat (if you can afford it!)