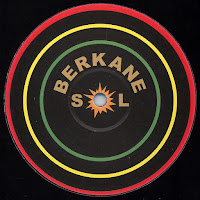 The music of Nottingham-based Geiom first came to my attention when 'Overnight Biscuits' featured on Kode 9's 'Dubstep Allstars Vol.3'*. Since then I've been following his releases with keen interest. It seems he has a bit of history in the world of leftfield electronica dating back to the beginning of the millennium, but I only know him for his dubstep-influenced material, released via his own Berkane Sol imprint, of which there have been four EPs so far. Each release has been big on quality and innovation, featuring imaginative and complex arrangements with a strong sense of composition, texture and powerfully emotive melodic phrases. Recently he has been incorporating guest vocalist, firstly with Terrible Shock on 'Feel So Bad', where Geiom's empathic harmonies create a seductive, mood-manipulating wash against the vocalist's tragi-comic, patois-inflected account of a relationship in meltdown. For the latest release, 'Unnecessary Stress', Geiom reduces chanteuse Marita to an eerie spectre; her breathy improvised scats flit like wraiths across a restless percussive landscape to spellbinding effect. I hear on the grapevine that there might be a CD compilation on the way, but for the uninitiated, here's a quick (and occasionally wonky) résumé of what's happened so far...


*Still my favourite in the Allstars Mix series, for it's dynamic range and scope of vision. As Kode states in this interview for Montreal's Mutek festival, "I prefer to hear tracks in the mix together for extended periods of time, and I like to hear the tension between two tracks..", which is a dj'ing philosophy I entirely agree with and aspire to, when mixing dubstep. Some interesting quotes from Shackleton and Moritz Von Oswald in the article too - thanks to Paul for the link!
Posted by N.E. at 12:35 AM