Well the rest of the UK might be drowning in misery at the moment, but I had a lovely time at Under_Score last night. When I arrived a little before 10pm it was a bit quiet and I didn't recognise any familiar faces (though luckily I had the ever-reliable Doppleganger for company). Nevertheless, I instantly felt at home in the familiar surroundings of Cosies' tiny basement, with a soundtrack of lush dubby techno emanating from the speakers, which turned out to be the last ten minutes of Jim Petherwick's early set. Jim plays off vinyl, but also employs a loop sampler, which enables him to perform some neat little tricks on the fly, like energising Rhythm & Sounds' languidly gorgeous "We Been Troddin'" with a steady 4/4 kick, before mixing seamlessly into Deep Chord's "Empyrean", one of my favourite tracks from the recent 'Coldest Season' series on Modern Love.

Following Jim was another Under_Score resident, Placid, who kicked-off with some classic dubstep, like Pinch's "Qawwali" and Digital Mystikz "Lost City" (from the impossibly rare DMZ002 EP). I suddenly realised it's been ages since I heard those tracks in a club - you just wouldn't hear them at an actual dubstep night anymore. It was actually quite refreshing to hear djs simply playing great music without all the obsession with exclusivity that drives the dubstep economy. After Placid came Harry Glazebrook, peddling a nice line in funky minimalism with a bit of 2 Step garage thrown in for good measure, although when he tried playing a bit of Roll Deep he instantly cleared the floor - not the sort of response I usually equate with a Wiley production! After that came headliner Tom Ellis with a live laptop set showcasing his tight, fidgety minimal house sound, before Jim returned to the decks for a back-2-back session with Luke Malcher, cranking out a steady stream of top-drawer tunes from the likes of Sleeparchive, Redshape, Marcel Dettmann, T++ and a bit of Mala too.

The venue did get a bit busier over the course of the evening, and it was nice to see a pretty even male/female ratio (I'd had visions of it being a bit of a boy's club). In fact the crowd was getting quite hyped towards the end, in a mellow sorta way. A couple of familiar faces from the dubstep scene did eventually show-up - Tom 'Peverelist' and Mike 'Madboy' (the guy who made that 'Living Inside The Speaker' dubstep DVD). Mike in particular was having a whale of a time and I've never seen him so animated. For my part, having spent the past year listening to techno again in the solitary confines of my home, it was great to connect with this small band of like-minds. I guess I'd been put-off the idea of techno clubs because of some of the associations with mega-raves and pills, which is frankly a bit too wild for my tastes these days. But Under_Score had a nice intimate atmosphere and I didn't detect any obvious pill-head activity. In fact, it struck me that here was a little room full of all the people in Bristol who, like me, just enjoy minimal house/techno on it's own terms, without any reliance on chemical enhancement. It felt a bit like the early dubstep nights at Context and Ruffnek Discotek - a mini-communion of those 'in the know' which is a horribly elitist thing to say, but frankly I don't care. The important thing is, it feels like I've finally found a 'way in', an entry point to shared experience that's conducive to my way of life. Plus it was great to make a few new acquaintances like Jim, Duncan and Richard Carnage (of Tape blog infamy). Duncan has plenty of ideas for future Under-Scores, not least booking Baby Ford to headline the next one in September, which is great cos at least then I won't be the oldest person in the room for once.

Anyway, here's a few pics to finish with... 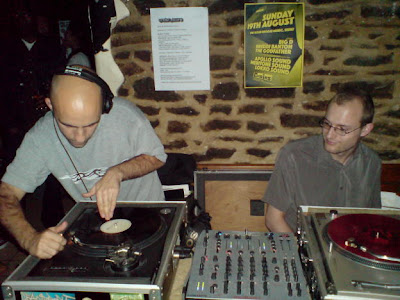 Jim Petherwick and Luke Malcher battling it out 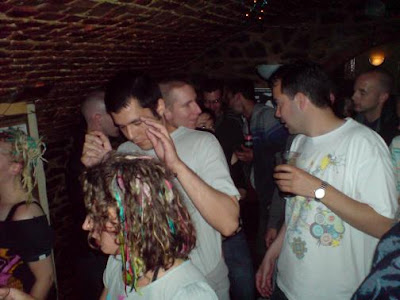 Crowd scene, with Placid on the right 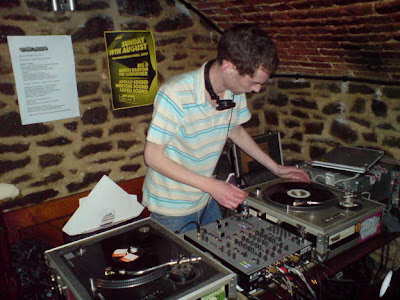 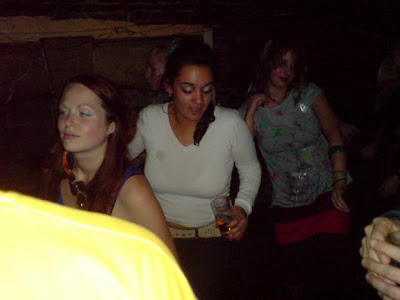 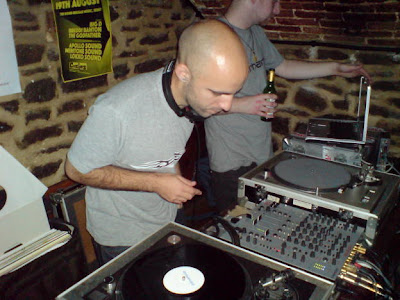 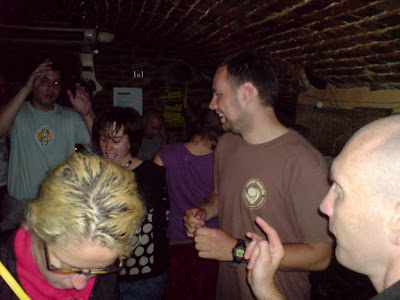