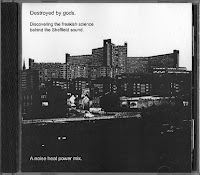 Whilst googling for info on Sheffield-lore (for a forthcoming blog post) I came across the 'mind spillage' of Noise Heat Power, the website of one Damon Fairclough. It's a bit like a blog in the sense that its an outlet for Damon to thrust all the detritus of his life onto the worldwide web. But what concerns us here is "Destroyed By Gods" - a very personal tour through the musical heritage of Sheffield from 1980 onwards. As someone who's always been an admirer of the Sheffield sound(s) from afar, I found Damon's observations of life in the thick of all that activity very compelling and evocative of the era. He also has some very perceptive comments to make in relation to the music as well. It's a great read and an unusual mix that wanders through various points in the Steel City's musical evolution in non-chronological fashion, throwing up some unusual stylistic juxtapositions. Whilst covering the classic early Warp 'bleep' era, it also delves further back to Sheffield's earlier phase in the Post-Punk/New Pop age, along with some of the forgotten future-funk excursions of the mid-eighties (who remembers Chakk and The Box these days?!). Here's a few additional comments about the mix from Damon, that come from our recent e-mail correspondence...

There are a couple of beat-matched passages but it's mostly segued. To genuine DJ ears it will no doubt sound rather rudimentary; I'm not a DJ, have never played out anywhere, and just fiddle with MP3s for my own listening joy. Besides, with the variety of styles it doesn't really build a groove as such; it's more about trying to put different sounds and moods together in a way that seems 'right' and expresses something that I feel about the city. It's quite personal in this regard - there are far more 'typical' pieces by Cabaret Voltaire for instance, but the ones I've included are the tracks that coincided with my own immersion into the scene and that I felt had an atmosphere of the Sheffield I was growing into.

I should add that I no longer live in Sheffield - I've been in Liverpool since 1995, so for me the city has kind of 'frozen' as a memory; the Sheffield I now go and visit is ever-changing and feels quite different. I suppose it's the same everywhere. So in thinking about concrete and brutalism and raw electronics, I'm aware that this is a Sheffield that is fast disappearing; a good thing too for those who still live there, but I'll always remember the creativity and energy in that seemingly desolate landscape - my 'long lost 1984 of the soul'.