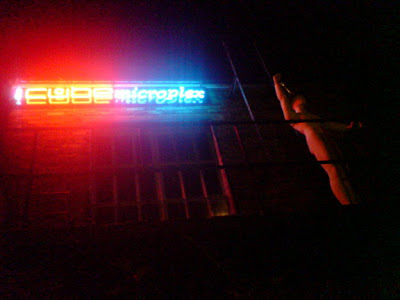 Last night's concert at the Cube Microplex was a blast. First on the agenda was resident sound-boffin V.i., who specialises in dramatically minimal live electronic improvisations full of terrifying subsonic frequencies that pushed the Cube's soundsystem to the limits of endurance. The subsequent crackling and rattling emanating from the speaker stacks as they shuddered in distress added an additional point of interest! The nearest comparison I could make would be with Pan Sonic/Sahko Recordings, and speaking to him afterwards V.i. acknowledged their influence. He'd dragged his son along to the event as well, and I spotted the kid dutifully watching his old man from the sidelines, although wisely the little chap chose to wear ear muffs. V.i. has no immediate plans to release anything, although he often records his live performances. He has a website here, for anyone interested in finding out more.

By contrast Hungarian duo Agaskodo Teliverek ('The Rearing Stallions'!) were practically light relief, performing their hi-octane surf-guitar instrumentals with pounding machine beats whilst dressed in matching uniforms of white face make-up, tight t-shirts, red shorts and white socks and plimsolls. It shouldn't have worked, but somehow it did, and me and the Doppelganger were bouncing around enthusiastically, which isn't easy in a seated venue! I had to take a picture just to prove I hadn't dreamt the whole thing... 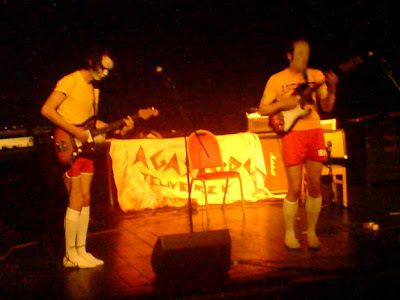 The main attraction was DJ/Rupture sparring with guitarist Andy Moor. Rupture's selection of grimey bass riddims gelled surprisingly well with Moor's exploratory fretboard antics. His use of violent, mangled blues chords and detuned strings made me think of Pink Floyd's "Interstellar Overdrive". In fact at one point it sounded like Syd Barrett jamming with Slew Dem. Occasionally they'd veer off into total free improvisation, with Rupture conjuring some extraordinarily obnoxious sounds purely from vinyl manipulation. I was getting into it, but then Doppelganger muttered something in my ear along the lines of "my kids could do that" which kinda broke the spell. But all told it was fascinating to watch these two men, of widely differing age and background, drawing on their experience to create something fresh and spontaneous. I shall treasure the 'Live In France' bootleg CD they gave me. There's a track available to download over at DJ/Rupture's blog. Check it... 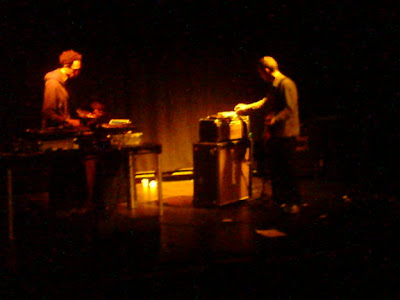 And then of course there was me. Providing four hours of cool muzak in the bar is nothing to an old pro of my calibre. I took it really easy, just playing tunes at a leisurely pace and drinking a few beers along the way. I brought along far more music than I actually needed, but over the course of the evening I played a bunch of oldies from the likes of Miles Davis, Cluster, Aphex Twin, Jacob's Optical Stairway, Alice Coltrane, Black Dog, Wagon Christ, Photek, KLF, Autechre, Renegade Soundwave and J. Magik, plus a bit of Scandinavian Skweee and not forgetting Doppelganger's Lord Depth remix. When the live acts were on I'd just leave an ambient CD playing at low volume and wander into the auditorium to check the vibes. I stepped up my game at the end though, actually doing some proper mixing, spinning dubstep from all the usual suspects - Kode 9, Mala, Coki, Pinch, 2562, Peverelist, Gatekeeper etc, and finished the evening with a couple of deep dubby techno numbers from the two Svens, Schienhammer and Weisemann. To be honest I don't think anyone was taking a blind bit of notice, but it was all very enjoyable and I'd be happy to do it again if ever they ask me. Cheers! 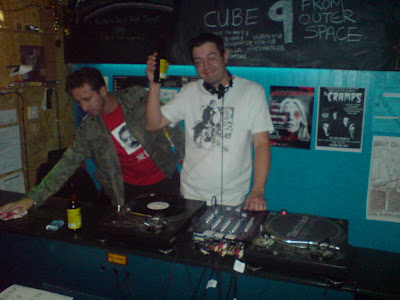