ICE BIRD SPIRAL AT THE CROFT 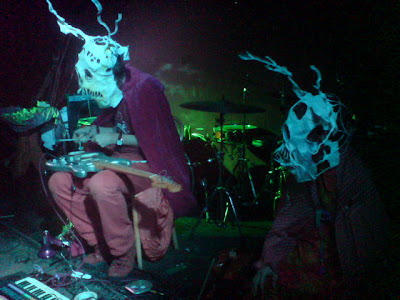 They do things a bit different down in Yoevil. Last night I had my first experience of Ice Bird Spiral, the duo comprising of West Country dad-bloggers Kek-W (of Kid Shirt fame, among other things) and fellow psychedelic astronaut Cloudboy. As you can probably tell from the above picture, this wasn't the usual Gutter-fare that I generally write about. This was a beatless free improvisation performance using all manner of objects to create sound. Just a quick glance around their 'instruments' (see pic below) revealed various electronic toys, a thumb piano, kitchen utensils, an '80s Casio keyboard and a Stylophone, all linked in some arkane organic modular system, with the jack leads snaking out from the motherboard like umbilical cords. Almost everything was close-mic'd rather than d.i.'d, but then fed through the mixer into a signal chain of reverberation, echo and distortion, so it was really an electro-acoustic performance. There were a few pre-prepared backing CDs, emitting subliminal loops and occasional bursts of subsonic throb, but there was a continuous flurry of activity from Kek and Cloudboy as they strove to capture something tangible from all this junky gear, searching for sonic possibilities in found objects. At one point Cloudboy began 'playing' some circular metal discs, without much success...but then he returned to them later and got the right combination of movements and mic-placement and made those discs sing like banshees into the ether. Kek's all-too-brief Stylophone solo was a blood-freezing hauntological blast from some half-remembered past, momentarily transporting me back to somewhere around 1973. Then there was the 'primal screaming' section, where the lads' phlegm-encrusted yelps and screeches were made even more creepy and disembodied emanating from their expressionless skull-mask features. I thought it was great, and really funny in the peculiar and 'ha-ha' sense. I even bought a couple of their lovingly hand-assembled cd-r packages. Nice to see a small delegation from the local dubstep scene turn out in solidarity (big-up Appleblim, Peverelist and Gatekeeper) plus fellow dad-bloggers Doppelganger and Loki, and not forgetting my old mucker Mike. 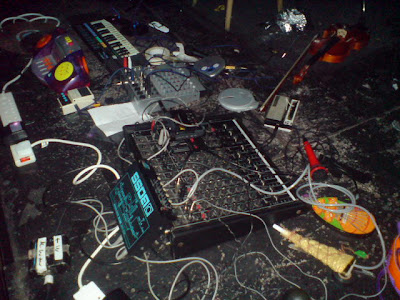 The bonus ball was seeing headliners Sunburned Hand Of The Man afterwards. They're one of those groups I've seen mentioned a lot, especially in The Wire, but never heard anything by. Kek explained that their line-up and musical emphasis was a bit fluid, but on this occasion they were a five-piece playing extremely groovy acid rock jams, combined with electronics, vocals and a mellow interlude section where they started building sculptures out of bit of mannequins and tree branches. You had to be there. It was a bit traditional in some ways with the wah-wah guitar solos and such, but there were some really intense peaks of energy and sonic overload, and it was the most enjoyable live band experience I've had in a long long time, definitely worth checking out if they're ever in your area. I bought a copy of their new limited vinyl LP "A Taste Of Never" from the stall afterwards. Nice to have a little memento. 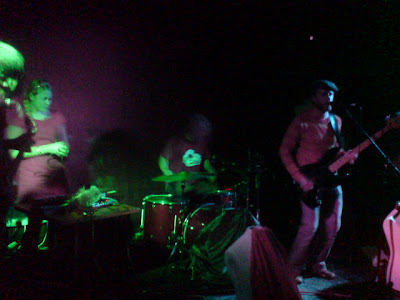