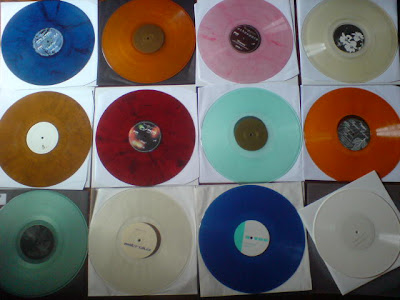 Dub Techno: the micro genre where the format of choice is the limited edition 12 inch, preferably on coloured vinyl. Not any old colour though. No sexy opaques like Neon Green or Hot Fucking Pink. The general rule is to go for the transparent look with a tint of colour, with maybe a bit of a marble or smokey effect too. This sort of thing is a total turn-on for the collector in me, and the limited quantities only add to the allure - this is what proper record collecting is all about: the thrill of the chase, the searching, the time and expense, the drool wiped from the chin when product finally grasped in sweaty palms, the gasp of horror and fear of impending financial meltdown when the credit card bill arrives.

Of course there's plenty of standard black vinyl editions too, and I truly have spent far too much money on these bloody things this year. And frankly some of it's starting to sound a bit samey; as entrenched in its own quagmire as anything coming out of dubstep. The honeymoon period is over - next year I start getting extremely picky. But what's the appeal of this particular sound anyway? There's a statement of intent printed on the label of Atheus' "In Chain FX" that kinda nails it for me:

The hum of the over saturated compressor, the hiss generated by dubbing and overdubbing, the psychoacoustic phenomena of the phaser/flanger, the neverending feedback noise reinjecting it's own signal through echo+reverb; that is what I like.

Which basically amounts to: I like Basic Channel. But it's very difficult to successfully make that style of dance music that kind of hangs in stasis, barely changing over the course of ten minutes, reduced to the state of a still-life. Atheus is one of the better BC imitators, his tracks dropping considerably below the 120bpm barrier, swallowed in a fog-haze of reverberation. But I also like some of the structuralists, like Sven Weisemann, who's "Shade EP" is a particular favourite of mine, cos he injects a sense of movement and development that you can actually discern taking place. Ovatow's "X-Dub" is great too, with it's edgy percussive blips adding an extra element of persuasive rhythm. Modest & Soulinterface's "Stronger Through Pain EP" bitch-slaps the whole scene and dares to get funky. Beat Pharmacy's "Frozen" might be dangerously close to muzak, but it injects some proper lo-end beef. Murmer's perfectly named "Undertone" album opts for a cleaner sound, yet incredibly understated with its muted frequencies and sense of d(r)ead-calm. Leading practitioner Quantec gets it right with "Lush", but all too often falls into a stupor of unchanging uninvolvment. Substance & Vainqueur continue to do their thing, representing the original '90s Berlin sound with style and panache.

Then of course there's the US crew. Deepchord/Echospace continue to fire out the classics. Just recently original UK techno pioneer Lee Purkis aka In Sync (who came out of retirement with his Fortune8 imprint last year) has released not one, not two, but six Echospace-related EPs almost simultaneously and they're all bloody great. I'm really feeling that ambient-electro flava that Soultek brings on "Lighter Path" and cv313's "Affinity" is a masterful slice of kinetic deepness that isn't afraid to sound a bit 'up'. If anyone's gonna shake-up the dub-tech scene and take it forward, its these guys. I just wish I'd gotten in to them sooner. I'm still chaffing over missing those super-limited Octal releases, which now fetch obscene prices. I'm just praying for the repress.
Posted by N.E. at 3:31 PM