IT'S THE PARTY SEASON...

Its time for the HENCH show www.subfm.com xmas spectacular!!

We've hijacked subfm for 4 hours on the 18th of December to have a big xmas house party. We are broadcasting the show live from 8 until midnight, showcasing the best of the Bristol dubstep massive.

PLUS A FEW MORE DJS AND MCS TO BOOT

I may even make a few mince pies and mulled wine...nice pie

With special guest...
PINCH
our very first guest back once again for our Christmas Party!

HEADHUNTER
the boy has missed a few H.E.N.C.H. nights due to being a mega tron superstar but he's back and he's H.E.N.C.H.

Jakes cannot make this after all... big gig 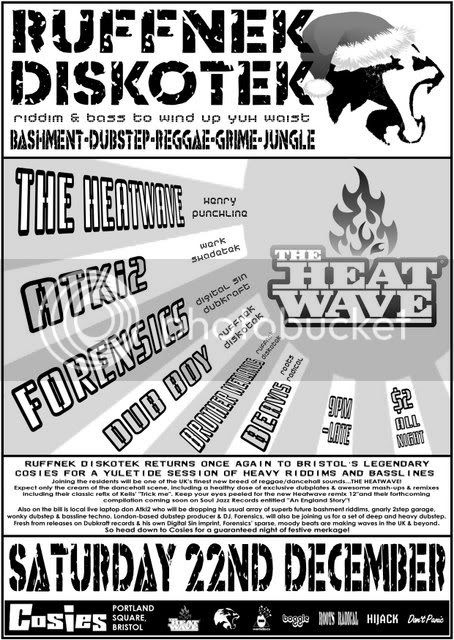 I can't believe it's fuckin christmas already. Bloody hell it's come around quick, im gonna have to start thinking about presents and all sorts soon. Blimey. Anyways as a reward for doin it I'm gonna go and get hammered at Cosies. I'd be delighted if you come join me and the crew!

Drinking mulled wine and eating mince pies on the night are....

FORENSICS (Dubkraft / Digital Sin)
Our London rep & Original co-founder is coming 'ome for Xmas! Bringing mean n murky dubstep beats to the confines of Cosies for a proper skank. Mix cd's giveaways will be part of the show im sure

BEAVIS
And of course the yout'man rootsman in session! Yes i!