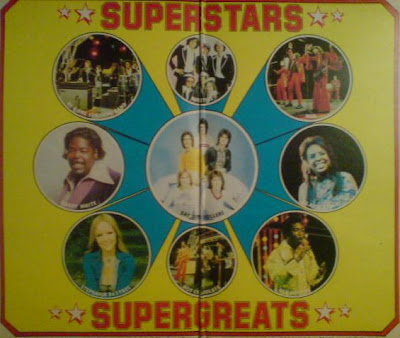 It seems I've been implicated in some bullshit chain-post, thanks to my 'mate' Doppleganger. Still, nice to see that inter-blog discourse can still exist in the cold, dispassionate wasteland that passes for the blogosphere these days. I'm increasingly less inclined to bother with blogging/reading blogs these days, apart from checking a few of the good guys - you know who you are. Matt's fucked off, and who can blame him? I'm gonna hang in there till this blog's fifth birthday (in August) and then do the same. I'm bored with the format, bored with the endless inanity spewing from the mouths of a bunch of unelected 'tastemakers' and bored with you too, dear reader. Same goes for the forums. I guess I've just O/D'd on the whole thing. So from now on I'll be concentrating on writing elsewhere (mainly in the world of print), along with trying to play out more and work on some beats.

Okay, rant over. Now, assuming you're still reading this (dear hurt and insulted reader) it's time to break out the platters that matter and take a brief, horrifying tour through the guilty pleasures that lurk at the back of Gutter's collection. Not a pretty sight, I assure you. But first I should explain that, for the past 25 years I've applied a pretty fucking rigourous set of aesthetic principles to my listening habits, consequently there's nothing particularly embarrassing in my collection from the past few decades. Or if there is, it's something I don't even like anymore, can't remember how I ever liked it in the first place and keep meaning to take it to the charity shop (ie, cd single of Robert Miles' "Children" - seriously, how the fuck did that piece of shit end up in my possession?!)) or it belongs to Mrs. Gutter or one of my kids. So I need to go back much further, to the 1970's - a time when I absorbed music with the sort of mindless optimism that only childhood can offer. Chart-Pop music was the soundtrack to my life then, thanks to my parents, who both had pretty straight-ahead mainstream populist tastes. Radio 1 was constantly buzzing from the transistor radio in the kitchen (with useless cunts like Noel Edmunds and Dave Lee Travis on the wheels of steel) and there was often a stack of 7" singles cue'd-up on the stereo (actually, I think our household was still operating in mono back then) . I was surrounded by pop music on all sides and didn't even know there was an alternative option. Ignorance is bliss. So even though me and chart-pop parted company in adult life, it's still my first love, and practically anything that hit the Top 40 from roughly 1969-1983 will probably send me into instant swoons of pleasure and pangs of loss for the happy(ish) childhood now long lost. You can keep your ambient/electronic attempts to creep me out with all that 'Huantology' crap - its vintage pop that truly sends the sparks flying in my head, spitting out barely-glimpsed snatches of memoradelia, kickstarting those grainy cine films of the mind's eye that play real or imagined fragments of early life.

Interestingly, having made a quick Top 10 list off the back of my head, a little research revealed that all the songs come from a much more truncated five year period ('73-'77), with 1974 and '77 being particularly rich years (dates are included next to each song, along with highest chart position as per my trusty copy of the Guiness Book of Hit Singles). My parents separted at the end of '77. Make of that what you will. Okay, enough fucking about, here's the list...

The New Seekers - You Won't Find Another Fool Like Me (#1, Nov 1973)
Yeah? So? You got a problem with that, mate? Perhaps you think it should've been "I'd Like To Teach The World To Sing/Buy The World A Coke"? Must admit I was kinda torn there myself...

Rubettes - Suger Baby Love (#1, May 1974)
You may scoff, but modern performers/producers are physically and emotionally incapable of creating music as soaringly beautiful as this.

Marmalade - Falling Apart At The Seams (#9, Feb 1976)
Why don't songwriters use chord progressions like that anymore? Total lushness.

The Floaters - Float On (#1, July 1977)
Great name, eh? Sounds like something I left bobbing about in the toilet yesterday. I would've included more black/soul artists but they just don't seem to be as cheesy as the white-ass shit, do they?