THE SINGULAR SOUND OF FORENSICS 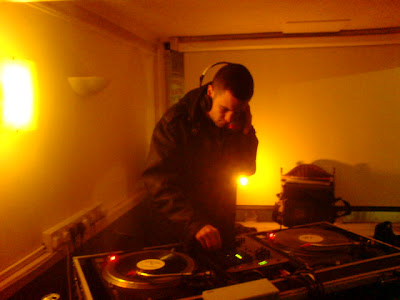 Anyone who's been reading this blog for the past couple of years will no doubt be familiar with the name Forensics (aka Krys Taylor - one of those shady characters who I associate with). Co-host and resident dubstep dj at Ruffnek Discotek, he's also well-known to the international crowd through his mp3 and internet radio mixes along with his incontinently prolific output of self-produced material, which is the focus of attention here on account of his latest collection of 'tunes' (I use the term in it's most figurative sense).

One of the many cd-rs Krys sent me over the years was called the "Deadstep EP". Such a perfect name for his sound - I wish I'd thought of it. Nominally working within the halfstep framework, Krys often accentuates the 70 bpm undercurrent to the point where it's hard to discern any vestige of the 'true' 140 bpm tempo, resulting in a catatonically stilted, zombified groove that absolutely fails to work as dance music for anyone with a pulse.

Have you ever seen Krys trying to dance? Wrapped in a black overcoat, shoulders hunched, hands clutching a beer and illicit spliff, feet firmly rooted to the floor, twitching and swaying in an awkward, ungainly fashion. That's a visual representation of his music, which is the nearest thing to an audio representation of THC-induced paranoid psychosis I've ever witnessed.

His latest 10-track collection is called "The Singularity", released as a CD and download through Digital Sin Recordings. Maybe it's the extra mastering 'zing' added by Pete Forsaken, but I reckon it might be Krys' finest work to date. The sounds really leap out at you, and that's Krys' biggest strength as a producer - the 'sound design' aspect, layering dramatic bursts of hi-tension sound against ambient background shades and occasional soothing melodic passages. Obviously there's a lot of attention to detail in the way Krys arranges these atmospheres, and once you accept that it works more like quasi-soundtrack music or even Industrial music rather than dance music, you can begin to appreciate the work that's gone into it.

Forensics. Why not try something different today..?

Buy The CD at Barefiles