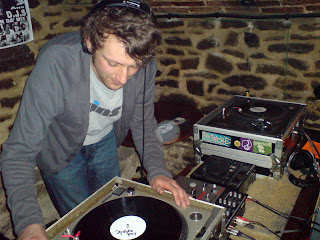 Me and Doppelganger arrived at Ruffnek Diskotek early. The intimate surroundings of Cosies were eerily quiet: a sparse crowd and even sparser sound as the Doomstep thud of Forensics penetrated insidiously into the dark corners of the room. Apparently Krys has already sold out the first batch of CDs of his album. Maybe there's a market for this stuff afterall.

By the time Appleblim arrived a couple of hours later, the scene had changed dramatically - standing room only and the crowd nicely hyped by Brother Wetlands, followed by The Bandit. 'Blim's selection was dominated by the awesome liquid dub of 2562, who's clearly reaching out to whole other levels of techno-inflected depth. Watch out for his next Tectonic 12", "Dread Techno/Enforces"- a delicious taster of his debut album. Also heard were some nice spangly Martyn remixes, a couple of tasty RSD cuts and a surprising excursion into Peverelist-style hypno-dub from Kommanazmuk. The track's called "Bad Apples" and it's bloody great. Appleblim still found room for the more atmospheric end of the halfstep/wobble equation, including a track by Breakage (better known as a brand-leader in the drumfunk scene) which sounded very impressive. Apparently he's made quite a few tunes in this style. For me the set did start to evaporate into a wobbly stupor towards the end, though finished on a sublime note with "Circling".

We hung around for the early part of Dub Boy's set which was a showcase for some wicked Atki2/Monkey Steak tunes due for release on the new Steak House label soon. The kids were loving it and the party looked like it could've gone on all night, but these old bones were ready for bed. As always, a pleasure to link with all the crew in attendance - Thinking, Peverelist, Kid Kut, Atki2, Richard Carnage, Gatekeeper, Wedge...and good luck Beavis with the exams!
Posted by N.E. at 10:47 PM