Thanks to Paul for some additional thoughts on Imagination's "Night Dubbing". Fascinating to read an alternative view of this album's relevance from someone who was actually into it at the time.

As I mentioned in my post, Boards Of Canada sampled Imagination on the track "We've Started Up", which appeared on their privately released cassette "A Few Old Tunes Vol.2". I wrote a bit about that nearly four years ago in this post on bootleg recordings. I made my own one-of-a-kind bootleg cd-r of "A Few Old Tunes Vols. 1 and 2" which I'm very proud of, though I'd still buy them if they ever got an official release! 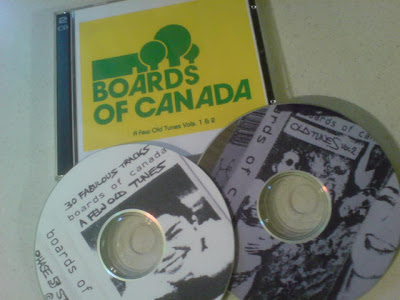 I find that I play these discs just as often as the official releases. I find it fascinating to hear all those early stages of their development, many of which are very sketchy, and particularly those little fragments of '80s pop music that crop up (there's one track that features a pitched-down loop of Toni Basil's "Mickey"). For a group who are now known for being very conceptually deep, and who trace subliminal audio links to the 1970's (true hauntology pioneers, these boys) I think it's wonderful that they once messed about with the detritus of 80s pop, made most implicit on the "Unreleased Tracks" promo 12" that appeared last year. 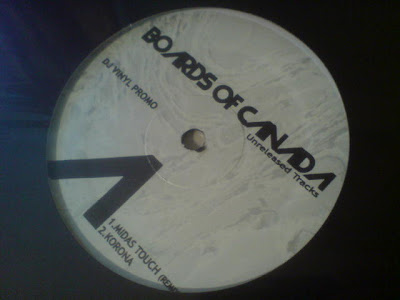 This highly suspicious item, possibly of Dutch origin, is almost certainly an unsanctioned release. Even the title is a misnomer, as three of the tracks were originally released on Skam's Mask series in the late '90s under the Hell Interface moniker (the fourth track only ever appeared on the "A Few Old Tunes Vol.1" cassette). But for those of us who weren't hip enough to notice those first time, and aren't prepared to pay the massively inflated prices to obtain secondhand copies today, this ep plugs a hole in the collection for now. Although "Korona" is a straightforward instrumental, it's "Midas Touch" and "Trapped" that really do it for me. Both sample the full vocals from the '80s hit records of the same names, recorded by Midnight Star and Colonel Abrams respectively. As such they were dodgy bootleg mixes in the first place, so BoC shouldn't feel too aggrieved about this cheeky re-issue. The decision to 'borrow' those vocals might simply have been down to providence, as the original 12" singles featured acappella mixes on the b-sides, but still I think it's great that BoC should own those records in the first place and feel suitably inspired to absorb them into their own mythology, revealing once more that sense of shared history and experience I get from their music - just one more reason why they'll always be 'my band'.
Posted by N.E. at 11:05 PM