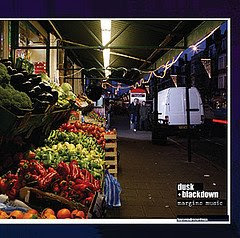 Perhaps the most genuinely fascinating long-play experience in recent times, Dusk + Blackdown's "Margin's Music" is a concept album of sorts. As a music journalist, Blackdown (aka Martin Clark), has almost single-handedly mapped the evolution of London's Grime & Dubstep scene(s) via his blog and regular Pitchfork column with a rigourously analytical eye, so its no surprise that, as an artist/producer he and his partner Dusk have come up with such a complex, detailed concept piece. The basic premise of "Margins Music" is to create a kind of audio journey that "meanders around the Capitol's edges", documenting the beats and atmospheres that emanate from the nocturnal avenues.

Beginning in East London's Limehouse district, the first couple of tracks are, beat-wise, in a pretty recognisable zone, with very dry halfstep beats of the kind we've been hearing since around 2005, but still brimming with viscous layers of textural atmosphere. A good scene-setting intro. Then comes the familiar opening bars of "Lata"...but then the track drops down to the vocal before suddenly ramping up the energy with a new 'V.I.P.' riddim. We're now in the thick of London's Asian community, from Green Street through to Wembley, and for me this is the absolute highlight of the whole album, with both "Kuri Pataka (The Firecracker Girl)" and “Rolling Raj Deep" brilliantly merging elements of Punjabi, Hindi and Urdu vocals, Bollywood soundtrack strings and rippling tabla percussion over throbbing sub-bassic beats and swooping synths. Shockingly great stuff!

"Concrete Streets" introduces a very direct grime element care of Durrty Goodz, providing guest vocals with a splintery Bollywood sample chasing his tail as we move into the grimey heartlands of Bow, Hackney, etc. The track works well, very authentically produced, and I guess it had be in there to represent that side of Blackdown's world, but still I can't help feeling that the MC element works better when used as an ambient sound source in it's own right; as ominous background chatter and looped phrases as displayed earlier on. It sounds just like a Grime track, rather than a fleeting snatch heard from a car stereo or whatever. I guess I'd rather keep that feeling of 'audio tourism' (similar to what David Holmes achieved on "Let's Get Killed" - though of course that really was tourism, rather than documenting his own surroundings). But then Trim takes a turn on the mic on "The Bits", which is the half-way point of the album that kinda plods a bit for me. Maybe it's Trim's resolutely 'London T'ing' attitude - all that talk of "I didn't grow up with you, we didn't go to the same nursery, I ain't got no love for you, you weren't there when I was thirteen" is just alienating and off-putting to me, but this is their world and I can totally understand why Blackdown takes the tour down this route. He wants us to take a real hard close look at the psychological make-up of this scene, even if some of us aren't really in the mood to deal with it.

The tone is temporarily lifted by "dis/East" - a superb melange of glassy, gloopy texture over taught, staggered beats, that feels like gliding through pristine cosmopolitan enclaves, before descending into the hellish nether-world of the Turkish/Kurdish areas on "This Is London", a low-slung, dirt-ravaged quagmire where furtive, shady characters loom from the shadows to impart a few harsh realities.

From there we begin to move south towards Norwood, Purley and, inevitably, Croydon, for the final leg of the journey, with the music getting noticeably more 'tracky' whilst introducing African and Japanese sonic elements. Both "Iqbal’s Groove" and "The Drumz of Nagano" are further brilliantly realised instrumentals full of textural detail flickering furtively around the central core of molten bass-pressure and reverb-drenched percussion. But then final cut "Focus" is another matter entirely: a chink of light shining through after all the oppressive darkness. Clean, synthetic, full of bubbling synths and 808 rimshots, "Focus" seems to find salvation from inner city life through a kind of Technofied vision of Utopian futurism, similar to the Detroit artists, though in fact the track was inspired by Dusk witnessing a Peverelist dj set at Subloaded in Bristol. Which means that, in a funny sort of way, my own personal journey through this album ends up back home. What could be more perfect than that?