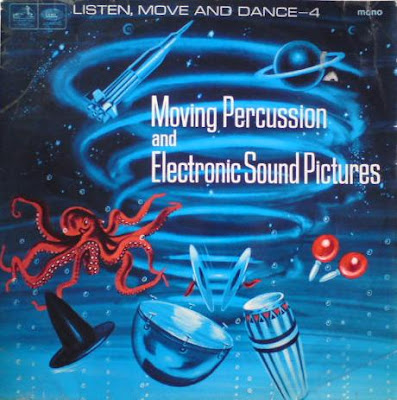 More of those nascent British electronic sounds that time forgot. From the same series of 'Listen Move & Dance' records that spawned Daphne Oram's only known vinyl releases. These records were designed for 'stimulating the imagination in art and craft and creative pursuits in the classroom'. Yes, they were designed for children, by a lady called Vera Gray, back in the crazy '60s. Always hoped I'd come across one of these, but never dreamed I'd find one for a fiver in reasonably good condition.

Side one featuring 'Moving Percussion' - all manner of percussive sounds and rhythms from Latin through to African, glokenspiels, vibraphones, timpanis, gongs etc, etc. Very nice indeed. But then side two, 'Electronic Sound Pictures', is a collaboration with Desmond Briscoe (joint founder and head of the Radiophonic Workshop) featuring the most bizarre selection of electronically generated and treated sound (quite possibly recorded at the Workshop after hours) that would surely have made children piss their pants in terror rather than inspire them to bust a few moves. Not so much a forgotten element of British post-war culture - more like some mad parallel universe shit that I wouldn't believe ever really happened if I wasn't holding the evidence in my hands.

Did I say 'forgotten'?