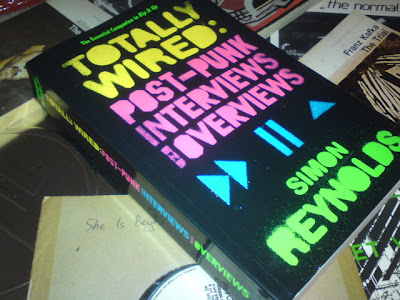 The first essential music book of the year has (almost) arrived. Having already caused a minor stir with "Rip It Up", his definitive guide to the post-punk era, Simon Reynolds follows-up with the essential companion: "Totally Wired: Post-Punk Interviews & Overviews" (Faber & Faber trade paperback).

As the title suggests, the main bulk of the book comprises in-depth interviews with some of the key figures in the scene, culled from the copious and exhaustive interview tapes used to research the first book, which never fail to be anything less than fascinating. Simon talks to many central characters, like Jah Wobble (PiL), Ari Up (The Slits), Green Gartside (Skritti Politti), Andy Gill (Gang Of Four), David Byrne (Talking Heads), not forgetting a few of my own personal heroes like Alan Vega (Suicide), Richard H. Kirk (Cabaret Voltaire), Phil Oakey (Human League) and Mark Stewart (The Pop Group). It was also a surprise and pleasure to see a few of the 'backroom boys' getting some attention, seeing things from the perspective of producers Martin Rushent, Trevor Horn and UK dub pioneer Dennis Bovell (of course Martin Hannett is no longer with us, but we peek into his working methods care of Factory boss Tony Wilson and Joy Division's Steven Morris). The late John Peel and writer/critic Paul Morley also feature.

Among the many highlights: Simon wrestling (figuratively!) with 'difficult' interviewee David Thomas (Pere Ubu) - a man with some frankly bizarre opinions and theories about music - and Devo's Gerry Casale describing in harrowing detail his eye-witness account of the National Guard shooting students at a demonstration at Kent State University in the early '70s. It's also interesting to note the recurring themes - almost everyone involved seemed to have come from an Art School background, almost everyone was a voracious reader (Penguin paperbacks were as de rigueur as records and trench coats!) and people like Bowie, Eno, krautrock and The Velvet Underground crop-up regularly as formative influences.

The 'Overviews' section contains a selection of previously published reviews and articles that touch on aspects of the post-punk milieu, the most essential of which must surely be "Mutant Disco And Punk Funk", the 'non-oral history version' of the 'NYC No Wave' chapter of Rip It Up that only appeared in the US edition originally (and incidentally, No Wavers James Chance and Lydia Lunch also get the full interview treatment). Finally, Simon Reynolds himself is interviewed, discussing definitions, inspirations and personal experiences/observations from the era, which is fascinating in its own right. I was particularly taken by his lucid invocation of the levels of boredom experienced by young people in the late '70s, deprived of so much of the music and media stimuli that we take for granted today everytime we log-on, and hence explaining the pivotal role of the music press during that time, which was still very tangible when I started reading the inkies in the mid-80s. Overall you really begin to appreciate the unique circumstances of the period that, as far as I can see, will never be repeated, and which gave birth to such a crucial swell of vibrant music and culture.

Totally Wired will be available from 5th February (pre-order at Amazon). Simon Reynolds will be in the UK to promote the book from 13th February, including a special event at The Roundhouse in Camden at 8pm on Sunday 15th, where he will be in conversation with a few post-punk legends.

In the meantime, keep an eye on Simon's new Totally Wired blog for updates and additional info.
Posted by N.E. at 5:53 PM