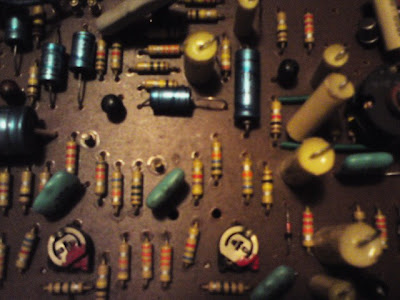 ...of my Farfisa Rhythm 10. This was the sort of technology required to spit out a basic tango riddim back in the '70s. You could actually make it play two different riddims at once, thus creating variables by combining say, 'Slow Rock' with 'Bossa Nova'. Then send the output through an echo and a VCF and things start to get interesting. That's how groups like Cabaret Voltaire started out, anyway. You ever heard that brutal hissy thud that propels the Cabs' cover of "Here She Comes Now"? That's a Rhythm 10 in action.

The problem with my machine isn't with the circuits, its with the power supply, which is knackered. I managed to briefly revive it a few years back by experimentally poking around with exposed 9v wires. Took me a while to make the right connection, but then there was a crackle, a spark and then a clunky cha-cha riddim kicked into life and thundered out of the amplifier. I managed to record a few things before it died again. Actually there's quite a few examples of this baby in action in my tape archive. If I thought for one minute that anyone out there gave half a shit I'd upload a couple of bits. But I don't, so I wont.

Still, I keep thinking it would probably be a fairly simple job to build a new power supply and get this beast back into active service. Not by me, though. I can't build or solder electronics for shit. But maybe if I can find somebody local with the necessary skillz...

In other news: RIP J.G.Ballard. I read a few of his books. I liked most of them. Especially High Rise. Though if I'm honest I found The Atrocity Exhibition a bit hard-going.

Of course, I first heard the sad news via BBC News' Twitter update. Then I started wondering what would be a respectful period of time to leave it before 'unfollowing' JG_Ballard on Twitter, because, somewhat naively, I assumed that it was actually the great man himself. I mean, why not? There's bloody loads of (semi)famous people twittering like maniacs now, and I could almost imagine Ballard getting a kick out of Twitter. But then JG_Ballard sent an RIP tweet to himself, which kinda gave the game away.

I love Twitter, for nearly all the same reasons that Doppelganger doesn't. But then, if I love the 'dissected consciousness' of it so much, then why don't I like The Atrocity Exhibition? Hmm...maybe I need to re-read it. Maybe it'll make more sense now, along with Naked Lunch. I mean, I always liked the idea of the 'cut-up' technique, but it only really worked for me when applied to audio (as with Cabaret Voltaire's Burroughs-inspired sonic collages). When I'm reading a book, I generally get on better with a clear narrative, which is why I enjoyed reading something like Junkie more than Naked Lunch. But with Twitter it's like this live cut-up happening in real time - a non-hierarchical stream of info where 'important' events like Ballard's death rub shoulders with ludicrously mundane facts, like jrowett burning his lunch earlier today. I'm trying to get all my mates to get on board cos I think it's the best form of social networking I've seen so far. But a lot of people just don't seem to 'get it'. Or they're too busy piddling about with all their wanky Facebook apps. Or, maybe, they've got a 'real' life.
Posted by N.E. at 11:32 PM