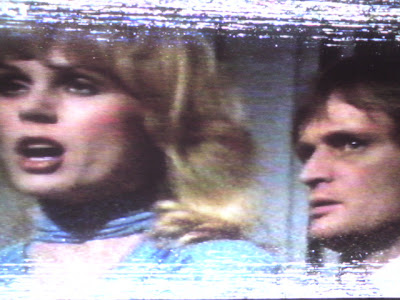 It's the pace of the thing that I find so fascinating. Due to budget restrictions, every storyline unfolds very slowly, typically stretched over six 25-minute episodes. Events occur at a magnetically slow pace, in a scenario where, funnily enough, Time itself is supposedly the 'villian'. Special effects, supporting characters and scene-changes are kept to a bare minimum - everything is held together by the rivetting on-screen presence of lead actors Joanna Lumley and David McCullum. The complete absence of spectacle imbues everything with an eerie stillness, which makes the occasional action sequences even more startling. Special mention must also go to Cyril Ornadel's incidental music. Arranged for a small ensemble of musicians (predominatly woodwind) with liberal use of electronic treatments (ring modulation, echo/delay) to intensify the drama and suggestion of horror, Ornadel's cues are far more powerfully chilling and evocative than anything you're likely hear in the mainstream media today.
Posted by N.E. at 10:04 AM