A couple of links sent my way earlier today - Jan Jelinek's 'radiophonic' hoax album (via Bob) and a Conny Plank podcast (via Matt) - converged in my mind and sent it flashing back to a little-known krautrock-inspired hoax album entitled Auf Die Mond! I always assumed it was a hoax, anyway. Promotional cd-r copies were floating around in 2001, yet when I googled it I couldn't find a single reference to it's existence! Hard to believe, I know, but somehow this particular item has managed to remain undocumented on the web...until now. 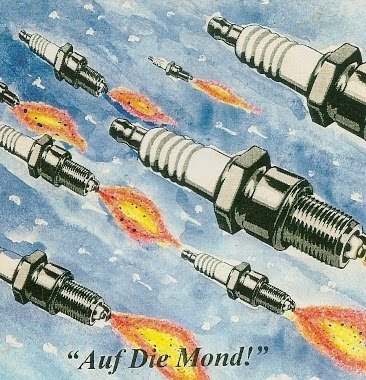 After a good deal of searching through mountains of dodgy old promo CDs, I finally found it. The sleeve notes, written by one Clifford Snouts, claim that the master tape for this 'forgotten krautrock gem' was discovered by a retired German recording engineer in a filing cabinet. The album, by an unknown artist/group, was apparently recorded in late 1974, possibly in Hamburg. Stylistically, the music recalls Kraftwerk circa Ralf & Florian, although the title track is clearly endebted to Neu! But perhaps the closest overall comparison would be with Cluster, as the music veers between the formless dronescapes of Cluster II and the naive cyclic melodies of Zuckerzeit or Sowiesoso. 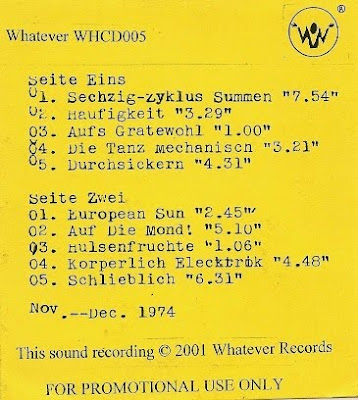 Now I'm not usually one for wholesale filesharing, but on this occasion I've decided to share the entire release with you, dear readers, complete with reproduced sleeve notes. Afterall, this is one of those weird little forgotten electronic projects that is so obscure that the chances of anyone actually finding a copy are practically nil. Plus I'm almost hoping it's creators might spot this and get in touch to solve the mystery of it's origins once and for all.

As I said, I'm pretty sure this must be a hoax, but it's still an enjoyable and quite authentically retro-analogue listening experience, full of filtered rhythm machines, Farfisa organs, backwards guitars and clunky hand-played monosynths.