There's some fresh Richard H. Kirk product on the horizon, which is Big News here at Gutterbreakz. In anticipation of some major critical appreciation of the Kirkster's work, here's a reprint of my review of Kirk's appearance at 93 Feet East last year. This was originally posted at the Cabaret Voltaire Yahoo Group (love to Pat and the rest of the Cabs crew).

Here's a report on Richard's gig at the Mute Irregular night last night. I'm posting it now while my memory's still fairly clear.

Everything was conspiring to ruin the evening for me: I got delayed leaving home, got stuck in tailbacks on the M4 and had to face some truly horrendous grid-lock traffic shit in central London (I'd heard that the traffic thing had been getting really bad in London recently, but was totally unprepared for the sheer magnitude). Not knowing my way around too well, and with no navigator, I eventually got near Liverpool Street station, ditched the car and started running, as by this time it was gone 9 o'clock. Then there was the queue at the door to deal with. Eventually I got in, grabbed a bottle of Sol at the bar and went into the venue. Appliance were on stage and they sounded great, but my main concern was to establish whether or not I'd missed RHK. I approached a lady stood behind the mixing desk:
Me: Has Richard Kirk been on yet?
Lady: Oh he's playing upstairs
Me: UPSTAIRS?! There's an upstairs too?
Lady: Yeah. And he's due on stage (looks at watch) uh....NOW!
Me: Shit! Okay thanks. (begin moving away)
Lady: NO! It's over THAT way (pointing)
Me: Oh right. Thanks!

So I rush through a door and up a flight of stairs. As I ascend them I can hear a nasty drone noise emanating from above. That's Richard, I thought.
I enter the upstairs room, in which a respectable crowd has gathered. Over the tops of the silhouetted heads, I see mangled, grainy video images projected against the wall behind the stage. I work my way near the front and find a decent spot near the speaker to the right of the stage. The guy next to me confirms that Richard's show has only just started. Talk about split second timing!

So now I can concentrate on enjoying myself. This is what I saw and heard... 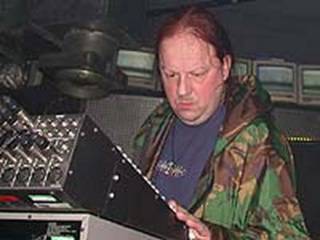 Richard was stood there over his machines, looking like an ancient techno Yoda, staring intently at his equipment, seemingly oblivious to all around him. The music was basically strange noises at this point: vast echoing torrents of white noise and radioactive static. Eventually a muffled tribal rhythm begins to emerge from the chaos then gets loader...then the hi-hats come in...then the snare and suddenly bang! the groove kicks in. I noticed that a few die-hards down the front were actually dancing and then I noticed that I was sort of moving around a bit too. Despite the fact that there were no melodies or riffs to speak of, Kirk has a way of tapping into those primal rhythms, like an electronic shaman drawing us into a 21st century mantric ritual. The sound was incredibly dense by this point: fresh waves of searing noise joining the beat in unholy matrimony. Occasionally Kirk would step back, light a fag or take a quick slug from what looked like half a pint of bitter (1). Just once I saw him furtively glance up at the crowd...possibly to check if we were still there.
Now the beat is joined by fresh cross-rhythms and a few ethnic vocal samples. Occasionally Kirk plays his trusty Juno 106 synth - but only as an additional noise-generator. For the gear-heads out there, Kirk had a little box which I recognised as an Electrix Filter Queen which he was using to mangle the music to amazing effect. He'd use it to sweep through the frequencies of the hi-hats for some totally out-there sounds.
After about 20 minutes of this, Kirk goes into an uptempo thing which was a little different to the usual stuff. Hard to describe it, but I remember thinking "Wouldn't it be great if he picked up a mic and started singing 'Martyrs Of Palestine' (2) over this", which maybe gives you some idea of the vibe.
Then he looked at his watch, rummaged through his box of floppies, loaded up one more track...which started out like Suicide: a jackhammer amphetamine kick drum. Then more noise/echo/static etc. This was totally uncompromising stuff, industrial dub I guess you'd call it.
And then, after half an hour it was over...as the last shards of sound decayed into the night the crowd cheered their approval. I felt compelled to shout "MORE NOISE!!" a couple of times, but alas my plea went unheeded. Kirk seemed a little self-conscience as he stood back to receive applause. Then he went and sat down on the side of the stage....about 3 feet from me! Before I knew what I was doing, I leaned forward to shake his hand. Below is a rough transciption of the brief conversation that followed:

I know you're all thinking "Why didn't you ask this or this blah blah blah...." and there's loads of things I wanted to say to him but it's kinda crazy in that situation with people all around you and being completely star-struck. I'm just glad I didn't outstay my welcome. So I slumped on a stool by the bar and watched him pack his gear up. Then he wondered off carrying a couple of flight cases and I didn't see him again. Then I just felt incredibly exhausted. After all the tension of getting there, having my senses assaulted by the awesome sound of RHK live and then actually meeting him I was just physically and emotionally drained. So I had a Red Bull which sorted me out a little, lit a fag and wandered downstairs to watch Echoboy. After a while I realised that I was standing next to Mute supremo Daniel Miller (I'd missed his DJ set unfortunately and Chris & Cosey's too). So I got to have a little chat with him too.

That's about it really. I quite enjoyed Debasser's live set. I'd never heard of the guy, but I found his brand of stripped-down dubby techno quite appealing (though compared to Kirk, it was like watching Top Of The Pops). One to watch out for, maybe...

I didn't bump into any other Cabs Group members, unfortunately. Hope you had a good time too Clive and others(?)

Hope you enjoyed reading about my experience. But Christ, I hate London. It'll take a Cabs reunion to get me down there again!(3)

(1) Other reports suggest he was drinking red wine.
(2) 'Martyrs Of Palestine' is a bizarre electro-punk track from Kirk's 1986 album Black Jesus Voice, containing the lyric "Martyrs Of Palestine/High On Amphetamine". The track that I was comparing to it is called "I Got Weapons", which subsequently appeared on Kirk's Bush Doctrine album, released earlier this year under the pseudonym BCD/Biochemical Dread. This track sees Kirk bringing back a little of that punkoid-guitar-thrash mentality that prevailed during the Cabs' early Rough Trade period. He's also done some remixes of the Cabs classic "Nag Nag Nag", which follow a similar path....

(3) In fact, I was in London again quite soon after, to see Suicide. This time I got wheel-clamped. Christ, I really fucking hate London!!
Posted by N.E. at 2:53 PM