CASSETTE PETS: REMEMBER A TIME WHEN THE NME WAS ACTUALLY EDUCATIONAL....? 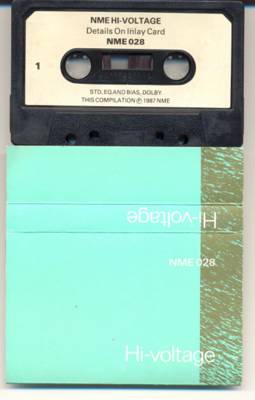 Hi-voltage (NME 028)
Oh. my. god. This compilation was available by mail order only from the NME back in 1987. Totally blew my head off.

Amazing to think that, apart from the Depeche one, I'd never heard any of these tracks prior to receiving the tape. Even the Cabs one, which at that time was still only available on the ultra-rare "Factory Sampler" EP. There's a couple of things on here that still warrant further investigation, such as Matt Johnson's pre-The The experimental piece, which is from an album called "Burning Blue Soul" (4AD, 1981) which to this day I still haven't gotten 'round to tracking down. On the strength of this track, it must be blinding. If anyone out there can supply me with a cd-r burn, I'll be eternally grateful.

Compiled by Roy Carr & Ian Pye, this was my first taste of Suicide (I think I bought their just-reissued first album immediately afterwards), Neu!, Can & Thomas leer, as well as my first hearing of Soft Cell's early 'prescient-as-fuck' single "Memorabila".

Of course, being the wisened old know-it-all that I am now, I'm thinking about all the stuff they missed out. I mean, did we really need to hear current chartpop by Erasure when we could've had Cluster, SPK or Metal Urbain? But at the time...christ, it was like peering into a whole hidden history of music that I was only just beginning to comprehend. NME, I salute you for what you once were...
Posted by N.E. at 11:36 PM