THE ACTION-PACKED AMENTALISTS BRING YOU THE FUCKING GEMS 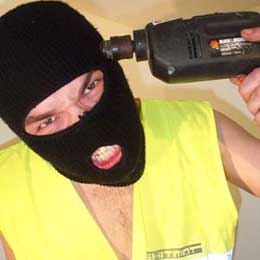 I've been meaning to write this one for months, but John Eden's recent post finally gave me the impetus to knuckle-down and get it out of my system...

There's a type of music that's been really exciting me over the last year or so. Not so much a 'scene' in the regional sense (although I suppose it centers around the London area), more a general aim of totally jaw-dropping gabba/jungle kinetics that I, from my remote suburban hilltop viewpoint, like to call "Amentalism"(nothing to do with Islamic fundamentalism, of course). I like to think that Squarepusher was the first Amentalist. When he burst on the scene in '96, his take on mashed-up breakbeat science, inspired by the original Junglist's like Remarc, seemed to buck the general trend towards 'smooth 'n rollin' in the Drum 'n' Bass scene of the time - a dancefloor-unfriendly riot of convoluted, fragmented breaks that, from the outset, seemed determined to rinse as many new possibilities from the 'Amen' break and it's ilk as possible. Then last year Luke Vibert released a series of five EPs for Rephlex under the same Amen Andrews, which got me going again on the Amental trip and, combined with Planet Mu's Remarc anthologies, got me really starting to want to hear that type of grainy, insane hyper-funk racket again. Whilst this will no doubt be old news for some, here's a selection of tracks for the curious consumer...

From Amentalism's first 'concept album', where every track utilizes the 'Babylon Boy' sample. Shitmat has an even more irreverent attitude to sampling than Vibert! A true kleptomaniac, he's quite happy to throw in bits of The Stranglers, Ace Of Base, Michael Jackson, Survivor's "Eye Of The Tiger" and the theme from "Rainbow". Maybe this might wind-up some of the 'purists', but I find it all very endearing. "Tuff Babylon" is the most Gabba-flavoured offering - an overstimulated headlong speedrush that'll have you chuckling in amazement, especially when 'Golden Brown' makes an appearance...

Although I sometimes think that Kid 606 is just a skilled copyist, hanging-on to the creative shirt-tales of Squarepusher, Aphex Twin et al, I must admit he's made some remarkable records over the last few years. Effortlessly moving through jungle, electro, hip-hop and IDM -often in the course of one track - San Franciscan Miguel Trost-Depedro is a jack-of-all-trades and master of most. Here he lays down one of his fiercest Gabba riddims, adding dynamic spurts of Amen-intoxication that'll almost certainly give you a cardiac if you even attempt to dance to it.

DJ Scud's Ambush crew are purveyors of some of the most violent, aggressive and downright nasty shit I've ever had the pleasure of being assaulted by. "Bodysnatcher" is like the next stage on from 'panic-attack' Jungle - a dense, nightmarish world of blood-curdling screams, white noise riffs and head-staving artillery beats that should not be fucked with when under the influence of mind-altering drugs. These records should come with 'health hazard' stickers. The horror..the horror...

Although they're probably the quintessential 'Ragga-jungle' act, "Fathom" is from another place entirely. It's a total fucking vortex of hemorrhaging Amen stutter-beats, foreboding atmospherics and ghostly 'Mentasm' stabs that gives me the shivers everytime. Apocalypse, wow!
Posted by N.E. at 11:39 PM