Another cool MP3 blog: Radio Babylon. Not least 'cos he calls himself 'Blue Calx' or the fact that he's been bigging-up Luke Vibert recently. He's also brought to my attention the imminent release of a new Aphex Twin 12 inch called Analord 10 (I really should check in at Rephlex more regularly!). My own reactions to this lush vinyl package are pretty much exactly the same as Calx's, so over to him:

The good news about this speaks for itself. The bad news, it's only available as 180g Audiophile vinyl, which means that the sound quality should be fantastic, but it will probably also be expensive. And for only two tracks too. It's also packaged in a binder which will also hold future editions of the Analord series. As nice as the idea sounds, it'd be nice to get them all put together on one CD, wouldn't it? The unfortunate thing about Aphex Twin is that he's gotten quite good at making money lately but he's also talented enough to get away with it. So depending on how much he's looking for for this result (the line "Price: t.b.a." seems like a bad sign to me), I'll probably end up springing for it anyway. Of course there's also a bit of debate over the title "Analord." Despite the fact that it's also the name of a Wagon Christ track, is it a reference to the fact that these tracks may be refined versions of the back catalogue of his old analog work? Or is it... well I'll leave it your imagination. Considering this is Aphex Twin, I'm going to guess that it's a little of both.

Indeed! I'd also add that it's nice to see that James is now free to use his beautiful Aphex logo wherever he darned well pleases since freeing himself from his Warp contract. You all know by now how much I love Warp (DVD is in the post, btw!), but I got the impression some time ago that James wasn't happy there, so it's best that he does his own thing now. "Analord' does indeed give out a coy suggestion of 'analogue', which I find intriguing. But I don't believe for one minute that James has reverted back to his roots in soldering irons and voltage control. Once you've made the move to software, there's really no going back. But perhaps he's using his Powerbook to emulate the sound of his analogue recordings? I hope so!

I cherish the sound of those early Aphex releases. He really was a total breath of fresh air when he first went overground in '92. Like nothing else around. And such an advanced mentality towards sound, that had Simon Reynolds making John Cage comparisons at every opportunity. The fact that his equipment seemed to consist of all this junky homemade or modified gear was equally mindblowing. One of the greatest gigs I ever attended was this one: 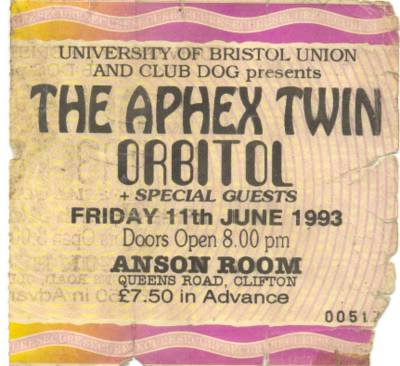 Of course I enjoyed the spectacle of Orbital, who were just starting to hit their stride as a shithot live experience. Yet when James came on stage, it was like some distopian Steptoe & Son-meets Blade Runner-type scene. All you could see from the audience was the crown of his head, just poking out from the top of an unfathomable pile of circuit boards, ancient TV monitors, keyboards that looked like they'd been ripped open and their guts splayed out. To us it looked like a heap of scrap, but it had grown organically over many years and James no doubt knew exactly where every crocodile clip was supposed to be placed. Like some H.R. Geiger biomechanical nightmare, James seemed fused within all this electronic garbage - truly, man and machines in perfect symbiosis. 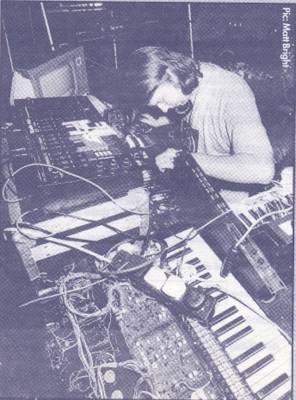 And then there was the sound of those crazy gadgets. Percussion sounds beyond anything yet experienced by mankind. And the reverb-laden patina of otherness that pervaded his analogue recordings. No matter how intricate his laptop programming becomes, that sense of environment seems to have been lost in his digital work.