KICKIN' AGAINST THE PICK-UPS 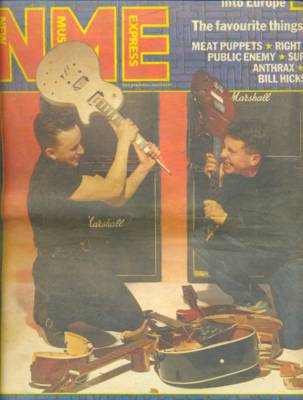 Jez Varley: "We thought we'd do it for a laugh. It'll probably wind up the sort of indie band that hates dance, though." 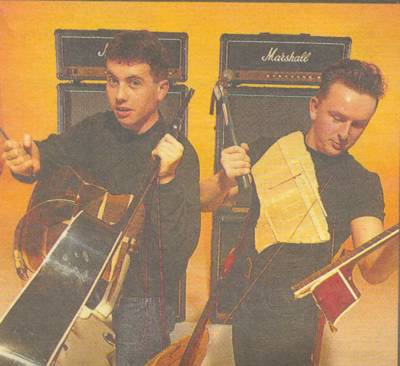 Axes to grind: Jez Varley (left) and Mark Bell indulge in some serious Rock-Deconstructivism
Varley and Bell were teenage ravers at clubs where the DJ's were members of Nightmares on Wax, the cult Leeds House-hip-hop production team. They gave Nightmares on Wax a demo of a House track they did on a tiny Casio SK-1 keyboard and candle-powered drum machine. The track got played at the club. The crowd loved it, and among the crowd were the guys that own Warp Records. Within a month 'LFO' by LFO was out on Warp.

Now, two singles and an album ('Frequencies') later, LFO are among the electronic elite.

Ask them if they're ever tempted by anything that isn't electronic and the names they come up with are Brian Eno and Pink Floyd. "One of my friends," muses Mark, "likes Metallica, Slayer and Megadeath, and he likes Techno. It does make you wonder..."

Wonder what? Wonder if Techno is the new Metal rather than the new punk? Sling a few simple Metal riffs together using a computer and you've got a House record? Nah, it doesn't seem possible. But LFO have bigger things to worry about, like the 'new' 'live' TOTP, which, they reckon, has been engineered to make dance music look crap. And that's not all.

Alright!! LFO are spearheading a joint assault on the Rock and Corporate establishments (which, let's face it, are pretty much entwined anyway). Go get 'em lads - your generation needs you! 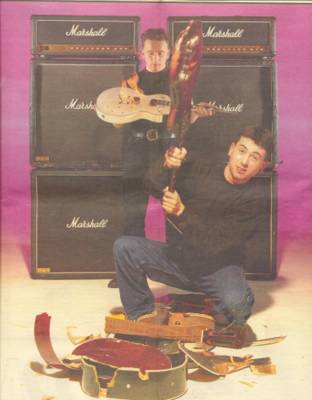 Burn, Babylon, burn!
But wait a minute....this all happened over a decade ago, in January 1992. So what the fuck happened?! How did we allow the trad-rock bollox of Oasis, Travis and The (wretched) Darkness to flourish once more? Why is Jack White an international superstar when the real voice of Detroit youth - Jimmy Edgar - still languishes in relative obscurity? Why is it that the charts - once under siege from an unstoppable deluge of smash'n' grab independent dance labels - are once again dominated by the major labels and their foul 'pop idols'? Why are LFO's subsequent sporadic releases only listened to by a smallish community of die-hards, when their first three singles all invaded the charts?

Everyone's a winner, baby: the LFO entry in the Guinness Book Of Hit Singles
Amazingly, from just three singles/EPs and their remix offshoots, it's possible to compile a whole new album's worth of material from that classic era. Below is my suggested tracklist and running-order which you can use to create your own Singles/B-sides 90-92 CD-R. As this is intended as a companion to Frequencies, I have left out Mentok 1 and the standard mix of We Are Back as they are identical to the album versions. Tracks highlighted pink are available to download from Bleep. Disgracefully, none of the other, mainly vinyl-only, tracks are on-catalogue at all. Those in yellow are available to download courtesy of Gutterbreakz. I would've put them all up, but I'm conscious of bandwidth restrictions. However, the remaining tracks are all in my shared folder on Soulseek. Please take them, burn the CD-R, then pass copies to your ten-year-old nephew and so forth. There's still time to save The Kids before the system sucks out their brains forever! It's a question of Cultural Survival!

7. NURTURE
(different from the album version)