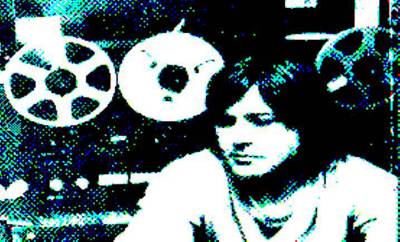 In October 2002, whilst watching Echoboy performing live at 93 Feet East in London, I literally bumped into Mute Supremo Daniel Miller, as he was standing next to me in the audience. A small exchange ensued, with the conversation eventually focusing on Miller's one-time friend and collaborater, Robert Rental. Daniel informed me that Rental had died of lung cancer a couple of years earlier. I was so stunned by this information that I forgot to ask Daniel perhaps the most burning question I had concerning this most enigmatic figure, namely: why did he stop making music?

There's so little documented about Rental's brief career. A google search will throw up lots of brief mentions, the odd obituary...but little else. One such mention can be found at Brainwashed, which includes some clips of Rental's work which I've linked to individually in orange throughout this post - I'm sure they wont mind! I've loved this man's music for so long now, yet know virtually nothing about him. Without any interviews or decent biographical info to draw on, it's impossible to truly understand his motivations for creating music or indeed why, after just three years of recording/performing he suddenly went AWOL. His close association with Miller would surely have provided him a 'job for life' as a Mute recording artist, even if he had only been a marginally successful figure on the label's roster. Perhaps the answers might lie in an obituary that Miller wrote for Throbbing Gristle's "24 Hours" (but I never had the cash to buy it!) or maybe Simon Reynolds might've addressed the matter in his new book. If anyone out there knows the answers, please contact me...

What I do know about Rental is this: he was Scottish, but moved to London in the wake of Punk to form a shortlived band with his fellow countryman Thomas Leer; then an interest in Krautrock and experimental tape music quickly led to a move towards electronics. In 1978 a triad of pioneering solo DIY singles by Miller (T.V.O.D./Warm Leatherette - as The Normal), Leer (My Private Plane/International) and Rental (Paralysis/ACC) arrived on the scene, with a common aim: self-recorded, self-financed, with a loose manifesto that Miller summed-up recently as "the idea that electronic music was the real punk rock, and that punk rock was really just pub rock, sped up". Musically, each found their own particular means of expressing this approach. In Rental's case this resulted in what is, for me, one of the most fascinating artifacts of the Post-Punk era.... 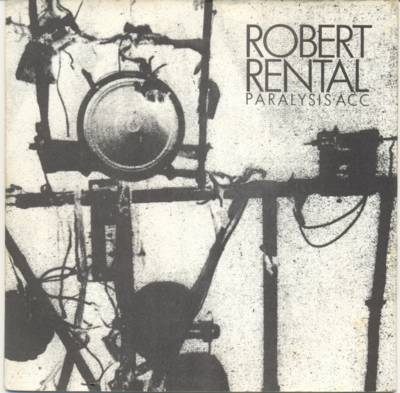 Actually, this release has some links with Rock tradition like the hazy, messed-up, fumbling confusion of acid casualties Alexander Spence and Syd Barrett. But really, there was nothing else comparable to this in the singer-songwriter tradition. Rental sounds like he's been buried alive under a huge slab of compression and ectoplasmic synth-screech. Occasionally his fragile, wounded vocals attempt to rise up out of the melee..."can you feel a little heart beat?" he implores, before wringing his own voice through the sonic mangler. His taught, angular, treated guitar lines slice through the mix like hot knives...it's a real emotional explosion of nameless longing that eventually leads to a coda that sounds reminiscent of some of Suicide's early demos or Joe Meek entrenched in a black cloud of depression. The B-side 'ACC' is a more uptempo piece with chugging guitar riffs and a soaring Meek-like lead synth. I think this is probably one of my favourite singles ever. 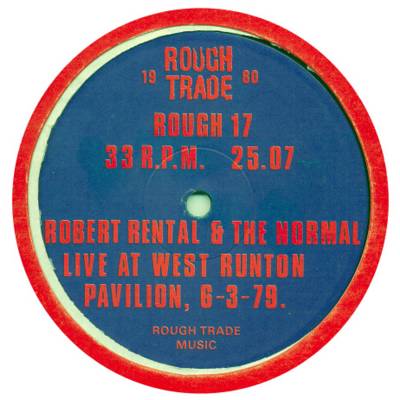 Rental teamed-up with Daniel Miller to perform live during the Spring of 1979. The only known document of this is a recording from a sleepy seaside town on the Norfolk coast, released on a one-sided LP by Rough Trade the following year. Musically, Rental appears to have deferred entirely to Miller's more purist approach - an uncompromising sound generated entirely using synthesisers. As a live vocalist he appears to be a very different animal: the soft, indistinct slur of his studio recordings replaced by a harsh, urgent, monotonous growl - seemingly galvanised into righteous anger when performing his art on the battlefront of the live stage (and let's not forget what an uncomfortable place that was for electronic groups at that time).

It's worth noting at this point that one of the crucial factors in triggering the late-70's rise of independent electronic groups was the growing availability of low-cost monophonic synthesisers. Whilst the established Rock groups of the era were using more expensive American synths from Moog, ARP and Oberheim, the post-punks were picking up cheaper alternatives from places like Japan. The Human League bought Roland gear. Daniel Miller started with a Korg. Rental went for a British synth called The Wasp, which at that time was available for an unbelievably cheap £199 on account of it's lightweight cost-cutting design and non-moving keyboard. The thin, buzzy sound that these instruments generated was in sharp contrast to the fat, warm tones of the Moog. Their clammy, alien(ating) textures helped define the New Wave from the establishment as perfectly as any confrontational polemic. Rental and Miller's combined Korg/Wasp onslaught still sounds pretty fucking intense now. There's an interesting interview with William Bennett here, where he briefly recounts his time on tour with Miller & Rental, with his first group Essential Logic. Apparently, Rental subsequently sold his Wasp to Bennett, who then used it as the basis for devising the sound of his next group, the quintessential '80s noise group Whitehouse.

Another luminary of the era who was impressed by Rental's Wasp was TG's Chris Carter, as he recounted in a retro-review for Sound On Sound magazine: "The first time I heard the Wasp was in 1978 while I was with Throbbing Gristle and Industrial Records, and happened to hear some demos by Robert Rental and Thomas Leer. They were writing very individualistic 'electronic' songs using just voices, guitars and two Wasps. The Wasps supplied all the keyboard and percussion parts, and we were amazed at the sound they were producing with these, especially as they were using no drum machines (I think they may have used a Spider sequencer). We signed them to our label and released their first album, The Bridge. I was so impressed by what they had achieved that I went out and bought a Wasp of my own." 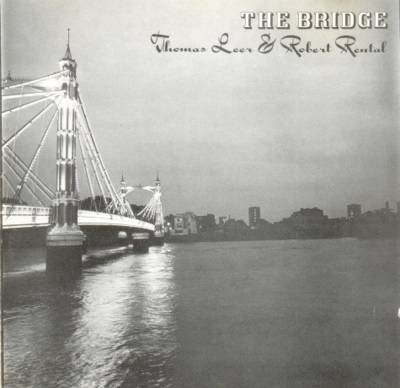 Thomas Leer & Robert Rental - The Bridge (Industrial Records, 1979)
re-issued by (and available to purchase from) Mute Records in 1992

Over a two week period in the Summer of 1979, armed with an 8-track recorder on loan from Industrial Records, Leer and Rental developed their demos into one of the greatest home-recordings of the era. Like a lo-fi alternative to Bowie's "Low", "The Bridge" is an album very much of two halves. The first side being song-based, the other abstract and ambient, for reasons explained by Thomas Leer in the re-issue's sleeve notes: "Robert wanted songs and I wanted a pure ambient album. I thought back then that the idea of the song was dead and the future belonged to instrumental music. Voices could be used, but not in a structured way."

The MP3 clip of "Interferon" gives a hint of the eerie, twilight world of wraith-like drones and loops that Leer and Rental created for side 2. Leer explains further: "We were doing the same kind of things Eno started with his Discreet and Ambient musics, but we were trying to take it a stage further, away from his prettiness. We took his technique and applied a harder, nastier edge to it."

The 'song side' proved to be a fruitful collection of electronic pop possibilities. The more forthright Leer takes the lead vocal in most cases, as on killer opening track "Attack Decay", with Rental providing the scorching noise-guitar blasts. I've selected "Day Breaks, Night Heals" because it's the only track where Rental takes the lead, although much of it's appeal is in Leer's superb synth sequence. 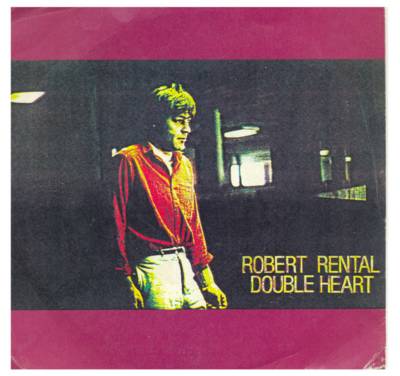 At the time it must've seemed that Rental's first release on Mute Records, with it's higher production values, was the beginning of a whole new exciting chapter in his career. But it turned out to be the final act. Recorded at Blackwing Studios in August 1980, Daniel Miller - with in-house engineers Eric Radcliffe and John Fryer - seemed determined to groom his friend for the big league, enlisting the services of D.A.F.'s Robert Gorl to play live drums and adding a bright production sparkle lacking in the murky home recordings of the past. On "Double Heart", Rental's economical bass and synth lines are augmented by uplifting piano flourishes from Thomas Leer. Yet set against this comparatively lush backdrop Rental seems frozen in the oncoming headlights, his voice too soft and reserved to project the necessary charisma required for pop crossover. Yet his performance retains an understated charm and quiet determination. Perhaps the line "If there is anything that I could be/I would be close to you and we would be free" hints that Rental was already aspiring to personal goals beyond the confines of a 'pop' career.

"On Location" is a much more dramatic piece - stark, tense, urban blues - a Ballardian nightscape of 'corrosion cars' and 'orange glow street lamps'. On the sleeve Rental is like some nocturnal character from a Scorcese movie - clearly an illustration of this song's theme. Alone in the streets he confronts his own desires caught in a passing car window reflection - "foot falls, heads turn, eyes meet/synchronised faces explode simultaneously..." - leading to a blood-curdling scream of horror (or elation?). 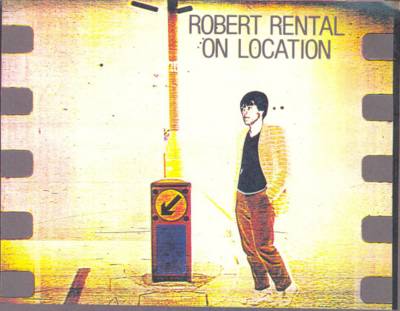 Whilst other left-field artists like Frank Tovey, Boyd Rice and Nick Cave were able to thrive under the artistically-driven ethos of Mute, Robert Rental, for whatever reason, decided that his future lay elsewhere outside the music biz. These four documents are all that remain of his brief non-career. For these at least, we should be thankful. Rest In Peace...
Posted by N.E. at 11:44 PM