MAY THE BLEEP BEE WITH YOU... 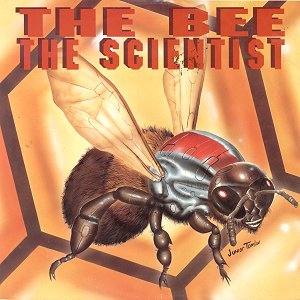 I stumbled over your Blog and, well, I think you are my doppleganger.
I too have a large collection of tapes (including that Detriot Techno tape), I
too include Scientist's The Bee as an all-time classic (although I'd have to go
for one of the remixes) and I too am obsessed with Breaks, Bass'n' Bleeps

This comes from an ex-pat Brit who now works as an R&D Programmer for Sony Computer Entertainment America. Once more the internet brings kindred spirits together, though they may be an ocean apart.

The Scientist was Phill Sebastiane. The groundbreaking breakbeat-orientated music he created (with large input from DJ Hype) for Kickin'Records set the tone for Rave's second wave. Hype's hip-hop instincts, combined with Phill's assured synth-programming, on tracks like "The Exorcist" and "Champion Sound" (as Kicksquad) were the template for the early-nineties Jungle/Darkside explosion. I remember being incredibly excited by it all, and those Scientist tracks will always have a special place in my heart. Phill later went on to work as Pure Science.

MP3: The Scientist - The Bee

Although the more famous "Exorcist" tune was helping to push the BPM's higher, I actually prefer The Bee's stealthy, mid-tempo vibe. Looking back, I can't imagine what user-value this tune would've had for the E-heads, other than freaking them out with those bee-swarm samples. It's spacious, vaguely ominous atmosphere seems at odds with the rest of the Kickin' output of the era - hardly a recipe for 'bliss-out'!

I couldn't seem to find a copy of "The Bee" on vinyl or CD in my collection (thought I had - but never mind), and a quick Soulseek search proved surprisingly fruitless. So I've encoded this one from my trusty old "Best Of Kickin' Records" tape, which feels quite appropriate in this instance - a celebration of me and Sony-man's love of the music and the format. The sound-quality is surprisingly good, mind!