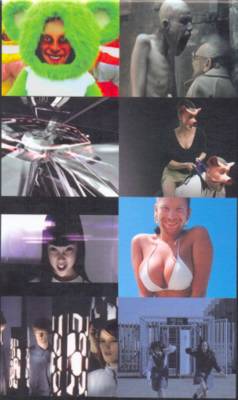 If you're looking for a definitive view of developments in video art over the last fifteen years, here's a good place to start.

Naturally, the work of Chris Cunningham dominates this collection, the earliest example being Autechre's "Second Bad Vilbel", from 1995. Chris was already pushing his fascination with robotics and 'distressed' visual effects here, but his real genius lies in his ability to lock into the rhythm so precisely. The promo for Squarepusher's "Come On My Selector" still looks remarkable - Cunningham's hyperactive editing skills in perfect concord with Tom Jenkinson's skewed art-jungle classic.

But there's plenty of other quality directors on show here: Daniel Levi's bizarre Chinese schoolgirls misbehaving in the playground to the soundtrack of LFO's "Freak", Laurent Briet's magical music-box accompaniment to Aphex Twin's "Nannou", Barback's '60's kitsch-flavoured promo for Broadcast's "Papercuts", Lyn Fox's creepy insectoid vision for Chris Clark's "Gob Coitus"...but the one's that are initially fascinating me most are the early small-budget affairs. Martin Wallace and Jarvis Cocker's promo for Sweet Exorcist's "Testone" is a delightful period-piece. Probably put together with a fifty-quid budget, they equate "Testone"'s bleepy sonics with old skool Space Invaders computer games and a surreal revival of the old BBC testcard, where the little girl with the blackboard breaks out of her confinement to play with beach balls and a VCS-3 synthesiser. 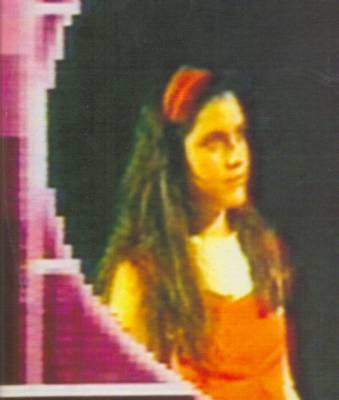 The pre-computer graphics primitive video effects are thoroughly charming in my view, particularly apt as they accompany the music of Richard H. Kirk, who was himself something of a pioneer of DIY video art (note: Mute will be re-issuing Cabaret Voltaire's seminal "Doublevision" collection on DVD very shortly - more on that soon..).

Less famous than it's older sibling and, to date, only ever available on vinyl, "Testthree" is the one where they strip the track down to it's rhythmic core, add an eerie, sustained warble and then douse the 'bleep riff' in some tasteful echo.

Warpvision also includes a bonus audio CD - "Watch and Repeat Play", where Buddy Peace and Zilla take us on an an hour-long trip through the Warp back-catalogue, artfully editing loops and fragments together to create an hallucinogenic alternate reality. I'm gonna be a bit cheeky here and post-up a short section, for 'evaluation purposes only'. This is where my favourite piano interlude from Aphex Twin's "Drukqs" gets beefed-up with some phat breakbeat action. Check it!