I thought I'd conclude 'mid-80's' week with a real technological oddity of the era: 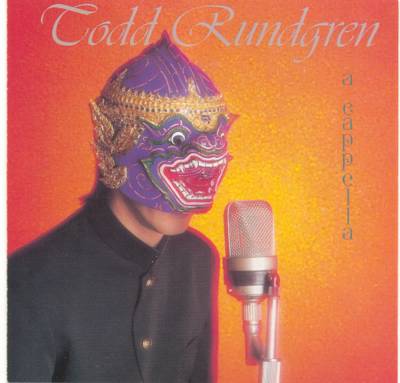 Like Arthur Baker and The Latin Rascals, the first time I ever heard of Todd Rundgren was from reading the credits on a Hall & Oates record - in this case their 1974 album "War Babies" which I blew my pocket money on sometime around 1982 because it was going cheap at my local record store. At that time, "War Babies" was the weirdest record in my miniscule collection. Recorded when Rundgren was at the height of his belated LSD phase, his heavily psychedelic/electronic production techniques resulted in the most confounding (and no doubt poorest selling) album in the whole Hall & Oates back-catalogue. But again, that's another story.

I had no knowledge of Rundgren's vast legacy as an artist/producer at that time (he was always a marginal figure in the UK anyway) and it wasn't until 1985, when I read a review of his latest album "A Cappella" in Melody Maker, that he would enter my life again. It wasn't a very positive review. In fact the reviewer (who's name I forget) completely slagged it off for being an exercise in over-produced, self-indulgent wank. For some reason that didn't put me off buying it, though. And when I got it home to play it on my crappy little music centre, I thought it was brilliant. Listening to it again now, I reckon it's still at least 35% a good record. Put it this way: when I came across a secondhand CD copy a couple of years back, I jumped at the chance to buy it.

When we talk about the early history of digital sampling, it's usually from the viewpoint of hip-hop. But what about those artists working outside that medium, who had no interest in sampling bits of other people's records? I can imagine Trevor Horn and his ZTT chums standing knee-deep in packing materials, staring at their new Fairlight CMI. "So...what shall we sample then, folks?" asks Trevor. Everyone scratches their heads for a few moments, until JJ Jeczelik pipes up from the back of the studio: "Er..how about the sound of my car ignition?".

When Todd Rundgren took delivery of an Emulator, the first thing he thought to sample was his own voice. But typically he was already making several conceptual leaps at once and quickly realised that he could make an entire record using just his voice. Everything from the drums upwards could be created using his vocals, processed through the Emulator. And so "A Cappella" was born.

Actually, there's about three songs on it that are genuine acappellas, where Rundgren uses the tried and tested multitrack method to create a legion of Todd-clones in perfect harmony. But it's the Emulator-enhanced tracks that really stand out. Admittedly, the single "Something To Fall Back On" betrays it's vintage by incorporating those typical novelty pitched vocal effects, whilst "Lockjaw" uses a dense layer of tribal grunts and chants to create a suitably ominous mood for it's frankly bizarre story of "an ogre named Lockjaw" who stalks children that tell lies and "nails their jaws open with a rusty nail, using his head for a hammer" (!?) .

This is the opening track which is one of the more artistically successful songs. Rundgren creates a dynamic rhythm track by sampling various plosive vocal noises - an inhuman beatbox. I always got a bit of a buzz from the 'drum break' section near the end where a flurry of cha-cha-cha's suddenly come in. Rundgren's lead vocal is as good as it gets - for me he's one of the great white, male, American soul singers, along with Daryl Hall and Alex Chilton. I'm sure many people will think that's utter bollocks, but it's just that I find that type of vocal particularly pleasing to the ear. If pushed I'd also give props to Michael McDonald.

For me, this is undoubtedly the highlight of the album, the track where Rundgren transcends the novelty-value and creates a really beautiful, evocative, soulful piece of futuristic balladry. Using a gently undulating rhythm of clicks and pops with a sequenced baritone doo-wop bassline, Todd drops all the 'eccentric' lyrical themes and goes straight for the heart with a searching, plaintive tale, delivered with the kind of vocal presence that a group like the Junior Boys, great though they are, can only ever aspire to.