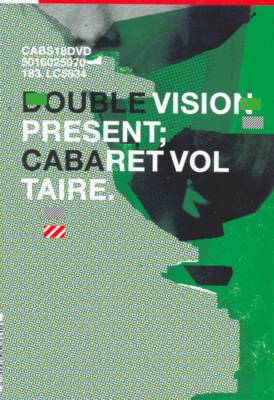 It seems faintly ridiculous to be watching these primitive, grainy, lo-rez video montages on pristine DVD format, but the fact remains that this is a vital document of one of the earliest independently produced long-form video compilations. In any case, the degraded textures on display provide a refreshing contrast to the clean, digitally-enhanced images of the modern world. Occasionally I see 'arty' stuff in the media that seems to be emulating these early D.I.Y. experiments, and I like to think that they've been quietly influential to some of today's film makers.

Doublevision was conceived in 1982, by Cabaret Voltaire and Paul Smith, as an outlet for affordable music-based video releases and over the next few years they released landmark works by Throbbing Gristle, Derek Jarman, The Residents, 23 Skidoo, Einsturzende Neubauten and others. The label subsequently expanded to release music-only material by artists such as Lydia Lunch, Clock DVA, The Hafler Trio and Chakk.

Doublevision Present Cabaret Voltaire was the label's first release. It includes all St. John Walker's visual representations of the Cabs classics like "Nag Nag Nag", "Obsession", "Seconds Too Late" and "Photophobia", an extract from Peter Care's short film "Johnny Yesno" (for which the Cabs provided the soundtrack) and a host of other experimental montages by Kirk & Mallinder themselves. Applying the same approach to 'found material' that they used in their music, most of these feature an intriguing flow of images culled from film and television, cut together with self-recorded images of the group in various settings. The result is a confounding barrage of visual stimulation, ranging from the provocatively extreme (police brutality, riots, religious extremists, accident victims, hardcore pornography) to the banal (sci-fi B-movies, the Cabs' holiday footage and...hardcore pornography). 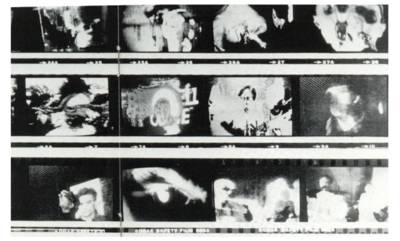 Perhaps the easiest way to explain the ethos behind it all is to reproduce an extract from Mick Fish's Cabs book "The Art Of The Sixth Sense", where he discusses the methodology in some detail with Kirk and Mallinder, who have always been very honest and forthright when it comes to explaining their work. Although long out of print, all the interview material is included as an appendix in Fish's latest excellent book "Industrial Evolution - Through The '80s with Cabaret Voltaire", where he recounts his days as a member of the Cabs' entourage.

As a group you have always put a heavy emphasis on the visual side of your presentation. This culminated in your own video label Doublevision. You obviously considered that there was scope for an independent video label at that time?

Mal: Yes, as we progressed we realised that we were in the position to achieve some of the things that other people had talked about. In particular, the link between the music and the use of visuals, film and video. In our own quiet way we found that we were able to fill a gap in a practical way.

When you set up Doublevision you presumably had a lot of footage accumulated that you had used in live performance over the years. Your first video release, like a lot of the films you use live, contained a great variety of footage including the violent and political as well as fairly anonymous imagery. Was it just a case of throwing in everything but the kitchen sink?

Mal: With the visuals it is very much like that. I don't think we can discard the chance element, the whole idea of the cut-up principle. I think that if we threw that out of either our films or music, we would probably make everything we have done in the past redundant. I think if we tried to synchronise the visual side with the music, we would be doing nothing more than the early Human League did. With us it is more a case of chance juxtaposition, but remaining selective about the material we choose to use.

So, it is more of a blanket presentation rather than trying to make a point at any stage?

Richard: That's true to a certain extent. I think it goes back to the Dadaist notion of being mischievous, just playing around juxtaposing different images and sounds and seeing what the end product is.

There would appear to be an amoral attitude in the presentation of a whole range of visual material which leaves people to make of it what they will. Is it important to you not to be making a particular point?

Richard: Yes, because if you take a moral standpoint it becomes something you are known for, a millstone around your neck that you may get stuck with.

Couldn't you be criticised for sitting on the fence and hedging your bets?

Also relying heavily on chance elements, aren't you laying yourselves open to the criticism, "Anyone could do that", or are you saying that you have a special instinct for it?

Mal: definitely an instinct. Only an idiot could believe that it was totally random. It all depends on what you choose to include. That is where you stamp your identity on it. The point is, we choose the source material, we choose what to cut up, we choose what to juxtapose.

Is your success at this selection process because you have a clearer idea of the images you want to portray, or because your instinct for imagery is better than others?

Mal: I would go for the latter, because we still feel instinctively what will look or sound right - or on the other hand what is not visually right for us.

Richard: I can't really explain a lot of what we do, I don't know why we are doing it half the time. It is only afterwards when I sit down to think about it that it makes sense. It is a very instinctive thing.

So, it is not actually knowing what you are trying to do, but instinctively feeling it?

Mal: Yes, exactly. I think if we knew exactly what we were trying to do it would be too conceptual, and we are not those sort of people. That is where we differed from Throbbing Gristle, who we were often compared with in the early days. They had a conceptual idea of what they were doing and what they wanted to get across. It's the same with Psychic TV, it is very much a game to them in the sense that they know what they are saying, and if you rumble that you are in. That is all very well, but I don't think we play that sort of game.

From watching some of your videos, it would appear to me that you have been fairly successful in throwing images back at people, especially news footage, that are familiar to them and highlighting those images in a different context.

Mal: I think what we do in a very primitive way is throw back some of those images. I don't know whether the way we use media footage actually works in terms of people recognising some of the biased and hypocritical aspects of the media - or whether it is just that the pictures look nice and they fit with the music.

You mean pure flirtation with imagery?

Mal: Yes, exactly. You can talk with hindsight about a lot of these things but I'm sure for a lot of people our use of imagery just looks nice. Maybe that is a lot of the appeal for us as well.

This goes some way to explaining my own allegiance to the Cabs' approach. I've never liked being preached to and often found the explicit agendas of groups like TG a bit off-putting. I value my status as a 'free thinker' (or perhaps terminal 'fence-sitter'?) and so feel more comfortable with the Cabs' incongruous messages, which stimulate opinions and emotions in one's own mind. Not necessarily logical, well-thought-out opinions, but mine, nonetheless. Kirk and Mallinder's gift was to open a portal in the mind's eye; to snatch seemingly unrelated imagery and fuse it together to reveal new meanings and associations that, rather than commenting on society, provided a more multi-faceted (and paradoxically clearer) view. That these images continue to resonate over 20 years later is a testament to their abiding power.

Buy the DVD from Mute Bank or Amazon

Both MP3's featured are available as extra tracks on the CD issue of "The Crackdown", available from Amazon.