If anyone down at my local pub wants to know anything about Grime, then I'm the man to ask. Most people in my 'hood wouldn't know a Grime tune if it sneaked up and popped a cap in their ass. Grime's a London ting, innit? In reality I'm weeks, or perhaps months, behind what's going on in the scene(s), I just do my best to try and keep an eye on major developments, almost exclusively via blogs. If you really want to know what's hot in Grimeworld, then you must check-in regularly at SilverDollarCircle. It's not an MP3 blog, but it doesn't need to be. Simon's evocative descriptions and boundless enthusiasm for the genre are enough to get me salivating with desire. Other pro-Grime blogs like Kid Shirt, Blissblog, Pop Life and Woebot will occasionally impart words of wisdom on the subject. I'm not aware of any MP3 blogs that regularly champion Grime tracks (and if you're out there, please make yourselves known to me), so I'm sort of filling in some of the basics here.

For me to try to write authoritatively on the subject of Grime would be a fucking joke, but I feel that I need to say something about it in my bid to cover the most exciting new sounds in the world of electronic/dance music, so I'm going to attempt to explain the genre as best I can. This is for my own benefit more than anything else - a way for me to organise my thoughts on the matter -but which may also prove to be a useful starting point for the Grime-curious out there.

Wot Do U Call It?

One of the first hurdles to overcome is to define what Grime actually sounds like, who the major players are and so forth. This is complicated by the fact that there appears to be two distinct schools of Grime - the East London 'Roll Deep' axis and the more geographically diverse group of Rephlex-affiliated artists. Both have a similar pallet of sounds and beats, though the Roll Deep style is generally more rooted in hip-hop tradition, being an uneasy alliance of 'Crews', fronted by MC's, yet with a curious, almost naive sense of pop melody. Rephlex Grime tends to be 'trackier' (ie, instrumental), dark 'n' moody and made by 'lone-wolf' bedroom producers.

To complicate things even more, the name 'Grime' itself is a subject of much heated debate. I believe the term originated from the Roll Deep Crew's central figure, Wiley, although he now prefers to call it 'EskiBeat'. Some people simply feel that the name, with it's scummy, unclean imagery is unsuitable for a sound that is so clean, burnished and digital. Perhaps 'Gleam' would be a better description?! But I guess 'Grime' sums-up the ghetto-centric origins of the genre and seems to have stuck as the most recognisable brand-name.

How big is Grime?

As I said, most people I know in Bristol haven't even heard of a genre called Grime. Perhaps my obsessive blog-reading is giving me a distorted view of it's importance. It certainly doesn't appear to be making a big impact in the mainstream media in the way that, say, Acid House or the first wave of UK Garage did. The most high-profile artist to emerge is former Wiley protege Dizzie Rascal who, like Ronnie Size before him, has seen his stock increase since his debut album "Boy In Da Corner" won last year's Mercury Music Prize. Still, my wife's never heard of him (not that that means much, to be honest). I think it's fair to say that Grime is still very much an underground scene, focused in London but with pockets of enthusiasm dotted around various parts of the UK and beyond. No doubt Bristol has it's own Grime-aware scenesters, I just haven't met any of them. This is sort of proved by the small but varied Grime section at Rooted Records on Gloucestershire Road (Kek-W take note!)

Today, I'm going to focus my attention on the 'original' East London Grime scene. You might like to read SilverDollarCircle's "Grime Survival Guide" over at Stylus for a more authoritive view, as Simon's taste in Grime is very biased towards the Roll Deep axis. 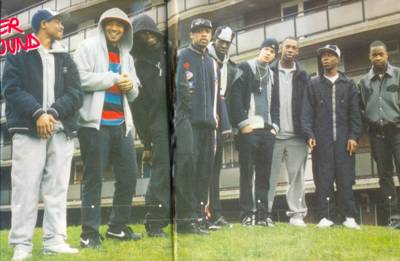 My first exposure to this scene was in April last year, when I read a two-page article in (the now sadly defunct) Muzik magazine about Roll Deep. Chantelle Fiddy took the angle that Wiley and Co. were coming to claim So Solid Crew's UK Garage crown, which suggests that Roll Deep were still considered to be a straight UKG act, as opposed to a whole new mutant strain. Interestingly, there's no reference yet to the terms 'Grime' or 'Eski' here, although mention is made of Wiley's genre-defining 'Eskimo' track.

The Muzik feature holds Wiley entirely responsible for the upsurge in instrumental tunes in the UKG scene and by all accounts this track electrified the crowds when it came out. Being more inclined to 'tracky' stuff anyway, it was this sort of vocal-less approach that first attracted me. "Eskimo" features the first example of that distinctive hollow synth-bass that is so crucial to the Grime sound. There's also a second bleepy riff that reminds me of early LFO and a sort of eastern-tinged melody that sounds like an old Mellotron flute sample. Simon makes the point that Grime sees a return to riff-based tracks, whereby the music is propelled by the keyboard parts, with the percussive elements providing a secondary counter-rhythm. "Eskimo" also illustrates the very clean, almost transparent production values that typify the genre, with very little in the way of signal processing (echo, reverb etc) or abrasive textures. It's a very pure, crystalline sound similar to early Bleep 'n Bass. I really rate Wiley's instrumental versions - I could just fill this post with 'em! "Ice Pole", "Snow Cat", "Eski Boy","Shanghai"....it's all gold.

The other tune namechecked in the Muzik article, dominated by Dizzee's incendiary rhymes, reveals that MC-driven Grime is perhaps the most successful/convincing British alternative to American Rap yet. Although there are hints of Dancehall/Hip Hop tradition in Dizzee's delivery, the end product is explosively original and it's no surprise that he went on to become the nearest thing so far to a Grime 'superstar'. This track serves as a reminder of what a brilliant combination of talent Wiley and Dizzee had together. It's a shame that they seem to be taking verbal swipes at each other these days, but I don't want to go into all the internal politics stuff so enough said..

Another of the Roll Deep Crew, so called due to former chronic smoking habit. This is a nice little instrumental cut that highlights Grime's penchant for spiky orchestral stabs, the sort of synthetic approximations of real instruments that you can get straight off any sound-module. These little orchestral riffs remind me of things like Yello's "The Race". Like Wiley, Danny uses these sort of ready-made sounds in a very straightforward, unselfconscious way, building just a basic arrangement, leaving the listener to fill in the blanks mentally. He's also added his own little touch here - a dubby element, flying in bits of echo-drenched 'found dialogue' which is very Richard H. Kirk and so of course highly endorsed by me.

One more from the master, to demonstrate his unique abilities as an MC. Though not as sharp or startling as Dizzie's delivery, I find his technique really refreshing. Although much is made of Wiley's claim to feel 'cold' inside (conjuring romantic images of a wintry shadow crossing his heart), I feel a lot of warmth and humanity in his rhymes. Rarely does he resort to blustering belligerence. He tends to reveal a surprising amount of his inner feelings and elements of his personal life, maybe a little too much sometimes. This track comes from the CD single "Wot Do U Call It?", which preceded his XL debut album "Treddin' On Thin Ice" earlier this year. It's a really heartfelt relationship song, where Wiley is trying to reconcile his hectic Grimey lifestyle with the needs of his lady friend. We've all been there at some point, right?

There's so much Roll Deep output to cover, it's a mini essay on it's own. But there are several other Crews who have followed Wiley's lead, who I'm still trying to assimilate and document. This will have to be the subject of a future 'GSI' feature. For now here's a track by the main player in the More Fire Crew, Lethal B. This is a really rampant, dramatic tune propelled by manic 808 handclaps, spiky fairground organ riff and a relentless barrage of rhymes from Mr. B and Crew, which has been one of the biggest Grime tracks this year. Hold on tight, it's a white-knuckle ride...

Easiest to obtain at Amazon and the like are Wiley's "Treddin' On Thin Ice" and Dizzie Rascal's "Boy In Da Corner" and "Showtime" (all on XL). As for the rest, it's still an underground thing so best to trudge off to your local independent dance music specialist record shop and flick through the twelve-inchers in the Grime section (if it has one!) or surf around for MP3's - there's some cool DJ sets at Soundclick. Happy hunting!
Posted by N.E. at 1:01 AM