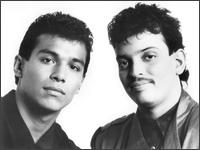 After giving props to Mantronik yesterday, I felt I had to shine the spotlight on those other '80s 'edit-kings', The Latin Rascals. The Rascals were Albert Cabrera and Tony Moran, pioneers of 'continuous mix' shows on local NYC radio in the early '80s, who soon made an impact as producers/remixers in the US dance scene. Their shithot editing style was employed by everyone from New Order to Bryan Ferry. The Rascals' edit of "Bassline", was the opening cut on Mantronix's first album - and no doubt young Curtis was looking over their shoulders the whole time, picking up some hot editing tips on his road to glory. Woebot got briefly excited by the Rascals back in January last year. Although I've never really looked too deeply into their back-catalogue, I've been a fan of their remix work ever since they blew my head off with a Hall & Oates mix back in '85 (see below). Here's a little selection of Rascals old skool remixology, full of latin percussion grooves (strictly drum machine stylee, of course - like a more electro-flavoured Derrick May), high-precision stutter-edits and the kind of mad pitched vocal samples that are so evocative of the era.

Kicking things off in a gentle fashion, this is a highly infectious 'Freestyle' tune which I think sounds utterly...gorgeous. Hearing those jittery electro beats and flashy synth riffs again almost makes me think that Chicago House ruined Dance Music. Certainly this moves my ass more than the Vocal House tracks that came shortly after (Acid House is an entirely different matter though). The Rascals don't really make their presence felt until about the three minute mark when things suddenly go all Max Headroom (who was himself surely a by-product of the 'Edit' remix style?) , eventually leading into a nice mixing desk jam, with lashings of echo on the vocal, dropped in 'n' out Dub stylee.

Not convinced by my recent MP3 of Harold's original? Then surely the Rascal's stutter-funk makeover will seduce...

Although they never broke through to the UK pop charts, TKA were one of the premier 'Freestyle' acts of the day - that tasty blend of latin-flavoured hip-hop/electro beats and soulful vocals which was huge for a while in the mid-80's (and probably still is, somewhere). There's a lush Mantronikish breakdown mid-way here that still thrills me.

I saved the best for last. This is an extreme example of the 'extended remix', where the short introduction to Hall & Oates' "Big Bam Boom" elpee gets stretched-out into an orgy of latino percussion and beat-fuckery. Check those guitar riffs - this is a true rock/dance hybrid. Hall & Oates had been flirting with 'street culture' since the "X-Static" album back in '79 (featuring the extended groove of "Running From Paradise" and a Ghetto Blaster on the cover), but their association with Arthur Baker and Co. in '84 was where it was most overtly stated. And I don't believe that their decision to move into the dance arena was in any way cynical or calculated - I vaguely recall a Record Mirror interview with Daryl where he spoke of his 'pride' that New York had spawned Hip Hop - they were genuinely excited by the creative possibilities. Although production & mixing on this track is credited to Arthur Baker, it's the Latin Rascal's extra editing flare that really tips it over the brink.

Post-script: In case you missed Dan's comment below, apparently Big Daddy Magazine has been running a feature on the whole history of the edit/remix phenomenon recently. I'm gonna look out for it...
Posted by N.E. at 12:03 AM