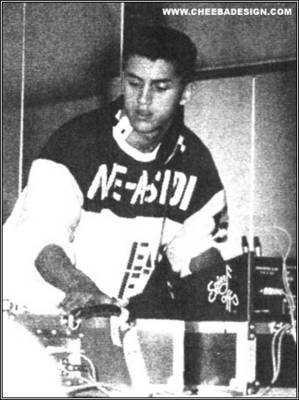 I've been following the "Turntablism" series over at the Idiot's Guide with keen interest. Loki and Kek-W's two-pronged exploration is fascinating. I think my first exposure to the concept of 'Turntable Manipulation' must've been seeing the video for Malcolm McLaren's "Buffolo Gals" on TOTP back in 1982. The general reaction amongst my family members (me included) was "what on earth are those men doing to those records?!" Luckily I was young enough to instantly assimilate this new form of expression. I still really love hearing genuine (raw) DJ techniques in action. Still, thought I'd better champion the other side of the coin - the DJ-studio-sampler interface. And what better way to illustrate it than with some tunes by my '80s Hip-Hop hero Curtis Mantronik.

I wrote a post about how I discovered and learned to love Mantronix (and some stuff about the cultural climate of my 'hood' (ie. a shitty little Bristol outpost called Yate) here, so won't bother going over that again. The fact remains, Mantronik was truly blessed with all the skills needed -turntablism, tape-editing, sequencing, drum programming and sampling - for some outrageously advanced shit that still holds up well when compared with the technologically advanced efforts of today's sound-manipulators. It wouldn't be an exaggeration to say that Mantronik was my Hendrix.

As I've already revealed, it was Martin Rushent who first had the idea to emulate turntable techniques using the studio. Inspired by Grandmaster Flash, his pioneering work on "Love & Dancing" in turn revolutionised dance music production in the States. The 'hot' US producers of the day, like Arthur Baker and John Robie, pushed the possibilities further. But by 1985 there was a new kid on the block who could out-scratch Flash and out-edit Baker: Mantronik had arrived and nothing would ever be the same again. His first three albums with MC Tee pretty much wrote the rule-book on what could be done when the new sampling technology was pushed to the limits. The showpiece of the albums was always the 'Mega-Mix' - where Mantronik showed-off all his latest tricks in a confounding cut-up of all the elpee's best bits; a jaw-dropping excursion into the outer limits of beat-splicing perfection. I present all three here for your listening pleasure...

The concept isn't fully in place yet - the Mega-Mix appears at the end of side 1, as opposed to being the album's grand finale. Using "Needle To The Groove" as the basis, this is a heavenly blend of 808 beats, Fairlight orchestral stabs, brutally efficient scratching and juddering stutter-funk dynamics. The edits are sharp but still relatively tentative compared with what's to come...

Now this is where things get really heavy. As the whole "Music Madness" album flashes past your ears in an hallucinatory extravaganza of beat trickery, one could be forgiven for thinking that this was put together on a Powerbook. But no, it was done with...christ, I just don't fucking know how he did it! It's 1986, but might as well be 2006. Curtis's ultimate solo.

More of the same, but with a few more tricks on display, notably a hyper-fast crossfader effect that reduces the track to a shimmering blur of clipped audio fragmentation. Perhaps Mantronik felt that he'd taken this shit as far as it could go, because after this he dropped MC Tee, went into a slick R'nB phase and had a huge smash with "Got To Have Your Love" as well as producing some top-notch commercial electro-soul for Joyce Sims. Whatever the reasons for his change of direction, he left a legacy that would take years of software development to even get close to emulating. I can hear Mantronik in the music of Squarepusher, Kid 606, Prefuse 73, Aphex Twin's "Windowlicker".....wherever The Groove is being juggled in exciting new exploratory ways, wherever audio manipulation levels hit The Mind-Fuck, you'll find the soul and methodology of The King Of The Beats.
Posted by N.E. at 11:30 PM