A big thanks to Ed DMX for pointing me in the direction of Bluesynths, a rather spiffing site dedicated to cataloging the many weird and wonderful machines known as Analogue Synthesisers. Lot's of tasty jpegs and audio clips on offer, allowing you to sample the particular textures and stylings of these antiquated, yet still desirable, knob-infested beasts.

I've used quite a few of the damn things over the years. During more affluent times, I had anything up to eight or nine of 'em at a time! These days I have very little equipment at all. Looking at these superbly reproduced close-up images is almost like seeing an intimate photo of an old girlfriend. The 'hands-on' nature of analogues, coupled with their unique features and quirks, does tend to make one build up a sort of 'relationship' with them. They can be stubborn, unpredictable lovers, capable of blowing your mind or trying your patience, in a way that virtual software plug-ins never could be.

I'm inspired to take a trip down memory lane. I dug out some old DATs full of early analogue experiments - non-midi improvised stuff. Having begun making music with cheap Casios, followed by an Amiga computer, the shift backwards to analogues was a whole different experience. Later I would begin to integrate these synths with Midi/sampling, but the initial 'honeymoon' period (roughly mid-1993 to early '94) was all about pure analogue exploration, playing 'live' and building the music using a multi-track.

The first analogue I ever bought was a Moog Prodigy in early 1993. My mate Neil had spotted it in the window of a music store, with a £90 price-tag, and thought that it might be my sort of thing. A quick try-out in the shop was enough to convince me to part with my cash. 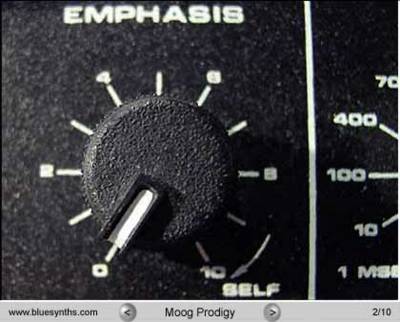 Detail of Moog Prodigy - I was an analogue virgin till this baby took my cherry.
MP3: Throb

I reckon this is probably one of the first pieces I did with the Prodigy, maybe within the first 48 hours of getting it home. Of course, it had no manual with it and I had no previous experience, but the clear, intuitive controls were fairly easy to get to grips with. A perfect learning tool, no less. It had no memory patches, so everything was created from scratch, sculpting the sounds from lumps of audio clay. Analogue = subtractive synthesis; everything's there already, it's what you choose to remove that dictates the sound. Clearly, the droning, swooping monotony of 'Throb' is the sound of me getting my rocks off. I hope you'll forgive me... 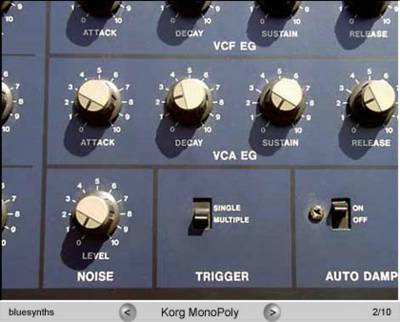 Detail of the Korg Mono/Poly, another synth I had 'sexual relations' with. Dirty bitch!
MP3: Random Pulsations

My next vintage synth was the Korg Mono/poly. I remember buying it in August '93, shortly before I got married. If my fiance had ditched me at the alter, I would've rushed home, grabbed the Korg and married it instead. Four independently tunable oscillators and a wicked arpeggiator were just some of the new features for me to explore. I used the arpeggiator to build-up some glitchy rhythmic backing tracks, as on this tune, which is a personal favourite from the period. The lead melody was supplied by the Prodigy, the rest is all Mono/Poly madness with some digital delay effects.

I seem to have made quite a few atonal experimental pieces with the Korg. It was capable of some really avant-garde sonorities, which I exploited to the max. This is one of the (thankfully?) shorter pieces, probably done in one-take with no overdubs; 100% improvisation. 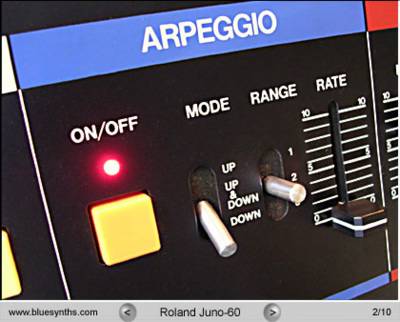 Detail of the Roland Juno 60 - this polysynth was an insatiable slut.
MP3: Datasea

My first proper polyphonic analogue was the Roland Juno 60. It had digital oscillators (so very stable tuning) and a memory bank (!) but otherwise it was strictly old-skool. The Juno was a much more 'smooth' sounding synth, capable of harmonically rich, crystalline tones...perfect for mid-90's Neo-Detroit sophistication (more on that another time) and with a beautiful built-in chorus effect that livened-up even the dullest patch. "Datasea" is a pleasant example of the tranquil moods (don't say 'new age'!) that it excelled at.

But just to prove it could sound a little more gutsy, here's a track where I used the Juno to create a stampeding pseudo-kick drum rhythm overlaid with some vaguely spooky sound effects.

Well, I think that's more than enough to try everyone's patience for now. But what the hell, it's my blog so I'll indulge myself if I feel like it. Remember folks, Gutterbreakz is an entirely selfish enterprise - it's all ME ME ME first. Feel free to slag it off. I could do with getting my ass kicked. Let the backlash begin!
Posted by N.E. at 10:22 PM