I've been meaning to post this for a few days. It's my own tribute to the late John Peel. Back in 1987ish, I was an avid listener to his show, basically for the Hip-Hop and House stuff he was playing. I used to make compilation tapes from his shows; everytime something came on that sounded cool I'd release the pause button, which is why I often missed the first couple of bars of the tracks. I've finally gotten around to transferring a few tunes to MP3, from the original FM broadcasts, mainly stored on those cheap Philips C60 cassettes they used to give away in petrol stations. Listening back now, most of the House tracks he was playing sound really dated to these post-millennium ears. But many of the Hip Hop tunes still sound wicked, just the way I like 'em...

One of my favourites. This is the sort of avant garde, anti-music that I always thought Hip Hop should be. Absolutely no concessions to melody, basslines or even conventional instrument sounds - it's just beats, scratching and sound FX. Who the hell was Witchdoctor? The guy was a visionary! Nice stealthy delivery by the Dominating Three too...

The great Marley Marl wrecks shit big time on this jam, 'dedicated to the white DJ's'. Violent scratch breakdowns, blasts of rock guitar (very popular at the time) and what sounds like a dentist's drill making an appearance at one point. I never really got into stuff like Eminem or even Wu-Tang. It just don't sound as good as this shit to my ears.

Being a teenager with a busy social life and no concern for future historical documentation, I wasn't too concerned with making a note of things like track titles or artist details. I just wanted some cool noises to play on my walkman or on the stereo in my battered Ford Cortina. I've only just located the correct credits for the above tracks by searching Discogs, using the lyrics for clues.

I just figured out that this is Ice Cube with K-Dee and Sir Jinx. This track is a riot - the MC's really go at it, like an old skool L.A. version of Lethal B's 'Forward Riddim', and the turntable skillz are bloody savage. And if you look closely at the label jpeg I found (see below), you'll notice that this was produced by Dr. Dre. Wow! Nice little historical artifact from the NWA axis. 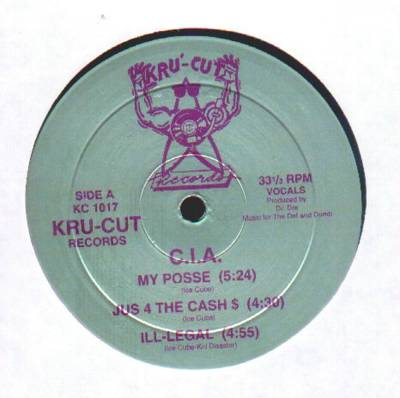