Paul Automaticforthepeople continues his gradual metamorphosis into an MP3 blog with yet another forgotten gem from the bottomless pit of NRG resources that is Rave Culture. "...a pretty decent tune from that moment when 909 kicks were giving way to stuttering breaks" says Paul. Indeed. I find that whole early-90s Hardcore scene fascinating. Observing in retrospect the gradual evolution of the breakbeat from mere workmanlike adornment - simply adding an extra element of funkiness to those otherwise fairly clinical 909 patterns - towards the 'rhythmic danger' and breakbeat science of Jungle/D'n'B.

The Belgian scene never really got as far as Jungle. It evolved in completely the other direction, ultimately leading to the speedcore machine-muzik of Gabba (one of the interesting things about current 'Amentalist' artists like Shitmat is that they combine those two seemingly disparate strands - incorporating whiter-than-white Gabba-fascism with black-as-night ragga/jungle influences). But for a time, commencing around 1990 and reaching it's commercial zenith in 1991, breakbeats were everywhere in Euro-rave. The archetypel Belgian hardcore sound of, say, T99's "Anasthasia", combines the dark, riff-driven techno of Beltram with an efficient, unedited breakbeat loop and accessible arrangements that betray it's origins in Hip-House. Yes, Hip-House. That commercially viable blend of hooks, raps and breaks underpinned by the omnipotent 4/4 kick of House that was a brief phenomenon at the end of the '80s that made stars of everyone from The Beatmasters, The Rebel MC and the lovely Betty Boo.

Turns out that the Belgians were quite adept at utilizing this particular style. Witness Hi-Tek 3's delightful Top 20 hit "Spin That Wheel", featuring uber-bitch Ya Kid K. Originally released on the Belgian ARS label, it's subsequent licensing in the UK by the Brothers Organisation proved an astute move, especially when it was tied-in with the Teenage Mutant Ninja Turtles movie. 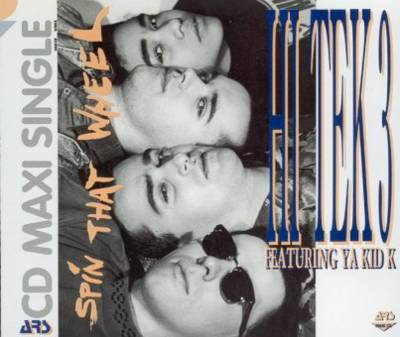 Of course, Ya Kid K was already well on her way to brief stardom, having provided the vocal on Technotronic's mega-hit "Pump Up The Jam", which peaked at #2 the previous year. The brainchild of Belgian producer Jo Bogaert, Technotronic would go on to rule the UK charts throughout 1990. Although mildly dissed by LFO at the start of "What Is House", I always had a fondness for Technotronic's clinically precise take on Hip-House. By that I mean I'd always turn-up the volume on the radio whenever hits like "This Beat Is Technotronic" came on. Think of it as a guilty pleasure, like Girls Aloud today. And let's not forget that Grime/Dubstep producer Plasticman saw fit to excavate "Pump Up The Jam"'s rallying cry recently. Bogaert rarely used breakbeats in his productions, favouring a very pure synthetic europhile sound that still managed to sound irresistibly groovy. 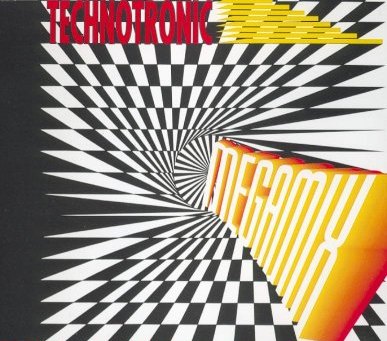 I've been dying to post a Technotronic tune for ages. Couldn't decide which one though, so opted for the megamix cash-in (#6 in October 1990) which features all the hits up to that point, edited together in a post-Latin Rascals stuttery style, and featuring just about every Hip-House cliche in the book. Marvelous!

Next time I'll be taking a look at the post-HipHouse Belgian breakbeat rave stuff that exploded into the UK charts like scud missiles throughout 1991, but for now let's just take a quick detour to The Netherlands, and a track released that year on the mighty 80 Aum Records.

From the 'Volume 1' EP (not sure if there was a volume 2), this track might not have crossed-over to the charts over here, but it's a perfect example of what was going on. Taking it's lead from Beltram's "My Sound", but adding euphoric lashings of staccato bleepy rifferama and a healthy dose of breakbeat undertow, "The Spirit" remains a beautifully preserved period-piece. Your ass moved, or your money back.